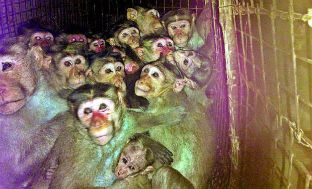 An apartment complex on Hosur Road was raided by the Forest Mobile Squad to free 22 trapped monkeys, bonnet macaques to be specific, on Sunday midnight.

The flat owners at Lakshmi Symphony Apartment, who trapped the monkeys and a Hakki Pikki tribesman, who caught them were arrested. The monkeys were found bundled in a small net. But they were all in good health and the entire group was released into the Cauvery Wildlife Sanctuary.

Some apartment owners, who were opposed to the trapping of monkeys, alerted the BBMP Forest Cell, which handed over the case to the Forest Mobile Squad.

The officials said that Ramu, who hails from Punganur in Andhra Pradesh, carried a permission letter issued by the forest department to catch monkeys at Vagdevi Vilas School. "We suspect that he was carrying a photocopy of the same letter, claiming it to be an authorization to catch monkeys anywhere. We also suspect that he could be involved in catching of monkeys in other parts of the city too," said an officer from the squad. Cases have also been booked against two apartment owners.

Sharat Babu from the BBMP Forest Cell said that there were incidents of conflict between apartment dwellers and macaques. A number of apartments have come up in areas, which were once dominated by urban wildlife, primarily macaques.

“Since they have lost their natural habitat, there has been a change in the behavior of urban monkeys. They can survive on anything that we eat in our daily lives. One should stop feeding the monkeys," said Babu.

"In many parts of the city, there have been incidents of monkeys attacking apartment dwellers. The people should stop feeding monkeys, which are wild primates equipped to get their food without anybody's help," said Daniel Sukumar, a wildlife expert.