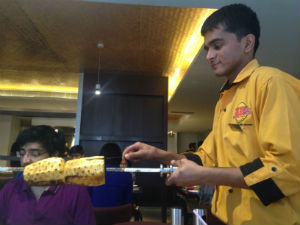 Bangalore may have more than its fair share of barbecue joints. But it could certainly do with one more. Especially if that one more is Absolute Barbecues or AB’s as it is referred to in short.

AB’s opened in November 2013 and offers customers an on-table-grill, a buffet and a “wish grill,” which is what sets them apart from other similar outlets.

The wish grill is a live counter where customers can take their pick from rabbit, quail, baby octopus and emu meat, and have it custom-cooked on the large tawa. Imagine the options at Subway but without the bread. They have a small but good variety of sauces including sambal olek, teppanyaki and something called toofani Indian masala.

We tried the emu meat, a first time for me, in three variations, each as delicious as the next. The rabbit meat, another first, is tender. Both meats don’t require you to develop a taste and if you’re not one for adventurous eating, AB’s is a good place to start.

The first round of grills that are served include a skewer or two of everything on the menu. Tangdi kabas, mutton sheekh, chicken, prawns, fish, mushroom and paneer arrive, all of which are already adequately spiced and pre-cooked. If that’s not enough for you, the table is lined with spray on chilli garlic oil and pepper oil.

The meats are perfectly cooked and the flavours are in line with the Indian palette – spicy, juicy and robust.
Just when I thought the spices were beginning to impose, a waiter appears, holding two whole pineapples on a skewer in one hand and a knife in another.

He rescued us from our momentary confusion by introducing us to the grilled honey-cinnamon pineapple, of which he cut us each a sliver. The burst of sweetness paired with that tinge of spice from the cinnamon brought a wonderful balance to our meal.

The grills at AB’s are good enough to not know when to stop. But if it’s your first time at the restaurant, it would be wise to reserve some space for the buffet.

The buffet is not extravagant but more than satisfactory. Among the non-vegetarian options, there is Peshawari chicken curry, Sri Lankan prawn curry, Mongolian fish curry and a mutton curry. Among the vegetarian there is bhendi masala and an AB’s special dal, which is nothing but dal makhani and tastes rich and creamy. There is also biryani and a choice of salads.

For dessert, there is more assortment than necessary. Phirni, indrani, strawberry and pineapple mousse, cake, fruits, honey puffs and of course ice cream make up the dessert counter. You can choose from strawberry, butterscotch and chocolate ice cream and add condiments like raisins and oreo biscuits to it, to be prepared on the frozen marble slab.

Service at AB’s is warm and friendly. The waiters are always on their toes, so don’t be surprised if they show up at your table to serve the next round while you’re still gnawing on your first tangdi kabab. Four birthdays were celebrated in the span of that afternoon and each table was cheered with the same gusto.

Two hours and a full tummy later, the restaurant is still vibrant, customers are still coming in. Within three months of its opening, AB’s already has a few loyalists, and I might just be one of them.