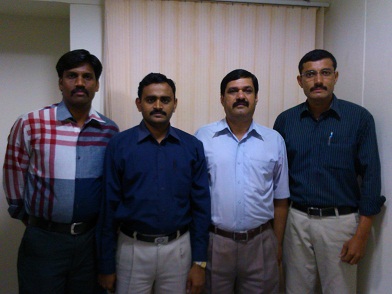 Sometime back, the Promenade Road - St Johns Road signal (previously called the Naga Theatre Signal) had malfunctioned. Explocity had posted the issue on the BTP page. They responded in about thirty minutes and the issue was resolved in about an hour.

The Bangalore Traffic Police decided to take their hitherto ‘feet on the street’ presence to Facebook. More than 71,000 'likes' later, the page is where 'netizens' voice their concerns and grievances.

We set about hunting for the people who manage the page, and how they took action.

There are nearly 10 million commuters using almost 5 million vehicles in Bangalore. To keep them all in line, there are just 2500 traffic policemen.

It goes without saying that manning every traffic signal and main road is a difficult task. In a move to effectively use technology and involve more citizens in the upkeep of the city’s traffic, the Bangalore Traffic Police decided to use Facebook to connect with citizens and understand their grievances on an open forum.

The BTP's Facebook page is managed by a team of 4.

Q: Why Facebook ?
A: The objective is to have a meaningful dialogue with citizens, spread awareness, remove misconceptions and involve community in the task of improving road user behaviour. BTP manages 4.7 million vehicles and 9.6 million commuters with the help of 2500 policemen and officers and effective use of technology. The real challenge is managing mutually contradictory views and expectations of various segments of road users and stake holders.

Q: You have more than 71,000 likes. Have you used any Facebook advertising to grow to such numbers?
A: No, we did not use any advertising. It has been organic.

Q: How many complaints do you receive in a day?
A: We receive approximately 250 posts per day. These include complaints, appreciation and general posts.

Q:. You recently started a feature wherein people could get SMS alerts of the traffic situation in Bangalore. How many requests for the service have you received this far?
A: The new feature has 5580 subscribers.

There are yea and nay sayers for every enterprise, however effective or bad. We spoke to a number of people who had posted their problems on the Traffic Police's FB page and here are some of their responses.

Vijay K, a freelance consultant said, "The Bangalore Traffic Police's FB effort is a PR exercise (not entirely without value for citizens because you can at least let off steam there and psychologically benefit) to make them 'appear' citizen oriented. But I don't expect it to fix anything because these organisations are not designed, oriented or interested in listening to ordinary citizens. They are set up to be answerable only to their own management chain."

Rajesh Aiyappa Manavattira, a chartered accountant working in a multi-national computer hardware and peripherals manufacturing company said, "FB has given BTP the much needed ‘connect’ with the citizens, which is very good. Though the ground realities remain largely the same, this page helps citizens to some extent. Citizens can raise a concern that at least gets some feedback."

Is it mainly a PR exercise, we asked Manavattira. "If it is a sensitive or a sensational issue posted, action could be faster. Others might receive the same cold response from the jurisdictional officers unless the page is monitored by top officials. I like the page maintained by BESCOM's MD Manivannan. He himself maintains it and is very responsive and his intention is undoubtedly to help citizens. I hope the BTP FB page will also be maintained and monitored by a top cop directly (if not done already) so that the results will be seen sooner than later."

Terrence Joshua, who works for a multi-national retail company said, "Facebook is a necessity for brands. Government departments find it to be a good forum to show that they take the general public seriously. Of course, I wouldn’t say that the intention isn’t good, but then good intentions alone don’t cause social change. There has to be action. Until that happens, it’s just a PR exercise."

Sometime back, the Promenade Road – St Johns Road signal (previously called the Naga Theatre Signal) had malfunctioned. Explocity had posted the issue on the BTP page. They responded in about thirty minutes and the issue was resolved in about an hour.

We asked the general public, how responsive they believed the BTP’s FB page really is.

Diwagar Vythilingam, a software engineer said, "I have raised quiet a few queries. Few are solved, while few aren't. They respond to few, yet they won’t fix the problem."

While Shyam Swaraj, a social media consultant said, "I haven’t posted on their page yet, but have closely observed how they function. They respond quickly. But it’s hard to measure how prompt they are in terms of action taken."

Social Media is a powerful medium and the most outstanding factor of it is that it’s out in the open, for the world to see. Moving on to Facebook is a commendable move by the Bangalore Traffic Police department. Their responses are prompt in terms of time. But it will take a deeper understanding of the platform and a collective effort from the team that manages the page and the on-ground officials to make it count and make a difference to the traffic scenario in the city.

Not to mention the 5 million people behind the wheels of the vehicles they use every day. Most of the responsibility for the safety and ease-of-passage rests with us Bangaloreans.