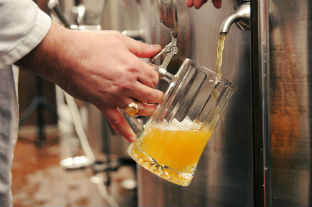 With one microbrewery after another opening up, Bangalore is definitely the beer capital of the country. Here’s our round up of the city’s finest microbreweries.

The Biere Club
The city’s first microbrewery, The Biere Club calls itself a craft brewery that produces quality brews in small batches. They have six types of brews of which there are nine ales, seven lagers, three stouts, three wheat, five seasonal and eight club specials. The seasonal brews, which are either ales or lagers, are their signature creations and include fruit beers like mango as well as spice flavours like lemongrass-ginger.
Beer to try: Mango Ale

Toit
Toit seems to be the new favourite hang-out these days. And it’s easy to guess why. Offering six different types of beer as well as a specials list, which come bearing interesting flavours as well as names, this place is always buzzing with beer lovers young and old. While Dark Knight and Tintin Toit are among the regulars, some of the seasonal brews include Pataka ale, Santa ale and the Arnie SchwarzenLager. Paired with their wood oven pizzas, these beers are sure to make anyone say, “I’ll be back.”
Beer to try: Basmati Blonde

Arbor Brewing Company
ABC is India’s first American craft brewing company. They landed in the city in 2012 bringing with them a vast beer menu from their parent company in Michigan, USA. Apart from their trademark American brews, they also have a few that ring closer to home. Their signature Sacred Cow IPA has been renamed Raging Elephant IPA for the Indian market and they also have a wheat beer called Bangalore Bliss.
Beer to try: Raging Elephant IPA

Barleyz
A rooftop beer garden is what Barleyz is. They are also a café, contemporary restaurant and fine dining venue. But it is the rooftop allure that draws Bangalore’s crowds to this brew house’s offering. The beer menu at Barleyz has six brews – American Blonde, Belgian Wit, German Wheat, English Pale Ale, Irish Stout and Barleyz Special.
Beer to try: Barleyz Special

Prost
Prost (which means cheers in German) starting brewing its own beer only since August of this year. They have six brews including the Bangalore Bolt, a wheat beer and Burnt Stone, a coffee stout. Although they call themselves a microbrewery, unlike their competition they are yet to be synonymous with freshly brewed beers. We look forward to more brews from them. Till then, Prost!
Beer to try: Amber Ale

Vapour
After Gurgaon, Vapour recently opened its doors to our city. Their microbrewery offers five varieties of brews – basmati, premium, dark, wheat and brew – as well as beer cocktails like Hangman’s Blood (lager beer with cream de cassis and black grape juice). With a small selection of cigars on the menu, Vapour really sets itself apart from the other breweries in town.
Beer to try: Vapour’s Kula Beer Cocktail

Euphoria (U4IA)
The newest addition to Bangalore’s list of microbreweries, Euphoria or as they like to call themselves U4IA, opened only last week. Although the restaurant is operational, their self-brewed beer is yet to start gushing out of the taps. U4IA will serve four types of brews – lager, captain wheat, cold stout and Octoberfest.