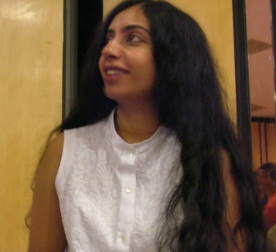 Christina Daniels is the author of 'Ginger Lemon Soda Pop,' a novella, and recently, 'I'll Do It My Way,' a filmography on actor-producer-director Aamir Khan. Working as a corporate communicator, she believes writing keeps her going. She is currently working on a book , dedicated to Bangalore’s past, present and future.

Having spent her childhood in the Cantonment side of the city, Daniels studied in Bishop Cottons and later, Jyoti Nivas College. She says, "If there are two Bangalorean identities that I most identify with, it’s Bangalore's Cantonment heritage and being a JNCite."

Quite predictably, like most Bangaloreans who love the arts, Koshy's has always been a favourite hangout for her.

She tells us, "I am not sure why writing happened. But, I do know that, even as a child, while other kids aspired to be doctors and astronauts, I always wanted to be a writer."

Daniels goes on to say, “I don't think too much about writing as profession today. I guess it just comes very naturally and unconsciously to me, like breathing. It's an integral part of who I am.”

Since she works, full time, for a corporate firm, we wondered how she found the time to write. She explains, "It's tough. But, if you really love something and if you are passionate about it, you always find a way. I do a lot of my writing and research after working hours. I normally stay up late and write."

Daniels' I'll Do It My Way roped in a lot of publicity. Therefore, this became the bigger topic of discussion.

Firstly, why Aamir Khan?
Aamir’s work continuously pushes boundaries. He is always doing something different in his films. It adds a new dimension to Indian cinema.
Lagaan definitely changed the way we produce films. If we look at other films, like Taare Zameen Par and Three Idiots, he brought out subjects like dyslexia and the educational system and got them into national debate. That was the reason of interest.

Of course, the next obvious question would be – did you get to meet Aamir Khan?
I tried getting to him but did not actually get the opportunity to interview him directly. There were two ways that I worked on this book. I did a lot of research and scanned through a lot of archives and other articles on him. I watched all his movies, beginning to end.

The other significant part of it was, I interviewed the producers, directors and co-stars who had worked with him.

What problems did you face while getting the book published and out in the market?
First, lets get the perspective of the book right. It looks at Aamir Khan through his work, the people who worked with him and the purpose of him films.
One problem was that, I didn’t get to meet him. Yet, I didn’t face any opposition from him. However, his management weren’t very co-operative while I was doing my research for the book. If he had wanted to, he could have just stopped and taken a look at it.

Considering that you didn’t get a first-hand account from Aamir Khan, how accurate are your facts in ‘I’ll Do It My Way?’
Good question. But I am certain that what I had is accurate. He has given extensive interviews in the past on his films. So, I didn’t just pick up a random interview. I would make it a point that I would find a similar tangent in at least three to four interviews.

Let’s go back a bit. How did Ginger Lemon Soda Pop come about?
Most writers return to their earliest and most powerful experiences. I wrote the book when I was 29. But, the idea was planted in my mind when I was 19. This was when I wrote first chapter. However, I felt I didn’t have sufficient grasp of my craft to write novels. So, I left the idea to pickle.
Since the characters and the background were ready, I knew that in the course of another few years, I had to complete the novel. It is a work of fiction but the landscape is real.

Considering it was your first novel, what was the purpose behind it?
Ginger Lemon Soda Pop book takes you through the ups and downs of a five-year-old girl’s second year in kindergarten. It is a universal story of love, hate and loneliness, with a sense of fun and empathy. It takes you back to living your childhood all over again.

What is the motive behind your current project?
I am currently working on a book on Bangalore. It started out with the idea of writing about the cantonment area. But now, it’s going to capture the whole of Bangalore. There are going to be two parts to it.

One is a strong documentation of photographs of Bangalore, and the other, interviews with people. So what the book will actually look at is, Bangalore – yesterday, today and tomorrow.

Bangalore has gone through many changes over the decade. How will you capture the city that was, and the city that is?
I think, as a city, we lost a lot of things but at the same time, we’ve gained a lot too. Talking about what we’ve lost, Bangalore in the 70s and 80s had a very idealistic pace of life. It was a small town, everybody knew everybody. It was very laid back, peaceful, so much greener. It looked very beautiful. The pace of life was gentle, there was elegance and charm and grace. These are the things that are gone. It has not disappeared completely but it has reduced to a large extent.

I will try to capture the essence of Bangalore of the past, and of the present, through emblematic photographs and the interviews with people who have known and loved Bangalore all their lives.