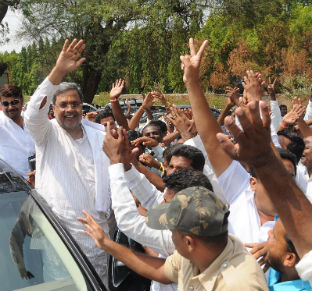 A delayed underpass, potholes, a stinking lake and slow progress of the metro, were some of the visual delights Chief Minister Siddaramaiah saw during his inspection of infrastructure projects in the city on Saturday.

The chief minister announced that a flyover would be constructed at Shivananda Circle to ensure smooth movement of vehicles. The proposed flyover is expected to cost Rs25-crore. “I hope the BBMP floats the tender for the work as soon as possible. I think the mayor should also take the initiative to complete the work as early as possible without bothering about the political affiliations. We have to work to provide better infrastructure, irrespective of our political affiliations,’’ the chief minister said.

It is hard to escape the city’s potholes; and Mysore Road, one of the roads the CM would take during his inspection, was witness to a miracle on Friday night.

The road, known for its bone-rattling ride, thanks to its potholes, was visited by BBMP authorities, who worked overtime to fill up majority of potholes. But the chief minister was not happy with the quality of work.

“The BBMP authorities have to take up pothole filling work much before the onset of monsoon. They should not shift the blame on rain for their inability to fill up the potholes. There are incidents where two-wheeler riders have met with accidents due to potholes on the roads,’’ the chief minister said.

The chief minister advised Pradeep Singh Kharola, managing director of Bangalore Metro Rail Corporation Limited, to take measures to expedite the ongoing Metro work. He has also asked whether the BMRCL has made a provision for parking vehicles at Rajajinagar Metro station. “There is a general notion among the public that Metro work is progressing at a snail’s pace. You have to speed up the construction work. I hope you will do it,’’ he said.