Home | BWSSB | Getting Ready To Zoom 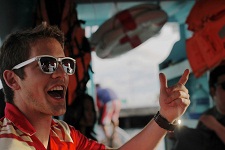 27-year old American Greg Moran was in the thick of an MBA at the University of Southern California’s Marshall School of Business when he hit upon an idea. A ‘Self-Drive Car service.’ He took a break from his studies, raised  funding and headed to Bangalore to launch ZoomCar. The number of locations you can pick up a ZoomCar is growing. He hopes to have thirty locations by the end of the year.

Greg Moran and his partner David Back conceptualised India's first membership-based, self-drive car hire service in 2011. It took them a while to get things, well, zooming, but the full-service was launched in Bangalore, in February 2013. Zoom has raised nearly half a million in funding (including $30,000 from the former US Treasury Secretary Lawrence Summers).

However, the drawback presently is that cars can be picked up and dropped off only at Zoom’s station points in Malleswaram and JP Nagar. Moran and his team hope to make vehicles available within a short walk of their members’ home or office, but that is likely to take some time. Three more locations (including central Bangalore) are scheduled to be added next month and they are targeting thirty locations by the end of this year.

Explocity speaks to Moran, co-founder and CEO of Zoom who is 27, loves Mexican and Japanese food and doesn’t rule out the possibilities of an Indian wife, as long as she likes beer.

What made you take a break from your MBA?
I took a break from my MBA because of the enormous opportunity that Zoom presented. The market was so incredibly underserved that we simply were floored that someone hadn't yet attempted this business model. My co-founder David (Back) and I began working on the idea of Zoom in early 2011 and it gradually evolved into a business by the Spring of 2012. We raised our first outside funding in July 2012. At that point, I made my decision to forego my second year of business school and move to Bangalore to formally launch Zoom.

Why India?
India has an unbelievably dynamic population. However, the country has always struggled with infrastructure, largely because of inefficient governance. We wanted to introduce a business model that could have a large-scale impact on urban infrastructure with minimal government involvement. Zoom is predicated on the successful Western model of car-sharing. We decided to launch in India largely because no other company had attempted the business in India. Moreover, India's urbanization is occurring at breakneck pace as it is slated to have 62 cities of over 1M people by 2020. Also, urban density is 7-10 times higher in major Indian cities as compared to the largest US cities. Our business model has proven to be the most profitable in the densest cities. The correlation is extremely strong.

Why did you choose Bangalore over other Indian cities?
There are a number of reasons here, but the top reasons were the strong education base, the tech savvy early adopter tenancies, relative young population, general urban development patterns, and work hub from people across India. Bangalore is the third largest city in India and it's growing at a faster rate than Mumbai or Delhi. Given the tremendous traffic and general gridlock the city faces every day, the 2 wheeler is a significantly more popular means of personal transportation. This low level of car ownership in Bangalore really drove us to launch the service there.

Do you plan to complete your MBA?
At this point, we're into our 5th month of operation at Zoom. I have no plans on leaving India and I certainly don't intend to return to business school. I do miss authentic Mexican and Japanese food though. It still hasn't come to Bangalore unfortunately.

Why did you plan to set-up Zoom?
The true triple bottom line nature of the business was extremely intriguing for us. We wanted to make a large social and environmental impact in India while also operating a for profit business. We thought that Zoom was one of the most potentially disruptive business models that hadn't yet been deployed anywhere in India.

How successful has Zoom been according to you?
Zoom has eclipsed even our wildest expectations. We have been sold out in the16 weeks since launch. We typically average between 70-75% fleet-wide utilization each week. We have over 1,700 members and over 400 reservations. Our fleet has more than tripled in size from the time of launch in February. At present, we are growing over 100% month on month in terms of revenue. We plan to double our fleet size in the next 4-6 weeks so that we can better keep pace with demand. We expect to do in excess of 20 lakh in the next month alone.

You have a degree in International Relations. How has that helped business associations, interacting with people in Bangalore, etc.?
During my IR studies, I did take a number of courses on Indian politics and economics. While this hasn't necessarily been directly applicable, it has helped offer up a perspective and a critical framework for thinking about India. Prior to Zoom, I worked in Cleantech Finance where I had exposure to energy transactions in India. This definitely helped more than just having a degree in IR. My degree itself hasn't necessarily helped with business associations or specific interactions in Bangalore. Most of the stellar personal connections in Bangalore have come from friends from undergrad or from USC.

How important is sustainable development?
Sustainable development is absolutely critical for Zoom. Intelligent urban planning can really help our business flourish as we expand across multiple cities. Our business helps take vehicles off the road (10-14 vehicles) so that there is a net reduction in CO2 and other harmful greenhouse gases. Having the government on our side is also quite helpful in terms of siting vehicles close to Zoom member demand. This local partnership will help Zoom site vehicles even closer together so that we could maximize the efficiency of our fleet. Also, we will be adding electric vehicles to our fleet later this year. These will be 100% zero emission and will provide our members a totally closed loop personal transport solution (first in India).

What future plans do you have?
Our goal is to have 300 cars in Bangalore by the end of calendar year 2013. We would have 25-30 vehicle sites across the city to accommodate this total number of vehicles. From there, we would look to expand into Delhi and Mumbai in early 2014. Our longer term goal is to hit 20+ cities in 3 years. Personally, Zoom has totally consumed my life for the past two years. My medium term personal goal is to get Zoom to the point where I can take off one day per week to focus on music, sports, and cooking.