Home | Bangalore In Pictures | "It's Commercial, But We Like The Love": Bangalore Speaks 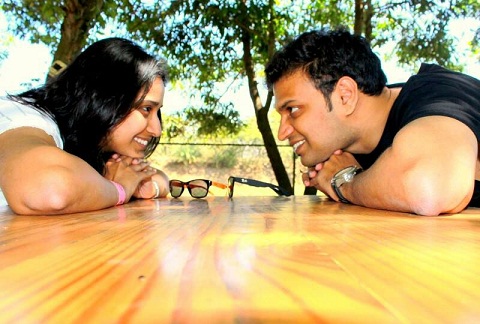 It's Valentine's Day. The day that is globally celebrated as the day of love,
for love and for those in love.

Explocity asked a number of Bangaloreans - what they felt about the day and how they plan to spend it.

Swati Dikshit Adke, a financial analyst loves the month of February because it was in this month two years ago, that she first met her husband Nikhil Adke, a SAP treasury consultant. When asked what the day to her, she said, "It's very special to me. Such days give you an opportunity to make each other feel loved and cared for." The Adkes have celebrated only one Valentine's Day together so far, when "I baked a cake for him and he took me out for a candle light dinner."

We wondered if the day is being used for commercial gain and Dikshit Adke said, "In today's world it's a little commercialised. Retailers and restaurants try to cash in on this day. But then when you're leading a busy life like today's, you need a day like this."

"Do you believe that you need a special or specific day to express your love?", we asked. She emphatically agrees and says, "Expressing love can be done in several ways. But this day lets your partner know that you feel truly blessed to have them."

Anita Dhar, a Program Manager believes that while the day itself is special, it's being used for commercial gains. She also says that while just a day is not enough to express love for someone, since Valentine's Day has been named as the day to celebrate love, "we should make it special!" Dhar says that rather than flowers, chocolates or jewellery, she would rather spend the whole day with her Husband, Conian Dhar, who works as a Training Manager. Dhar's favourite Valentine's Day memory was her husband (back then her suitor) dressed in a suit, red tie with a bouquet of flowers asking her Dad if he could take her out for lunch, only to be told that he could, if her younger sister could accompany them!

Vivek Bharadwaj, a wedding planner and his fiancee, Surbhi Mohta (also a wedding planner) have been together for six years and plan to get married soon. About Valentine's Day, Bharadwaj says, "You should be making your loved one feel special everyday, but Valentine's Day is when you should do something out of the ordinary." Bharadwaj advices that going for a long, romantic drive and giving a couple of surprise gifts is imperative on Valentine's Day. His favourite memory of the day is his fiancee flying down from Mumbai just to see him and then flying back because of her busy work schedule.

Flowers and poetry is what does it for Educational Therapist Sohamjita Roy. She met her husband Rajnish Tiwari at a mall and it has been almost six years since they got together. Roy doesn't think a particular day is required to express your love, but doesn't mind being pampered and getting gifts on any day that is important for her. As for celebrating the day, Roy says that they would like to go for a quiet, romantic dinner and play her husband's favourite game - ludo!

There will be order in the court of love for Bishwajeet Bhattacharya, who works as the relationship officer of Greenwood High. His wife Deboshree Nath Bhattacharya is a Lawyer. Married a few months back, this is their
first Valentine's Day and they plan to spend it together, probably in a resort.

Necin Lazar, works as a marketing manager. Her husband Anish Varghese works as a manager at the Deustche Investment bank. They have been married for just five months. Lazar believes that love cannot be defined in date and time. She feels that off late, Valentine's Day is mainly being used for commercial gains and that a lot of people don't even know what the day stands for. Her idea of a perfect Valentine's Day gift is flowers and would prefer just a quiet dinner with her husband.

Pooja Rajpal is a marketing communications professional who married Kamlesh Kasala, a Financial Risk Professional, three years ago. Rajpal believes that celebrating any occassion depends on the individual. She says that while there are cynics and profiteers, there also are people who just enjoy the day for what it is and what it stands for, ignoring history or gimmicks. She prefers spending Valentine's Day with her family and close friends and doesn't care for the compulsion to give gifts.

Siddharth Sharma a software engineer and his girlfriend Pooja Kapoor (also a software engineer) have been together for over four years. Sharma believes that Valentine's Day is a special day which needs to be dedicated to a relationship. Having said that, Sharma insists that one needs to express your love and care every single day and not just on one particular day in a year. As for ways of celebrating the day, Sharma says that he and his girlfriend don't have anything specific in mind, as long as they are together. On his first Valentine's Day, Sharma remembers ordering all his juniors in college to gather as many flowers as they could, so that he could deliver them all (in disguise of a delivery boy) to his girlfriend.

Wondering what all of this is about? Sohamjita Roy summed it by quoting Dr
Seuss saying, "I was a little weird and life was a little weird, and then I found
someone whose weirdness was compatible with mine. I teamed up with him and fell in mutual weirdness and called it love!"