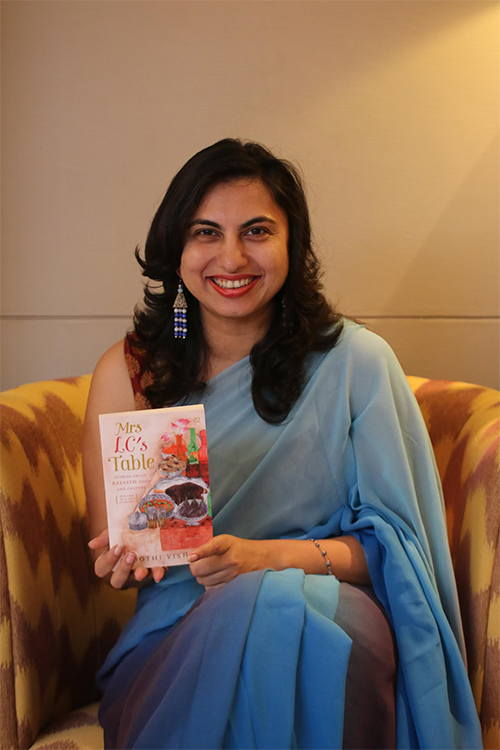 In the mixed pot of cultures that India is, there is one community that has evolved and amalgamated itself with changing times, more prominently since the Mughal era. While folklore has a vast collection of stories on the origin of the Kayasth community, food writer Anoothi Vishal walks back in time, taking us down the foodie lane through her book Mrs. LC’s Table, as she tries to trace the Kayasth grace of cultural amalgamation.

Mrs. LC’s Table is seeped in emotion and nostalgia.
I began the book because I wanted to write on food history and food in a larger cultural context. The Kayasth culture of amalgamation – this ganga-jamuni way of life and food as its centerpiece – has always been close to me. There is nothing like ‘cultural purity’ or exclusivity, and this is what I wanted to highlight through the story of this community. The world of my grandparents overflowed with culinary inventiveness that adorned their dining tables. This was the best journey to take the reader through with kaliya and poori, shayari and Hindustani classical music that ruled their feudal, bureaucratic times.
I have always been an insider and outsider. I’ve brought a similar layering in my social commentary on Kayasth culture layering it with food history and a personal narrative.

What is the key ingredient that brings the sensuous apprehension of food and it’s emotional meaning together?
Food is a sensory experience. It is also invariably about memory. While cooking, you try to recreate a particular flavour from the past where the taste is in your head first and translates to reality. Similarly, eating shouldn’t just engage your senses but should also engage the mind and evoke feelings. The worst food is consumed mindlessly. The best evokes all sorts of things within you.

Do you believe cuisines are always in a stage of metamorphosis?
Food is always evolving. The pulao became the biryani, and biryani is now biryani arancini or biryani sushi or perhaps deconstructed biryani in restaurants! But the globalisation of the palate means that we are losing finer nuances – things like seasonality, specific subtle spicing and yes the more complex home dishes to things that are bunged in together, flashy or just have that sweet-sour-hot chatpata flavour profile meant for instant gratification.

Which other culinary spread that excites your palate?
I like Japanese, Thai and other Asian foods. Also anything with coconut, mustard and curry leaves.