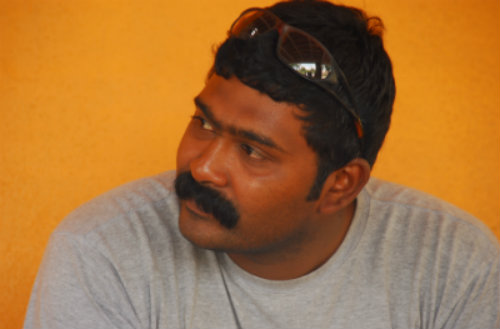 “Creativity inspires me. I deal with different things everyday since the onset of Travellers Meet. I get a lot of joy out of it. The whole idea of putting together 200 people and just share their stories, that’s what I do. The energy that comes out of it is what I live for.”

“I have lived a traveler’s life, and I want to relive the experience every single day,” says Santosh Kumar, who organizes something called ‘Travellers Meet’ a monthly event at Jaaga on KH Road in Lal Bagh, where fellow travelers meet and share their travel experiences.

After finishing high school at Baldwin Boy’s, Kumar decided he didn’t want to study any more. Not formally, anyway. He followed his calling, which came from the outdoors.
“I trained myself. I trained myself to work through forests. I trained myself into becoming a river guide, one of them being the River Kali at Dandeli, Karnataka. Eventually, this led to a point where I was organizing trips for other people.”

For a while, Kumar stuck to his calling, taking people on adventure trips. But a rafting injury to the knee brought this to a complete stop.

“While I was recovering from my injury, I decided to set up a store primarily to market equipment for outdoor use, it Indiranagar.” Soon, Kumar was suggesting adventure holidays, camping trips, hiking holidays and other exciting outings to the people who would come his store. Bonds were formed.

“This interest started growing. I decided to make something out of it. A platform, where people could meet up, hang out, talk and share their travelling experiences. From a store to a website, now to a monthly event, things just evolved,” says Kumar happily.

In July 2010, Get Off Traveller held what they hoped would become an annual two-day event. Speakers from around the country were flown in to talk about travelling. To share ideas on regular outdoor activities. The meet was a paid event and didn’t have any sponsors.

“Unfortunately, lack of resources in 2012 put things on hold,” says Kumar.
This was when Kumar discovered Jaaga. “They offered their venue to organize the meets for free (initially). Now, we pay Jaaga between six and eight thousand rupees for the venue. We get speakers from around Bangalore to share their experiences and knowledge about travelling. We’ve also had people from other cities flying in to share their travelling experiences. This costs us about twenty to twenty-five thousand rupees, just to fly in speakers from other cities,” he says candidly.

“I’m a traveller. Hanging around Bangalore, after spending a month on the road, just wasn’t exciting. The energy one feels while one is on the road is something I crave. So, one night, I was with a couple of friends in a pub, and we decided to organise a meet for all travellers – experienced and inexperienced – to share, inspire and help other aspiring travellers. This gave root to what is now Travellers Meet. This began in June, 2012. What started as an annual meet, has now turned into a monthly event. We’ve just completed our twelfth meet this June.”

He is enthusiastic about his fellow travellers, “We share experiences and stories. In a word, we connect. We want to inspire people to travel. We have had a group of religious followers. We are evolving. We’re not even a business,” says Kumar.

Kumar says that Travellers Meet will be experimenting with different things by having contests for writers and may even introduce travel journals. Kumar says this will take some time. As for the future of Travellers Meet, Kumar wants to see it branching out into different cities.

Travellers Meet is currently on its way to having a meet for all serious motorcycle travellers and adventure motorcyclists. This will be happening on July 27 and 28.

Take A Trip to The Amazon Rainforest

Marking twelve consecutive ‘Traveller’s Meets’ Kumar invited – Paul Rosolie, naturalist and author – to come and share his journey with Bangaloreans and others.

Six years ago, Paul Rosolie travelled to the Amazon Rainforest, Peru, as a volunteer. In the process, he found his way to creating partnerships, and eventually friendships with local Peruvian guides. After successfully nabbing poachers in the Amazon along with the Peruvian police, Paul decided to organize a group which he called ‘The Tamandua Expeditions to the Amazon Rainforest.’

It is a twice a year expedition that aims at promoting eco-tourism, but in a hands-on way. No life jackets, no electricity, walks in swamps and catching snakes. It isn’t your typical touristy trip and definitely not for the faint-hearted.

“People, all over the world, need to stop being afraid of snakes and so-called wild animals. These animals are afraid of us. We are destroying their homes. We want people to know that they are not dangerous, instead we are putting their lives in danger,” says Rosolie.

Three years ago, Bangalore girl Gowri Varanashi signed up for the expedition. Now, Rosolie and Varanashi, married, are running the expeditions together.

Explocity met up with the couple during the June edition of Travellers Meet to find out what made them tick.

“We try to get people from all over the world to go with us on these trips. We need a minimum of five people for a single expedition, for two weeks. This is a true adventure.”

By employing local guides and local people to cook and provide hospitality, the expeditions involve both exploration and research through the Amazon rainforest, with relaxing breaks in between.

“Not having a sponsor currently, the money for these trips comes from volunteers ($1500 excluding flights). The volunteers have to organize their own flights to Cusco, Peru. We meet up in Cusco. We then proceed onwards to Madre de Dios, via boat for a day and a half. Our research centre is based in Madre de Dios, a small jungle town. We’ve had some positive responses from India. We spread our news three to four months ahead of time before a planned expedition on their website and Facebook page,” says the intrepid Gowry.