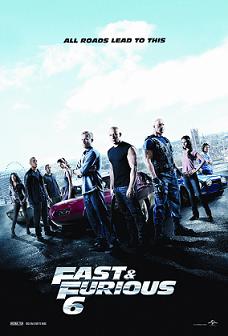 At one point during this film, Brian O’ Conner (Paul Walker) says, “This time it’s not cops, it’s not drug dealers, this is different, it’s a whole other level.” Fast and Furious 6 is exactly that. The makers, fresh from the success of the 5th installment of this hugely popular series, have indeed knocked it up a notch. Fast 6 is an explosive film which provides edge of the seat entertainment keeping its emotional quotient intact.

This time around Dom (Vin Diesel), Brian and their team join forces with special agent Hobbs (Dwayne Johnson) to bring down an international mercenary - Shaw (Luke Evans) who specialises in vehicular warfare. The previous film, ended with our heroes pulling a fantastic heist in Rio and getting away to settle down on beachfront properties. But that’s never going to be enough for the adrenaline loving speed junkies, right? Opportunity knocks in the form of Hobbs telling Dom that Letty (Michelle Rodriguez), Dom’s ex-girlfriend presumed dead, is alive and part of Shaw’s gang.

What follows are some really awesome chase sequences, lots of beautiful fast cars getting destroyed and some monumental stunt sequences.

There are two awesomely executed sequences in the film that really stand out. One involves gravity defying action over a bridge with a tank (that’s right). Cars here are used as a carpenter’s tools. The climax sequence is clearly one of the most elaborate and ambitious stunt piece put together for an action film in recent time. It’s a plane take off-in-progress scene with cars attached to it; about 5-6 fights happening simultaneously across the setup, people getting on and off board and all this while the poor pilots are trying their best to get off ground. If not handled the way it was, this whole scene could have resulted in a colossal (and expensive) mess. Kudos to director Justin Lin for brilliantly managing a stunt piece of such magnitude with so much flair.

The cast is in top shape giving another knockout performance for a film-franchise they’re all most identified with. The ever-witty and hilarious, Tyrese Gibson and Ludacris (with some admirable contribution from Dwayne ‘The Rock’ Johnson this time as well) are simply superb. The chemistry between the actors is natural and that translates like a smooth revving engine on screen.