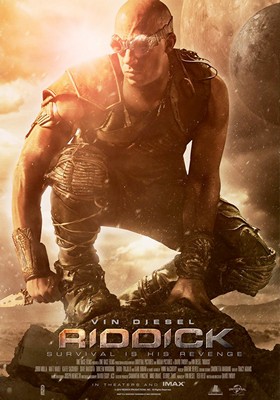 Riddick, the latest chapter of the groundbreaking saga that began with 2000's hit sci-fi film Pitch Black and 2004's The Chronicles of Riddick reunites writer/director David Twohy and Vin Diesel.

After nearly a decade, Diesel reprises his role as the antihero returns and cult favourite, Riddick, a convict with the ability to see in the dark.

Riddick is a dangerous, escaped convict wanted by every bounty hunter in the known galaxy. Left for dead on a sun-scorched planet, Riddick finds himself up against an alien race of predators. Activating an emergency beacon alerts two ships: one carrying a new breed of mercenary, the other captained by a man from Riddick's past.

Soon, however, he finds himself fighting for survival against alien predators more lethal than any human he's encountered. The only way off is for Riddick to activate an emergency beacon and alert mercenaries who rapidly descend to the planet in search of their bounty. With time running out and a storm on the horizon that no one could survive, his hunters won't leave the planet without Riddick's head as their trophy.

Understanding what had to happen for this movie to be produced, the film nails it. Diesel placed his very home on the line to help fund the movie. That probably explains why it isn’t as big, or filming in as many different locations as past movies. However, the team pulled it off. It’s fun, action packed with no over-the-top sequences, along with a different feel.

The critics seem to have called it wrong with this one. Of all the summer action blockbuster letdowns, this was the only movie to deliver, despite the low expectations.

It’s a thrill ride from the start that just doesn't quit. Diesel is truly at his best as Riddick.

With his subtly intimidating performance at the film's centre and a provocatively structured narrative, Riddick ultimately fulfils itself as a thrilling action flick with some entertaining sci-fi elements in tow.

This writer can only look forward to the sequels to follow.