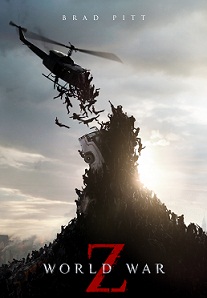 Hollywood seems obsessed with society in a state of dystopia, zombies and 3D. World War Z just conforms to that. It’s good cinema, but there’s no freshness really. Of course, with the zombie genre been done to death, it’s hard to expect freshness, but Will Smith achieved that with I Am Legend. There were complexities, there were moments where you sensed impending doom and you empathised with Smith’s character. World War Z on the other hand, doesn’t establish that connect.

An adaptation of Max Brooks’ 2006 novel of the same name, World War Z is directed by Marc Forster (Quantum of Solace) and tells the story of former United Nations’ employee Gerry Lane (Brad Pitt) who, after defending his family from a zombie outbreak, uses his UN connections to whisk them away to an American Navy ship. To ensure his family’s safety (and for the greater good of mankind) Lane has to accompany a special team to identify the cause and hopefully cure the outbreak. Lane travels to South Korea, Israel and the United Kingdom. He figures out that the virus causing the zombie outbreak requires a healthy host to thrive and camouflaging the uninfected with a disease would make them almost invisible to the hungry zombies.

Pitt breezes through a very straight forward role. There are no layers. He does what is expected of him and he does it well. The rest of the cast (Mireille Enos and Daniella Kertesz) are just glorified extras.

Most of the zombies are created in CGI and look fierce and quite real. However, they are quick on their feet and can jump great distances – something not seen before in the genre. Perhaps that was the only new thing that Forster and the screenplay writers could think of. Another downside of the film is that it is mostly dark (in terms of lighting) and 3D glasses are a huge hindrance.

To be fair, the film doesn’t play to the galleries. It doesn’t force fit what other blockbusters have tried. But it tries so hard to be different, it ends up being a dull affair.