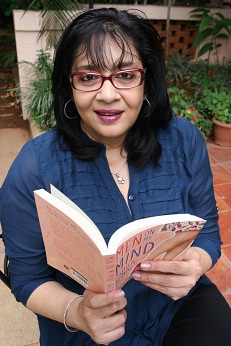 Sometimes people ask me who my role models and inspirations were musically. Of course, as a singer of jazz standards, the obvious Ella and Sarah and Anita... even Helen come to mind.

Although today I spend more time on my own material, I didn’t move up the scale, so to speak, before I’d cut my teeth, deconstructing and coaxing the beauty out of melodies that defy reason like Lush Life and Midnight Sun.
But there’s another singer, a little closer to home, who made a profound impression on me and I hadn’t really exactly realized how much until I heard of her passing this morning from Lorraine Banks, wife of the piano player Louiz Banks.

Her name was Pam. Pam Crain.

And she was India’s Ella, Sarah, Anita and Helen all rolled into one. And I write this filled with an inexplicable sorrow although she wasn’t someone I actually knew personally.

I first heard her sing even before I knew I wanted to be a singer, as a little girl when my parents lived in Calcutta. At Trincas and Blue Fox where Pam glittered.

And by the time I began my own career, I was in total awe.
She was lush, lovely, long limbed, blonde, beautiful and had a voice like an angel. She knew her standards, she knew her blues and she could scat endlessly and effortlessly, chorus after chorus, without repeating her ideas. I think that’s when it crystallized in my mind. The fact that I needed to sing.

As someone who had studied Indian classical music (I had no choice in the matter, it was the done thing in my household where Suprabhatam trounced Stella By Starlight on a daily basis) but whose heart lay somewhere between rock and roll and jazz, Pam’s mastery over turnarounds and chromatics had me spellbound. It was as if she’d found a way to unravel life’s deepest mysteries and I knew I had to either find a way to do it like she did, or find something else that would allow me to make my own mark.

When you study Indian classical music, and then try to make the transition to jazz, the problem is that you are rooted in the tonic. It’s hard to wrap your head around the changes and the shifting tonic that jazz mandates.

It’s rocket science. Really it is. Especially if you can’t read music.

Pam Crain wasn’t weighed down by any such millstone, possibly because she was Anglo Indian and the music playing in her house as she grew up was what got inside her head and stayed there through our her long career.
Recently, Susheel Kurien made a movie called ‘Finding Carlton’ which traced the history of Indian jazz, especially in Calcutta, where Pam spent most of her years singing. Sadly, there were way too few clips of Pam, but when he managed to catch her in action (old footage) it was electric. At least to me.

I don’t know if Pam made a lot of money singing jazz in India. It’s most unlikely, judging by Susheel’s movie which traces the tragic path of Carlton Kitto – a jazz guitar player who performed with Pam. In the movie, you learn that Louiz Banks left the jazz scene in Calcutta and moved to Bombay to keep body and soul together because jazz was being slowly but surely pushed out of the clubs and bars before the bars and clubs themselves got shut down. Bollywood took over.

People these days can do very well without jazz, especially in India, and I consider myself very fortunate when someone actually asks me to perform. It’s rare and it’s precious.

I am not sure when Pam stopped singing publicly, but in the past several years, there’s been no mention of her performing. Everyone gives it a rest after a while, I guess.

A couple of years ago, she ‘befriended’ me on Facebook.

I was amazed.  I had no idea she even knew who I was. It totally and completely validated me as a singer and I consider it the equivalent of a ‘Star’ on Hollywood Boulevard.

RIP Pam Crain. You were fabulous, one of a kind.

And I’ll sing a song for you when I go on stage next.