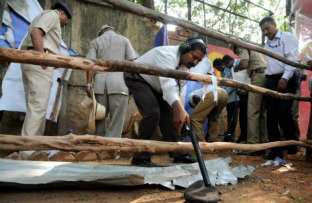 According to the city police, Yasin is the mastermind behind the Chinnaswamy Stadium blast. In fact, police were on the trail of Yasin after a huge cache of explosives, SIMs and Rs 11 lakh in cash were seized from a house at Ullal in Mangalore in October 2008. Police had arrested one Mohammed Ali, his son Javed Ali and Naushad, who was into construction business in Mangalore. In this case, both Yasin and Roshan, alias Riyaz Bhatkal, were named as main accused.

“There was specific information that the explosives for the 2007 Hyderabad blasts were transported through Karnataka. And, he was very much in the country when all these blasts, including German Bakery blasts, were executed by IM,” an official said.

After continuous efforts to catch up with Yasin, Bangalore police did taste some success in the Stadium blasts case when the Delhi police arrested two IM activists in 2011.

Sources said Yasin had a base in Tumkur through one of his old pals, Shabbir Gangoli. Police say Yasin’s interrogation will throw more light on his local connections in Tumkur, Chikmagalur and Mangalore.