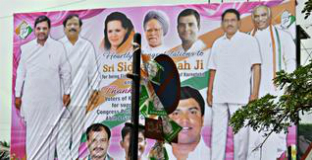 Banners and posters of politicians have defaced Bangalore’s skyline. Chief Minister Siddaramaiah, his ministers and legislators are out there, glued to walls and light poles. Members of civil society feel it's high time authorities wake up and sanitise the skyline.

NS Ramakanth, member of the Solid Waste Management Round Table, said, “There will be a birthday of some leader or the other through the year. Does that mean we should keep defacing our city?"

Pranav R, a resident of Vijayanagar, said, “Corporators seem to be competing to erect large banners to impress their political bosses and no one bothers to take permission or follow rules while doing it.” Despite strict rules already in place, this still happens. The BBMP can file police complaints against the putting up of illegal posters under the Karnataka Open Places (Prevention of Disfiguration) Act, 1981.

BBMP Assistant Commissioner (Advertisements) Jagadish BN said, "If there's a mention about anyone who have put up hoardings, we will lodge a police complaint. In other cases, we book complaints against the person showcased." After being asked as to how many cases have been booked against elected representatives, Jagadish said, “Joint Commissioners at the zonal level have been empowered to deal with such cases and our office do not have the figure.”

What the rule says

Under the Karnataka Open Places (Prevention of Disfigurement) Act, 1981, whoever by himself or through another person affixes to, or erects, inscribes or exhibits on, any place open to public view any advertisement without the written permission of the local authority having jurisdiction over such area, shall be punished with imprisonment of either description for a term which may extend to six months or fine which may extend to Rs 1,000 or both.

Picture reproduced from The Hindu