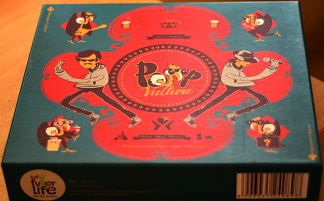 Can you list ten movies starring Rajnikanth? How about Akshay Kumar? Can you name ten things that are common to all Alien movies? Can you hum the jingle of a famous soap brand? If you can, you are totally clued in to Indian popular culture and Pop Vulture is a board game tailor-made for you. That’s right, not an App, but a board game.

Pop Vulture is a card game that is a mix of famous games like Pictionary, Taboo, Dumb Charades, Memory and Truth or Dare. Created by The Fuller Life, a company that manages internal marketing, employee engagement, health and recreational activities, it is designed to remind Indians of things that you are likely to have seen or heard on television, radio, movies, film songs and music videos, to news and current affairs.

Expect anything related to Indian popular culture from the name of Hema Malini’s horse in Sholay, to the tune of a famous detergent’s jingle. Having played a few rounds with the Pop Vulture team, one can say it’s harder than it seems but not terribly so if you have a decent memory. Pop Vulture was created by Keshav Rajendran who was working at The Fuller Life.

Rupali Prakash, Product Head of Pop Vulture explained, “Everything from movies, television, advertisements, music, things that we have seen, heard or related to while we were growing up, is a part of the game. It tests your memory and also brings a feeling of nostalgia. It’s a combination of nine different task types which are inspired by various games.”
Nissim Disliva, who also worked on the project adds, “We have also included some unique tasks to the game.”

They tested the game at various college campuses across India. Rapahel Kottakal, another team member explained their process, “We personally tried and tested several game types over a year. We finally got what we felt was the best for the game.”

"We started off with a huge list of crazy tasks,” Disilva smiled, “but had to cut it down to fifteen and finally nine for the game because a lot of tasks were too elaborate."

The obvious question of course was in this day of Apps and online gaming, why a board game?

Disilva replied, "The idea behind the game was nostalgia. It’s a ‘box’ full of ideas and concepts that people have grown up with. Launching it straightaway as an App would have taken that feeling away." Prakash added, "Most games are created for kids, very few for grown-ups. This is the kind of game you can play with your entire family or gang of friends."

While the game has been conceptualised in-house, the design, development, production and packaging have been outsourced. "Our forte is ideation and creating the content and so we prefer to leave the development to professionals outside. We would like to see how things go and then perhaps decide on having a larger team in-house," explained Naveen Chhabria, another team member.

The game was launched in November 2012 and the Pop Vulture team says it has sold around two hundred pieces and most of the sales have come from Mumbai, online. They weren't comfortable discussing costs and revenue but Kottakal explained, "Board games take some time to catch on. We expect to take some time to break even but we’re satisfied with the pace at which we're going."

The game can be bought online from www.popvulture.in and offline from The Entertainment Store on Church Street and Fancy Chilli in HSR Layout.

In the near future, the Pop Vulture team is planning to create more categories and sequences in the game. They are also planning city-centric versions. While the game is all about nostalgia, the team isn't only about that. They understand the penetration of the Internet and touchscreens and are planning a Pop Vulture App too.

Listeria: List down ten things of a topic
Finger On Your Lips: Mime a song
Sixth Sense: List down things related to a genre
Last Letter First: Eight titles that start from the same letter the previous one ended with
Mmm…: Hum a tune
Connect The Dots: Mime three words of a genre to get one answer
Colour Pencil: Draw what’s asked for
Ad The Following: Act out an advertisement
Third Degree: Ask questions to get your friends to say words on a card