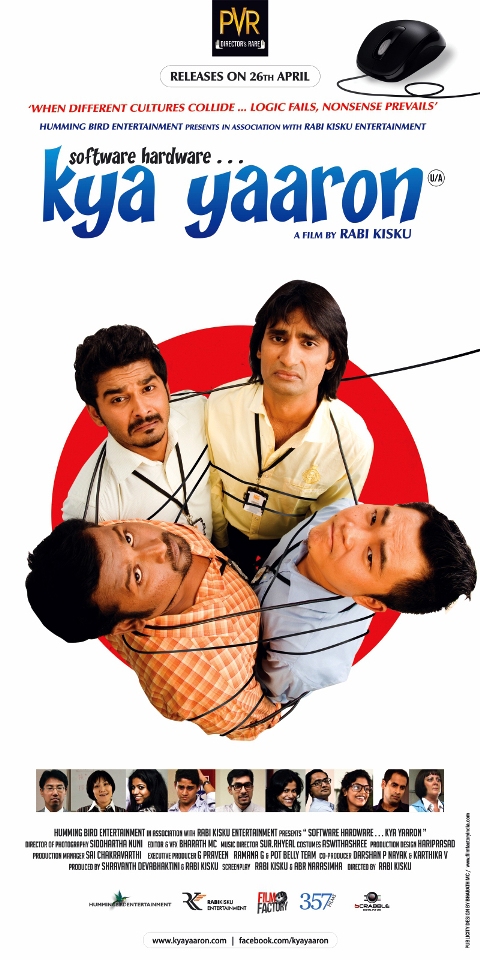 "Making an independent film in Bangalore is like searching for water in a desert."

It’s not easy to make an English independent film in Bangalore (where the film industry is predominantly regional) and then take it through to a pan-India theatrical release. All this, with no star power, no big budgets, no song and dance and no filmy flim-flam. But Bangalore based filmmaker Rabi Kisku, along with an amateur cast and crew managed to pull this off.

‘Software Hardware Kya Yaaron’ is one of the rare attempts at independent filmmaking in Bangalore where one is more likely to find short films made by weekend filmmakers. But Kisku and his team overcame financial obstacles and got their film a big screen release thanks to PVR’s Directors Cut initiative -- a true inspiration for a lot of aspiring filmmakers who feel that the only way to realise their dream is to struggle for years before landing a job as film director (a rare case in this highly competitive industry) backed by a studio.

The team of Software Hardware proves that all it really takes is passion for the craft and a vision to see the film not just in living rooms but also in theatres and on the big screen. We spoke with Rabi Kisku and got him to share his experience of pulling off such a feat.

How did you stumble upon filmmaking? What was the motivation behind it?
Filmmaking has been my childhood dream. From a very young age I was fascinated by Hollywood science fiction movies. I was completely mesmerized by the fancy visuals of futuristic worlds and characters. I was always curious about the making of a film and as my understanding of that process grew, my love for cinema turned into a passion and dream to actually create my own film.

But now things have changed for the better. Many films, shot on a shoestring budget, are coming up in Bangalore. I keep getting calls every week from people who have a made a film and want to know how to go about releasing it. Though this trend is still in the nascent stage, it’s definitely catching up. It just requires more support from the industry.

How was the experience of shooting a film like Software Hardware Kya Yaaron in Bangalore? What issues did you face?
Making an independent film in Bangalore is like searching for water in a desert. Firstly there were neither resources nor a talent pool for alternate/ parallel films. We couldn’t take people from the industry because they didn’t understand small budget films and would charge their usual rates, which didn’t really work with our budget. So I had to create a new talent pool, it was like starting a parallel industry from scratch. I have been conducting filmmaking workshops since 2008, so I was able to gather hard working, committed and dedicated people, train them and prepare them for a bigger platform.

Secondly there was no support system from the government, no guidelines or mentorship to help young filmmakers, no subsidies or discount rates for small indie (independent) films. All the studio and film equipment vendors had fixed rates. We tried to explain that this was an independent film, but they never understood it.

Thirdly, the general public was not so enthusiastic about cooperating or providing space for film shoots. Apparently the reputation of the film industry was so bad that no one was willing to really help. With much difficulty and after a lot of convincing, we managed to get permissions to use certain locations for our film.

How does the economics work here? Were you able to recover costs? How did you get funding for the film?
The economics is very tricky with indie films. There is a very small, niche market for independent films in India. If a small film has to work theatrically, it has to be backed by a very big production house or a huge amount of money needs to be spent on publicity, promotion and release. Until and unless you have that kind of money, you cannot compete with big movies and when you do spend so much money, then your movie is no longer a small film.

Indie films made in regional languages sometimes are bought by local TV channels, which then allows a small chance of recovery. But even satellite TV channels look for stars, songs and usual routine formulas in small indie films.
There is a new avenue to showcase & recover money for indie films these days and that is On-Demand Online Streaming. Lot of online portals have mushroomed in recent years where people can upload their movies and rent them out on pay per view basis to a global audience.

I raised 50% of the money through investors and the rest through crowd funding. I’m now trying to sell the movie to a TV channel and then put it up for online streaming. Maybe then, I’ll be able to recover my costs.

If one is interested in making films, how to go about it? What are the initial steps?
Firstly, they have to learn the craft. They can go to film schools, attend filmmaking workshops or work in couple of movie productions. They also need to learn the movie business and marketing aspects. Once they are confident about making films, they can approach investors/ producers or raise money through crowd funding.

You think Bangalore has a good talent resource pool in terms of actors and technicians to successfully create a feature film?
Yes, there are, but very few in numbers. There is a dearth of quality actors and technicians in Bangalore. There are a good number of amateur actors who are either college students or working professionals, juggling between their corporate jobs and theatre, but not full time actors. The really talented ones, who want to take up acting professionally, move to Mumbai, Chennai or Hyderabad for better opportunities. There is a severe shortage of high quality technicians for sure here.

How did you market the film in Bangalore? How was the response?
I released the movie twice actually. Once independently only in Bangalore last year and then all over India with the help of PVR Director’s Rare this year. Majority of the publicity was done through online and newspaper articles. Critically the response was good but commercially it wasn’t that great.