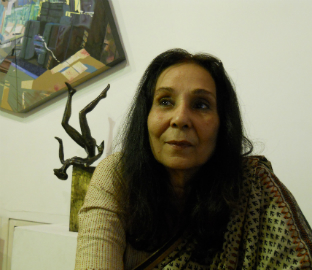 “For me, it was born out of a need to live in an aesthetic space. I knew that I loved aesthetics. I also knew that such a space, whether it was an architectural space, or a theatrical space, had the ability to touch the mind in a very beautiful way,” says Renu George.

Renu George is an artist, an art lover and curator of Time and Space Gallery, Lavelle Road.

“Considering my family background, I was a voracious reader. I was involved in the theatre scene in Miranda House and St Steven’s College, Delhi. I then came to Bangalore, where I was also part of many plays.”

In her late 20s, George suffered a severe crisis. She explains, “I was not happy. I felt, I wasn’t where I was supposed to be. This ultimately led to a break down. After which, I became sensitised to art, in a very different way. Art became very real for me.”

“I was in a nightmare for a long time, a dark space. In that dark space, the light often came from beauty. It came from truth.”

She continues, “Over the years, you meet many people who stimulate your mind. Art was something that I connected to. At a certain stage, art is perceived as a fairy tale. But, at a certain point in time, you begin to live these tales.”

It was at that point when George’s reading capacity became slightly impaired. She became sensitive to the visuals.

“I began to read and interpret the visuals, which I would see anywhere and everywhere - paintings, symbols - and how they connected. This connection became a leveller. It has always been a powerful means of communication.”

“I started my own gallery. I was initially involved with antiques. Antiques speak of the classical world, a world that has sustained certain things, yet at the same time, changes with time. Eventually, I became involved with contemporary art.”

What then, is art to Renu George? She elucidates, “Art, to me, is a sort of timeframe. You frame that piece of time, so to say. I realised that contemporary art is such a dynamic field. It is a living thing. It is something that is always changing.”

For George, art isn’t how it is expressed, but what is expressed. Art, therefore, became a choice for George. The gallery became a forum for young artists, particularly those who could be influenced and inspired.

George acquired her taste for art at an early age. She narrates, “Growing up, I don’t remember things around the house being excessively beautiful. But our home was always lovely. One must understand that there is always good taste even in the smallest things. I picked up my first piece of art around the age of 16. It was a ceramic figure. I remember that it was quite beautiful. Later, I went abroad and bought prints of Picasso and Rossetti. These aren’t your usual pretty pictures. But, something must have been evoked and inform my mind to appreciate what the artist had done.”

George explained, “The very act of giving works of art further form became a constructive process. I started with an idea of just creating space. It has been, and continues to be, a lovely experience, because when one puts up works of art, they must look beautiful, individually, as well in harmony.”

George mentioned that the gallery has gained popularity because of the media. People began to come to the gallery, and it began to have a life of its own.

Working with artists can never be a one-way road, and George has had her share of it.

“To meet and converse with artists is to enter a world that is very truthful. Often in life, particularly in a society, we only skim the surface of any subject. But, artist dive in to it. They ask and they enquire. They are courageous about how they feel. They speak the truth. Their truths are hard and painful to see. It requires from you, responses, which are uncomfortable. They are extremely compassionate and sensitive people. So, to be with artists, at the time when the gallery had started, was rejuvenating.”

Having started alone, George faced a number of glitches, monetarily. “I didn’t take a partner, because at the time when the gallery had just started, I thought my daughter would be my partner. However, she was too young.”

She continued, “So I took a leap. I never expected it to be so demanding, financially. It was taking up a lot of my time. It took over my life. Time and again, I would often ask myself if I should close the gallery. That would always lead to another question - Do I want to continue? The answer would always be - Yes.”

Time and Space essentially promotes classical art. To George, classical art connotes the classical world, that is, the unchanged world.

“It is a world that has no beginning, and no end. It is holistic; it is beautiful… it is a rewarding world. Now, man’s problems have multiplied exponentially. I mean, politically, when I say this. But, in all honesty, I have stayed away from them.”

George claims that many people politicise art, and that they do a good job at it. However, it’s another aspect of art that she does not wish to touch.

“The broad genre of work that I show has meaning across the board. Art has it’s own language, and I trust that voice that comes out of it. Sometimes I feel I haven’t done enough, to show the other sides of art. But, if I am not passionate about something, I leave it alone.”

Considering the various problems that George faced, we asked her if being a woman curator was an issue. “I’ve never had a problem with gender biases. I am not aware of these situations. I see a person as a person, and when I relate to people that way, they too relate to me in the same way. Of course, in any field, anyone would need to have definite boundaries. I was always aware of these boundaries, so, people would treat me the same way I would treat them.”

She laments that young people do not consider buying visual art. She explains, “Too few young people connect with visuals. It has a kind of aura around it that says ‘expensive and for the very few.’ That’s not true. People can always save, say, 500 a month, and but a piece of art. They go to restaurants, which cost a lot of money. I insist that they come in and take a look. There’s nothing to be embarrassed about.”

If information on art is what one needs, George says she is ready to help. “Ask for a work of a certain amount and I can help them with what I have in the gallery, or at least recommend something else within the amount. Young people are always welcome to ask questions, appreciate the works, and try to understand.”

“When we display, we show two kinds of work. One is of the young artists’, one is the highly established. Established artists come in with their own price and there’s nothing we can do about that. But, with young artists, I would suggest that they don’t put up their prices too high.” With works by young artist, it’s a good way to begin a collection.”

Time and Space also offers the option of purchasing pieces of art in instalments. “I would suggest people to start small. Patiently and surely, before you know it, one would have a collection. Come and look and fall in love with a work. Or at least, something you would want to continue to look at.”

We asked George about the gallery’s journey, she said, “Growth has been a slow process. Now, it has reached a stage where the gallery runs itself.” This allows George to have more time on her hands. She mentions she would like to go back to theatre and direct.

On asking her about the art appreciation scene in Bangalore, George says, “Art appreciation has changed compared to when I started. Now, taste has evolved. Art connoisseurs seem to have increased in number.”

We then asked George about art as an investment. She says, “The matter of selling is difficult, even with established names. You buy a work of art and ten years down the line, the work of art may or may not go up. Most of the artists I have shown have gone up from rupees ten thousand to a lakh, and more. I don’t put up prices too much. I’d rather people bought them. As long as I can keep art at an affordable price, I do.”

The uncertainty makes investing in art a shaky business. George elaborates, “For it to turn into liquid cash, takes a long while. Someone would have to like the work and so on. And if the artist is no more, that too plays a role, because works of the artist aren’t being produced anymore. And, another factor is luck. If you’re lucky, chances are, prices will go up. But I would say, buy art because you love it, not for an investment.”

She continued, “If one buys a painting because one likes it, it’s different, because the person has bought it out of appreciation for it. If one wishes to invest in art, I would recommend top ranged artists in India and tell them whether or not it’s a good investment. Risk depends on how established an artist is.”

Earlier this year, Renu George was a recipient of the Mantram Women Achievers Award. “It came as a huge surprise and I was absolutely delighted. Getting an award is always nice. It’s my first award as an art curator. To be in the company of Arundhati Nag, who has done so much, and Surupa Sen, was an honour.

“The gallery has witnessed an increase in people walking in, over the years. Collectors sustain the industry. Some walk in regularly and buy regularly. They collect because they find something very special in works I display. I have had a relationship for many years with them, for which I am very grateful.”