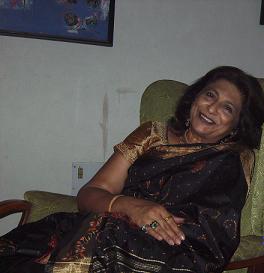 Author Sadiqa Peerbhoy wrote her hilarious book Marry Go Round in only seven days. She says she never had the time to deal with writer’s block.


Columnist, writer, creative director and one of Bangalore’s best known citizens, Sadiqa Peerbhoy, knew very early that she was destined to be a writer.
One of her earliest memories was the time she was in Class Three. “We had a cupboard which was full of story books. We were allowed to access it only during the reading period and I remember telling my teacher, ‘One day, my book will be there in that cupboard!’ You know what the great thing about this is? My teacher still remembers I had told her that so many years ago.”

Her book ‘Marry Go Round’ (Jufic Books, Rs 145) is a hilarious ride.
The story centres around a determined mother using blatant emotional blackmail to lure her NRI son into a marriage with the “right girl”, a reluctant young man with a live-in girlfriend back in Amreeka, a young girl on a rebound from a disaster of a relationship with a married man… the characters in this book are so real that you can do little but fall in love with each one of them.

And the fun doesn’t end there.

With the novel revolving around the attempts of Sartaj Begum, an antique in her own right, with a mind that can only be defined as a remnant of the old Nawabi Khandan, she is on a singular quest to find the right bride for her beloved son, a desi mussalman of high birth, one who can help carry the family name forward.

The son Riaz not only has a mind of his own, but also a live-in girlfriend back in New York. After getting to know of the existence of the girlfriend, she fakes a heart attack and forces Riaz back to India, away from the evil clutches of his white lover and of course straight into the life of Sana, a daughter of the reputable Mirza family. What follows is a hilarious account of each of the characters plotting their own arrangements to wreck or save this marriage.

Marry Go Round is Peerbhoy’s first full length novel. The amazing thing is she wrote the book in only seven days. She smiled, “Not for once did I have to step into the horrifying zone of the writer’s block.”

She described the way she wrote the book as someone would describe an out of body experience. “The way I write is something I can’t seem to explain. At times, it feels like I am just putting down the words and someone else is pouring thoughts out onto the paper. It is a feeling that I really can’t compare to anything else. I guess this is what people mean when they talk about being in the ‘zone’,” she said.

“But when I can’t write, I don’t try to force myself to get into the zone either,” she added.

With a couple of half-written novels lying, gathering dust, she is a firm believer of letting time do its trick. “What is the point really? The more you fiddle with it, try to force it out, the less convincing your writing will be. You will find yourself using phrases that make no sense and in some unfortunate cases, you might even end up rejecting your idea without seeing its completion.”

The best way to deal with the block she feels is to give yourself enough time to breathe, to come back to the idea once you are comfortable and start working on it. But what if the idea doesn’t appeal to you anymore after such a long gap? “Well, then it wasn’t meant to be. The human mind is a treasure trove of ideas.

It doesn’t matter if one idea falls flat, there will be more from where they came from and when you give an idea enough time, you are less attached to it as well and can view it objectively,” she says.

Peerbhoy’s visits to her grandparents’ home in her native Hyderabad made her realise the tragi-comic element that is still to be found in the khaandans (families) of Hyderabad. Khaandans who believe in reliving the past days of regal glory, families who believe that hospitality is the only way to win hearts and of course, families who believe in getting a suitable bride for their sons and of course, getting cuddly grandchildren who define the family name being propagated ahead.

A proud grandmother herself, Peerbhoy said that her favourite character is Sartaj Begum. “Though it feels great to be a grandmother, I would never become someone like Sartaj.  I have way too many other things to keep me occupied.”

Like her upcoming book about the Bombay riots of 1992. She would not tell us the name of this new book or when she was going to release it.

“My other book is very different from Marry Go Round. In 1992, after the civil riots, the ethos of Bombay changed completely,” she said, “I can be brilliantly funny but that was a time which can’t be laughed about.”

She dedicates “Marry…” to P G Wodehouse and Jodi Picault (American author who wrote some of the Wonder Woman comics, among other things).

Peerbhoy spent many years as Creative Director of frontrunner Bangalore ad agency MAA Communications Pvt Ltd, where she must have nurtured a lot of writing talent. On an encouraging note to aspiring authors she said, “Don’t be disheartened on cloudy days. Those always pass. And always remember your readers because they always need to know that you love them.”

She wrote a script for National Television with Honee Anhonee and Sara Jahan Hamara, two of the most popular shows of the 1990s in India. She has also written documentary scripts for BBC World.

As a writer, she has written three collections of short stories before her first full length novel. 'How I survived Motherhood (Muse Publishers), 'Madonna of Mumbai Cats and other Stories (Har Anand) and 'But Other Mothers Do' (Arc Publishers). The last is not only a hilarious take on the trials and tribulations of a young working mother, but also the book closest to her heart.

Along with being one of the most prominent faces in the literary and social circles of Bangalore, Peerbhoy has set up and run a British affiliated college in India (The Wigan and Leigh College, Bangalore) that specialised in studies in advertising, marketing and graphic design.

She is a student of Hindustani music and takes four classes a week lined up to mark her passion for the subject.