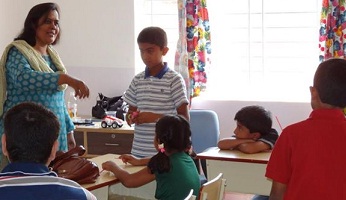 While Bangalore sleeps in late on Sunday mornings, Dr Sujatha Virdhe is busy working on balloon rockets, periscopes, hydraulic arms, satellite models, solar cars and other interesting stuff with the students at the Sunday Science School, perhaps grooming the next Thomas Edison or Graham Bell.

The Sunday Science School (SSS) began in 2011, in Maharashtra, when three doctors Suyash Dake, Dinesh Nisan (both from Pune) and Sujatha Virdhe (from Bangalore) felt that parents were getting too busy to pay attention to their children’s intellectual needs. "For 22 years, children have come to me for advice on Science and Mathematics. I have designed scientific toys for children. This was a progression," explained Dr Virdhe.

The Bangalore version of the Sunday Science School began in July 2012 and has 10 centres across the city as well as centres in Mangalore, Chennai and Madurai. A few more are expected in Mysore and Ramnagaram. Dr Virdhe runs all of these.

The school has programs for children between ages eight and 15 (the Junior Level, Level One and Level Two), for two hours on Sundays, running between for 16 to 25 Sundays depending on the level and the age group.

This academic year, the Sunday Science School started on July 14 across Bangalore and will go on till February 2014. The participating students will complete 25 to 75 activities, depending on the level. At the end of the academic session each student will have access to a number of science models and their very own home laboratory. The SSS includes a range of activities that cover energy, magnetism, biology, chemistry, motors, aero-models, sound, astronomy, electronics and robotics.

Dr Virdhe feels that science is about logical and rational thinking, but is made, "unduly complicated," by definitions and descriptions. She believes that this makes students lose interest in the subject and they begin to feel "terrified" by it. Her previous experience with children and her understanding that hands-on science and experimentation is "grossly neglected" in our education system, drove her and her colleagues Dr Dake and Dr Nisan to spread centres of the SSS across India.

There have been no patents yet though. But Dr Virdhe isn’t disappointed. She is confident and in fact asserts that the students are just getting into their own and inventions and patents are bound to happen sooner than later.

The courses at the Sunday Science School cost Rs 7,000 (for SSS Junior Level – ages seven to nine), Rs 9,000 (for SSS Level One – ages 10 to 14) and Rs 11,000 (for SSS Level Two – after completion of Level One). Dr Virdhe also added that the figures may vary by an additional Rs 500, depending on the centre chosen by the students. The money is used for the functioning of the centres and for the students to have the best equipment. Dr Virdhe explained that making money is not what drives her and her team – it’s her love for science and passion to impart better education to young people in the country. Dr Virdhe emphasised that the SSS doesn’t just help children from an urban background. They encourage parents from all backgrounds to get their parents to participate. She believes that a lot of talent and intent lies in rural areas and is trying to raise funds to enable children from under-privileged and rural backgrounds to join the Sunday Science School centres for free.