Home | wipro | Why flop on Fab India when you can curl up on Kashmir? 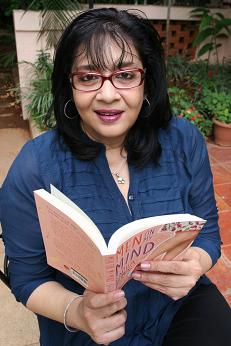 If you’ve been following this column, you may recall The Princess of Milton Street, one Miss Daisy, a doggie with her own car, her own silk-and-satin sheets, and temperament to match.  And she’s been acting more and more uppity lately.

You could say we humans are to blame.

If she wants to go out for a drive at 11:30 in the night, why we get dressed, pull out the car and go round and around the neighbourhood till our eyes are glazed over with fatigue.

If she’s in the mood for a snooze, we tiptoe gingerly around, trying hard not to make a noise. The standing instruction in our house is this: “There will be no vacuuming when Daisy’s sleeping. No blending of ice cubes. No clattering of crockery and no screaming on the phone, and no fighting with the gardener either.”

Maids, drivers and other people who keep our lives well-oiled and stress-free, think we are crazy to slather a mutt that walked in off the street with so much accord, so much importance. And they’re right. We are crazy. In love.

A couple of weeks ago, I had discovered a new dessert, a pre-Shakespearean bit of belly ballooning delight called posset. It’s made with cream, lemon and sugar (sugar substitute in my case).

Daisy loved it too.

I’d set my posset down on the table for a minute to go do something and when I came back I found she’d licked the ramekin clean. She’d never done anything like that before so I was puzzled. Not angry. What’s a little posset when you’re in love?

And then I realised that she’s becoming human, at least in her own mind. She doesn’t think it’s unusual or improper to eat what I eat.

‘I mean, it’s not as you don’t feed me off your plate anyway,’ I could hear her think.

She is a seeker of pleasure, a lover of fine things, a gourmet doggie with impeccable taste. She makes no, ahem, bones about any of this.

So as I try to attain higher levels of sophistication and classiness myself, she’s right behind me, picking up cues.

Which brings me to the Kashmiri, pure silk, hand-knotted rugs, 2000 count, that I found in a box. My mom’s. I had put them away after she died, because it was too painful to look at them.  But it’s been twelve years, the grief has dimmed a little. So I opened the box. I discovered to my delight that rugs are as soft and rich, as jewel-toned and velvety as I’d remembered.

I moved some rugs around the house (I might add that I love rugs), I stuck the Fab India dhurrie under the dining table, where Daisy usually sleeps, and in its place, under the coffee table in the living room, I placed one of the mom’s silk rugs.

Daisy made a beeline for it. She sniffed it up and down. I could smell the approval. Then she rubbed her face this way on the warp and that way on the weft. She drooled a little, but I didn’t care. She turned around three times (why do dogs do that I wonder) and flopped down in a doggie curl in the centre of the rug.

And that was that. She never went back to Fab India again.