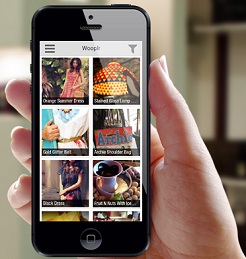 Wooplr is a website and app that encourages social sharing and discovery while you shop, eat or find something unique to show your friends and connections. Created by four Bangaloreans, Wooplr has gotten over 10,000 recommendations since it began.

Bangalore based start-up Wooplr is a social discovery platform. It lets people share and find things to buy. Whether it’s fashion, decor or food from restaurants around them. It lets you know what’s trending. The four co-founders of the company Arjun Zacharia, CEO, Praveen Rajaretnam, Head of Marketing, Soumen Sarkar, Technology and Product Manager and Ankit Sabharwal, in charge of front-end design and user experience, were colleagues at McAfee. They had a good working relationship and decided to start something on their own, as a bootstrapped outfit.

We asked Zacharia, what ‘Wooplr’ meant. He said, “It is derived from the word ‘Woop’ or ‘Woople’ which, according to the Urban Dictionary means ‘sound of extreme happinesss,’ which we believe is an integral part of discovering and shopping.”

Wooplr started in April 2012. Rajaretnam explained that the idea came about because they were finding it difficult to navigate the city themselves, with the resources and knowledge they’d already picked up. They found that it wasn’t enough to make the wisest of choices. They found themselves wondering where they could find this and that, and where could they eat this and that. They realized that it would have been excellent if they had the recommendations of a few of their trusted friends, which would make their experience so much better. “Shopping is inherently social and meant to be fun. In India, location specific information was still pretty much unorganised, we wanted to give users a new way to rediscover their city. We knew there was a need and thus Wooplr was born.”

The team first validated the idea with a contest in Jyothi Nivas College, Bangalore, when they asked a bunch of students, to share their own clothes, the ones on their backs so to speak with their friends. “The girls enjoyed the experience so much that the event went viral. At that point, we knew we had an idea worth pursuing. Four months later, we launched the beta version of Wooplr,” Sabharwal said.

Access to the beta was by invite-only. The first users were naturally the friends and family of the core team, the safest guinea pigs. After gathering their feedback and making changes and alterations to best suit the public’s tastes, they began inviting people from outside their social circle.

Rajaretnam added, “We went to places where our initial content creators were located. Mainly flea markets, colleges, foodie meet-ups, etc. On March 8th, which coincided with International Women's Day, we opened up Wooplr to everyone.”

Wooplr gets around 40 recommendations every day (10,000 since they started). The App has been downloaded on more than 1500 Android devices and over 250 Apple devices. Sarkar feels that the response has been encouraging. He states that that they receive emails from users who feel that they are helping other users discover new places, shop better and are also finding it useful to connect with people with similar tastes. “We have recommendations from over fifty cities across the world - even Pakistan, Iraq and Iran. In fact, we are getting queries as to when will we launch in the Asia Pacific region (Singapore in particular),” he said.

“What's Wooplr’s business plan? What’s the goal?” we wondered. Sabharwal said, “We have a good presence in Bangalore. We plan to scale to other cities - Mumbai, Delhi, Pune, Kolkata, Hyderabad and Chennai in the next 6 months and after that to other tier-2 cities. The goal is to be the future of social shopping in India and connect shoppers with awesome businesses around them. Our vision is that people should check Wooplr before they step out to shop or eat.”

Who are they competing with? Facebook? Zacharia disagrees. “We’re not in direct competition with Facebook or any other social network. We want to be the one-stop social platform for people to discover and shop based on their interest, location and friend circles.”

The concept and the reasons behind it are interesting. But long-term sustenance requires money. How does Wooplr plan to make money? Rajaretnam believes that in the near future, businesses will be charge for services via a ‘freemium’ model (basic services free, advanced features at a cost). They plan to offer additional features ranging from basic lead generation, to a transactional or sales model and detailed analytics. There are several other value-additions that will be provided depending on the type of business and package chosen.

Zacharia agreed, but also emphasised on the aspect of keeping it personal. His future plan is to make Wooplr more local, more targeted and more focused. The recommendations that a user will see on Wooplr will be tailor-made.

Zacharia is open to VC funding and perhaps even an acquisition, but stressed that their current vision, "is to build a useful and engaging product for people to help them discover and shop better."

Before Wooplr, the four of them worked together at McAfee, Bangalore. In addition, Rajaretnam, Sarkar and Zacharia had worked together to build a now defunct portal for users to report traffic violations in Bangalore.