Explocity Turns 33... And Jon Stewart, I Feel You, Bro 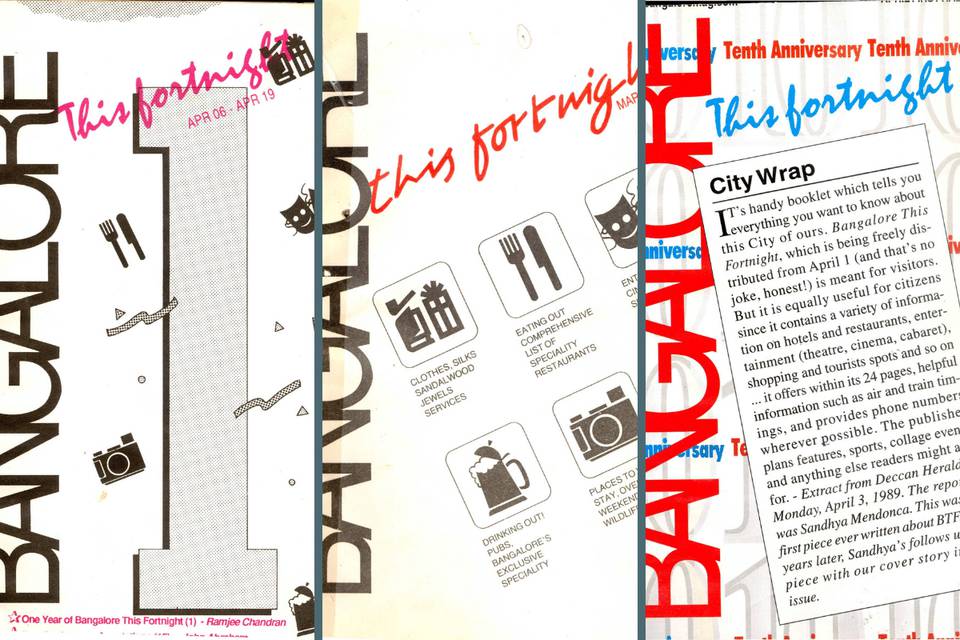 Today, 31 March 2022, is the 33rd anniversary of Explocity and in all my life, I had never been more clear that this is what I wanted to do.

Last night, 33 years ago, I was sitting in the printing press, proofing pages, minutes before the first edition of what was then called “Bangalore This Fortnight” went to press. Everyone who mattered in Bangalore called it “BTF”.

The first issue of  BTF was a slim little rag of 24 pages. In the ensuing decades I saw that grow to hundreds of pages, over dozens of editions in three countries…yet, it remained my little rag.

Sensing that these were too many fortnights, I had a brand epiphany that dumped ideas on my mind, like the relieved pigeons atop Queen Victoria in Cubbon Park.

And with the practiced ease with which we seek to erase history by renaming roads—and, grandly, cities—I called the lot “Explocity”.

Habits die hard. Twenty something years after I renamed all of them, the old Bangaloreans still call it BTF.

“Where else did you launch BTF?” someone once asked, with scant regard to my branding skills and the renaming of the metropolises.

“Bombay, Calcutta and Madras,” I retorted.

By then, we had also launched in New York City and Dubai—all part of my global domination plan. We had provided employment to hundreds of people and indeed, we employed over 200 fine folks at any given time.

And—I often said in admiration of myself—I had started with no capital and no help.

I was careful not to pull an Icarus, but other things melted the wax from my wings.

The financial crisis shuttered print magazines all over the world.

We—the old, ink-in-our-veins—print publishers, finally crawled out of our bunkers of denial to the sound of silenced presses and the sight of trucks hauling away to the recycling dump, a lifetime of publishing.

On the night that I—metaphorically—handed over the keys of the Explocity Galactic Headquarters to the landlord, someone had decided to strew the entire archive of hundreds of different editions, from different cities, of a timespan of over 20 years, on the floor—as one would if preparing a bonfire.

All the furniture had gone. So I fashioned a stool from a stack of BTFs and started to read through as many as I could at random. Every article triggered a memory…a back story.

Why Nana Chowk in Mumbai is so named. How the smells of vanilla from street vendors selling pretzels in New York City drove away the lingering scent of death after 9/11. There was a story about the first pay toilet in Bangalore.

Every page made me smile. I giggled here, LOL’d there and I did not realise—much to the annoyance of my driver—that I had been chuckling to myself very late into the night, immersed in these records…records of all I ever did, that was meaningful.

I am not given to sentiment. I am Spock.

But I was not going to let some soulless moving guys handle my memories.

I called in my trusted driver and an assistant and together we packed the remains of the day into several large garbage bags.

Typically, they would not have allowed me any manual effort. They frequently told me, if I did what they did, they would feel demeaned. And it suited me to avoid hard labour. But there is no org chart, no hierarchy, in turning off the lights.

We were simply three, slightly bummed-out dudes. We hefted the bags into the car and drove BTF to the nearest recycling depot.

As instructed by the Chief of Garbage, we left the bags on the sidewalk.

There was neither let nor leave nor grief in this exercise.

I am so done with you, lot, I told the bags.

There, I then told myself, I will no longer cause the chopping of trees.

I went home, said, “Right then!” to no one in particular and started to plan the next 25 years.

And when those are done, we will yet only celebrate our 50th anniversary.

It’s 33 years to the day that I filled an autorickshaw with copies of my new magazine and went to all the major hotels in Bangalore and dropped them off.

It’s 33 years to the day that a British couple on the street stopped me to ask for directions and in their hands was a copy of the crappy, but lovable edition of Bangalore This Fortnight. Dateline: Mar 31, 1989.

And it’s 33 years to the year that a close friend who was the head of an advertising agency, listened to my plan—to launch India’s first free magazine, distribute it all over Bangalore in the belief that advertisers will hand me money. And then he told me he had suspected all along that I was not of a stable mind.

Two days later, one of his clients had called him about this wow, bestest new magazine and is the back cover still available…?!

And the tech. I heart the new tech. So that I am not bamboozled into paying for carburettor repairs on my website, I taught myself how to program in Python and Django and lay down some script in Java and I built my websites.

My more recent colleagues are new and shiny. The older among them were born just before I had launched BTF. These are in their mid-30s, millennials and grasping at straws…but only to save the dolphins. One of them saves me from killing the tech.

The millennials are already too old for the Gen-Zs, who feel a greater kinship with me. We laugh at the millennials together and poke fun at them.

These shiny new people have no sense of hierarchy. They are like my baby dogs.

“Sit,” I order them, suitably stentorious, yet with affection and caring.

“Why should I sit. YOU sit,” they retort.

Both the millennials and the Gen Zs believe that I am, to manual labour, born. They have no problem that I do the heavy lifting.

Jon Stewart, I feel you, bro.

Would you like to submit your article to us or write for us? Click here and tell us about yourself.