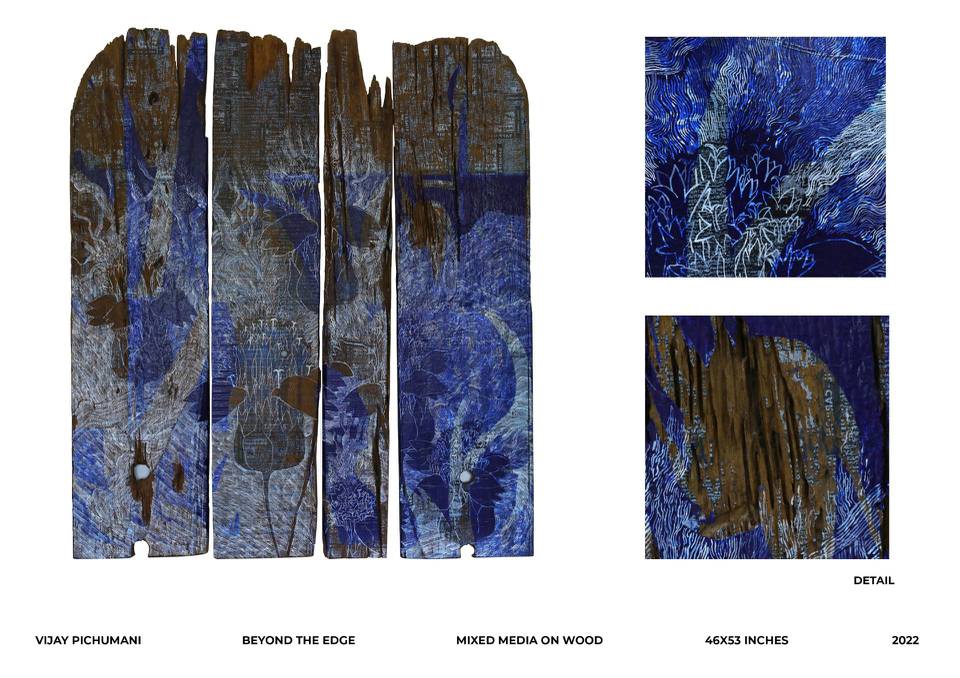 The opening reception on Saturday, July 23 2022 from 6.00 pm onwards. Senior Artist Dr.S.G.Vasudev will grace the occasion.

Vijay Pichumani [born 1987] is a Chennai based young, talented, prolific and a versatile artist, whose works foregrounds a strong connect with Gaia the mother earth or nature. His concepts and ideas originate in nature as reflection of art created by a powerful supreme being, with whom he finds a resonance, thus allowing him to draw out parallels between man, humanity and nature. This attitude and approach towards nature remain at the heart of his art making process. The origin of this approach and ideas nevertheless was the consequences of his upbringing and early part of life spent in a small village in Kanyakumari district in South India.

In his latest suite of works titled “Re - Imagined Reality”, which is to form the core of the show in Bengaluru, his thematic content is premised on flowers. The idea of engaging with flowers came to him while walking in his hometown, and along the muddy paths he discovered a number of colourful flowers that attracted him. It was a decision taken to articulate with flowers the relationships between the personalities of different individuals. He therefore initiated his conceptual journey by identifying individuals as flowers and associated the characteristics of the flowers with it. Hence he executed large composition, which are not individual wood boards but as two or three placed together to form either a diptych or a triptych, essentialising the nature and character of man as multidimensional, which cannot be generalized. The visual language is quasi abstract, as flowers are magnified in size and represented as contoured lines, with the background in chromatic hues.

An interesting work of this series developed as a triptych constitutes of men, women and children whose countenances are replaced by flowers. Against a black painted background on wood, Vijay has linearly carved the figures through his varied tools, imparting a powerful and a dynamic effect which is as energetic as it is contemplative. The work draws attention to the flower that replaces the faces of the human figures. The flower has the characteristics of optimism, energy, vibrancy, a flower that is attracted by the power of the light. Vijay interfacing with this particular flower establishes his engagement to transform as a metaphor of human nature that has the capacity to change according to situations. In all his compositions of this series, a sense of movement and rhythm is dominantly implicated.

Vijay ‘s approach of analyzing and conveying the concept meaningfully through his objects, materials and technique marks the artist’s brilliant approach to making art. Vijay’s works are centered in materials which becomes the crucial aspect of his art praxis. Materiality as understood within the contemporary context is an aesthetic notion impacting concept and meaning. Within the context of Vijay’s works, materiality is the artist’s process of investigation into the nature of his materials particularly his medium of wood as prints, mixed media paintings and sculptures whereby he frames meaning, which evidently gestures through objects materiality to nature and her vast realm. Just as art forms a nexus between imagination and reality, the notion about materiality in art is how art’s material qualities are sensed, interpreted and understood, creating an aesthetic experience when art materials are transformed, via the artist’s imagination, into thoughts and feelings that are then, received by the viewer. Vijay’s art therefore provides a bridge between ordinary experience and concepts, which then goes beyond the so called static nature of the physicality of the art work to intangible thoughts and feelings, which is both bodily and emotional. The articulations of perceptions and experiences through the aesthetic of materials, defines and contours Vijay’s artistic praxis, which allows him to mark a posture of distinct difference. The admirable dimension of Vijay’s series of works evolved over more than one and half decades is his versatility in conceptualizing different forms for clarifying his ideas and has remained successful in executing it. The heroic as well as poignantly dramatic expressions find representations in appropriate forms as wood cut prints and collographs, acrylics, oils, sculptures, installations and mixed media painting marking the ingenuity, creative ardour, committed dedication, emotional intensity and focussed passion toward the realization of his artistic expressions. The power of purpose and vision driving his art was the philosophical core of questions, in the quest of which he found answers which have been attempted successfully through his artistry and craftsmanship. His works in their evocative power and spiritual simplicity are a visual delight.

ABOUT ART HOUZ Launched in 2014, Art Houz’s arrival into Bengaluru’s contemporary art landscape was suffused with the verve of colour and the dynamism that it brings with it. Located on No: 63, Palace Road, Vasanth Nagar, the gallery is spread across 1,750 sq. ft. bringing the unique culture of art and architecture together in one space. Pristine white walls soaring up to 12 ft. add to its grandeur, giving contemporary art a while new vocabulary for display. Art Houz Bengaluru is ideal for exhibitions that seek to create a different dimension of experience, where the artwork, the artist and the viewer become a seamless entity of synchronised perceptual synapses.