Girish And The Chronicles (GATC) 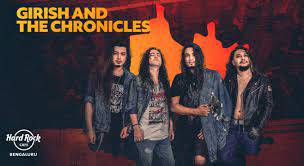 About the band : Girish And The Chronicles (GATC) is a LIVE hard rock band started by the lead vocalist/guitarist/songwriter, Girish Pradhan, on 18 October 2009, in Gangtok (Sikkim, India). The band is influenced by veterans like ACDC, Deep Purple, Iron Maiden, Led Zeppelin, and Guns N’ Roses. GATC’s sound takes you to the foundation of the Woodstock era of rock. Its originals are inspired from interpersonal relationships, day-to-day struggles, war, life onstage, life backstage, life offstage, and the band’s reminiscing rock n’ roll experiences. Their sound is a mixture of power ballads and hard rock/classic metal; they treat their fans with sounds of the 70s and 80s eras.

Terms and Conditions -Only patrons above the drinking age will be served alcohol (21Yrs +). -People in an inebriated state may not be allowed entry. -No outside food and beverages are allowed inside the venue. -No seating guaranteed. -Hard Rock Cafe does not take responsibility for the loss or theft of any personal belongings. -The consumption of any illegal substances is strictly prohibited.