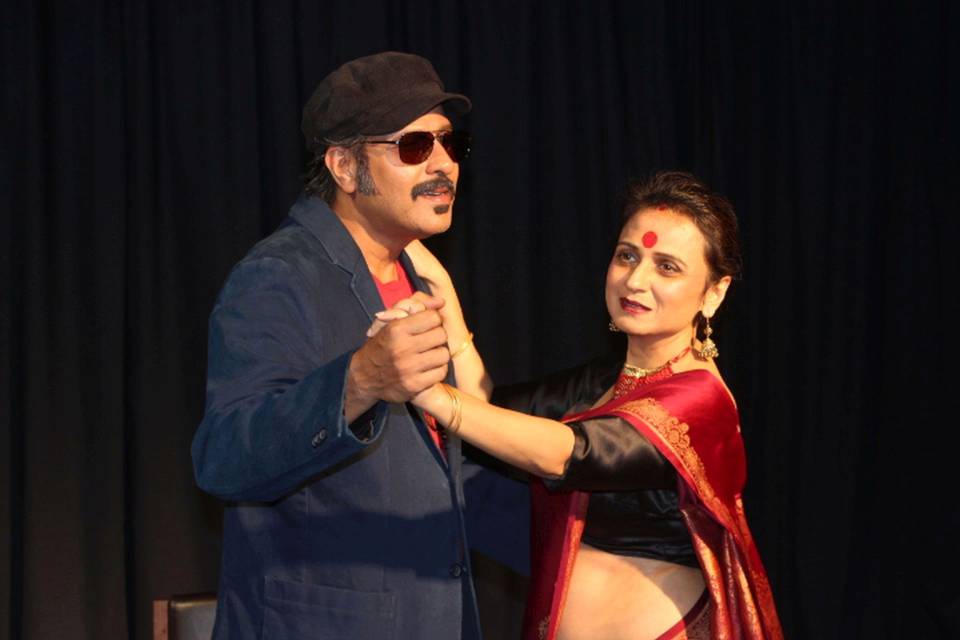 Aadhe Adhure is an iconic play written by Late Mr Mohan Rakesh, almost five decades ago. The play deals with the strained relationships of a middle-class family. It makes us question who is really responsible for the dysfunctionality of this family. Is it the mother who works day and night to make ends meet, but wishes to escape the clutches of the house? Or is it the father who believes no matter what he does, he is right and in no way harmful to his family? Perhaps it is the children who are drowning in their own selfishness, misery and hatred that they cannot fathom the possibility of their home falling apart. Maybe, it is none of them but the other men who find themselves entangled in this family’s deep-rooted problems. Whoever, it may be, the biggest question still remains unanswered. What will these mere humans do when they are forced to choose between their own happiness and what is morally acceptable? The director of this play, Zafer Mohiuddin, adapts the script into the current context because the nature of our relationships remains the same no matter the changing times The play Aadhe Adhure deals with dysfunctional families in urban India, which is very relevant to the current times where we have been in more contact with our families than ever before. The cast: Dr Kavita, Ashish Athawle, Divya Bajpai, Ganesh Pai, Sachit Murthy, Abhisjeet Sahay, Bhavani, Tarani Jindal, Syed Idrees, Robbie Abraham, Suhail Aryan. Zafer Mohiuddin Zafer Mohiuddin is an architect, Urdu & Hindi Playwright, an established and seasoned actor par excellence, a multi-faceted and multitalented director along with being an activist. He has been actively involved in theatre since 1979 and has worked extensively with many well-known theatre groups such as Samudaya, Bangalore Little Theatre, Manch and so on. He formed his very own theatre group, “Kathputliyaan Theatre Group” with the main purpose of promoting Indian theatre, art, music and literature. His passion towards theatre started when he was a student and he has also been a voice-over artist rendering his baritone voice to many advertisements, documentaries, and animated films. His interest in various things has made him a better director. Zafer Mohiuddin has directed and acted in many plays and they are always have quality rather than quantity. He has also been part of “Bikhre Bimbh” with Ms Arundhati Nag. He has written dialogues for “Malgudi Days”. His current directorial piece is Dastak. About Kathputliyaan Theatre Group: Inspired by the words of William Shakespeare, “The world is a stage and all men and women are merely actors”, Bangalore-based architect, voice-over and theatre artiste, Zafer Mohiuddin conceptualized Kathputliyaan Theatre Group along with other trustees. This organization was formed in order to focus on addressing significant social issues that are a hindrance to the progress and peace in our society through the medium of theatre as well as promote Indian literature, Arts, Music, and Drama. The first play of this group, ‘Darwaaze Kholdo,’ was staged in 1988 post which the group presented several Hindi and Urdu plays such as ‘Zabaan Mili Hai Magar,’ ‘Vaastu Chakkar,’ ‘Taj Mahal ka Tender,’ ‘Ek tha Gadha,’ ‘Daadh ka Dard,’ and many more, all of which played to packed houses. Kathputliyaan embraced music and dance in its presentation encompassing the essence of performing arts and promoting it through runaway hits such as, ‘Zikr-e-Ghalib’, ‘Tipu Sultan ke Khwaab’ written by Girish Karnad; translated and directed by Zafer Mohiuddin, which again played to packed houses in India and abroad. ‘Shaadi ki Kirkiri,’ a play in Hyderabad's Deccani dialect based on the book ‘Merry Go Round’ by renowned author and playwright Sadiqa Peerbhoy, was again translated by Zafer Mohiuddin and directed by him. The passion of the director is to continue encouraging arts and literature along with saving and restoring the beautiful world of theatre, art and music, thereby bringing the best of performances to the audience in India and abroad.