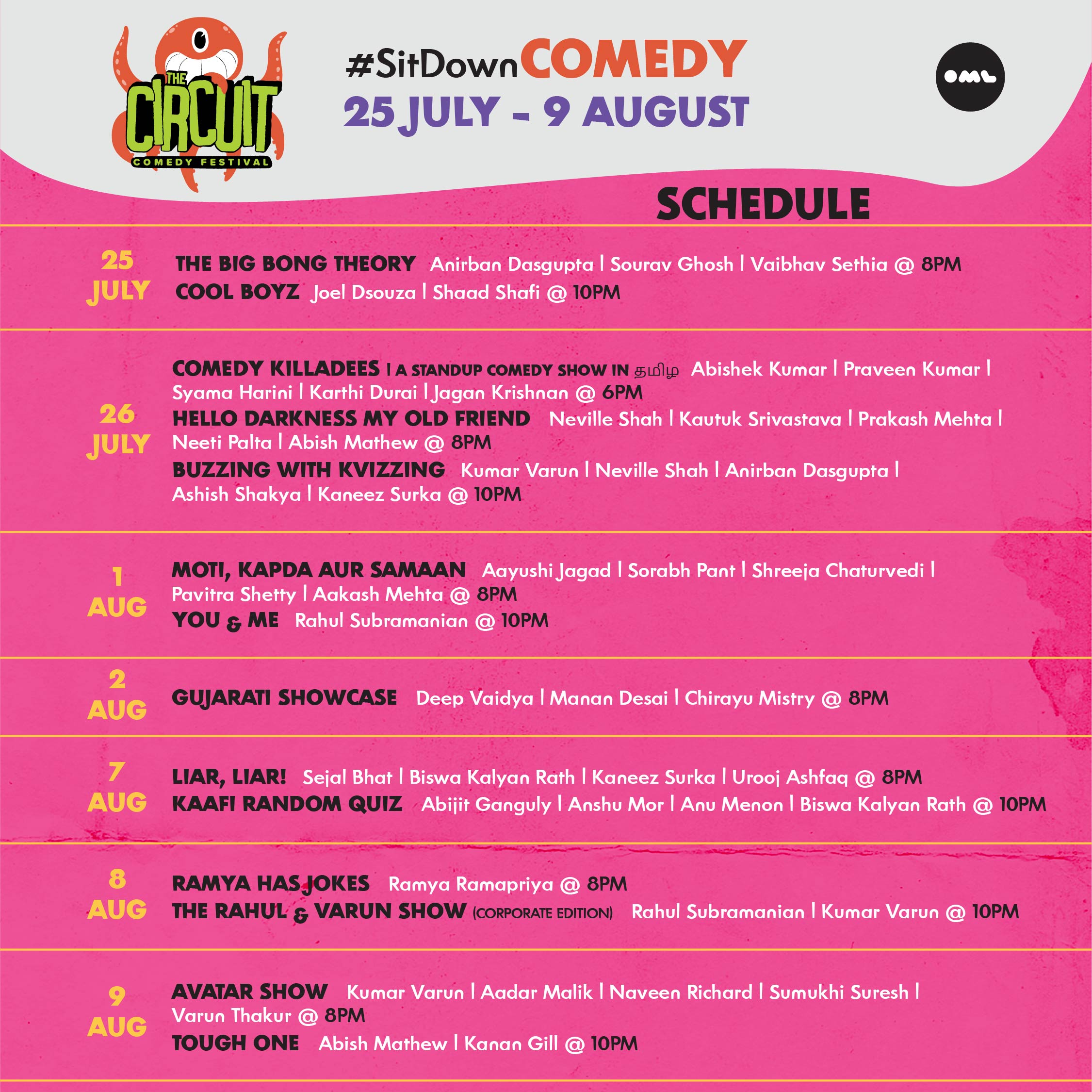 Bengaluru: July 2020 - OML’s much loved comedy festival ‘The Circuit’ is back with its latest digital edition of #SitDownComedy that features refreshingly new shows including ‘Tough One’, ‘Moti Kapada aur Saman’, ‘Liar Liar’, The Avatar Show, ‘Kaafi Random Quiz’, ‘Comedy Killadees’ and ‘The Rahul & Varun Show’ show. The third edition of India’s first digital comedy festival will go live all three weekends starting July 25, with each Saturday-Sunday offering something rib-tickling humour for its viewers.

The new shows are:

‘Tough One’ with Abish Mathew featuring Kanan is an existential game show where the guest needs to choose between two tough options provided, while the live audience also plays the game on the insider app.

‘Moti Kapada Aur Saman’ hosted by Aayushi Jagad combines the two most unlikely things - comedy and ‘fashun’. She’s joined by a panel of comedians including Sorabh Pant, Shreeja Chaturvedi, Pavitra Shetty and Aakash Mehta who aspire to become the Sabhyasachis of comedy. This show guarantees the laughs but takes no responsibility for the 'fashun' sense and ‘advice’ given by the performers.

‘Liar, Liar’ features bold, reality-bending comedians Sejal, Biswa, Kaneez and Urooj who are unable to distinguish fact from fiction. On this show, the host Sejal plays the ultimate game that reveals embarrassing and unusual facts about his fellow comedians as well other famous people

‘Kaafi Random Quiz’ by Abijit Ganguly is a completely unexpected sort of comedy show where things get kaafi random. Abijit Ganguly, throws random questions to the comics Anshu Mor, Anu Menon and Biswa K Rath and is sure to receive some crazy hilarious answers that will wrap your evening with laughter.

‘Comedy Killadees’ - A Standup Comedy Show In தமிழ் (Tamil) which promises a whole lot of craziness, comedy and fun. Be prepared to binge on some native jokes performed by comedians like Abishek Kumar, Praveen Kumar, Syama Harini, Karthik Durai and Jagan Krishnan

Sit back, and let ‘The Circuit’ #SitDownComedy edition take you to a happy place for these three weekends!

You can now book tickets for your favourite shows on: