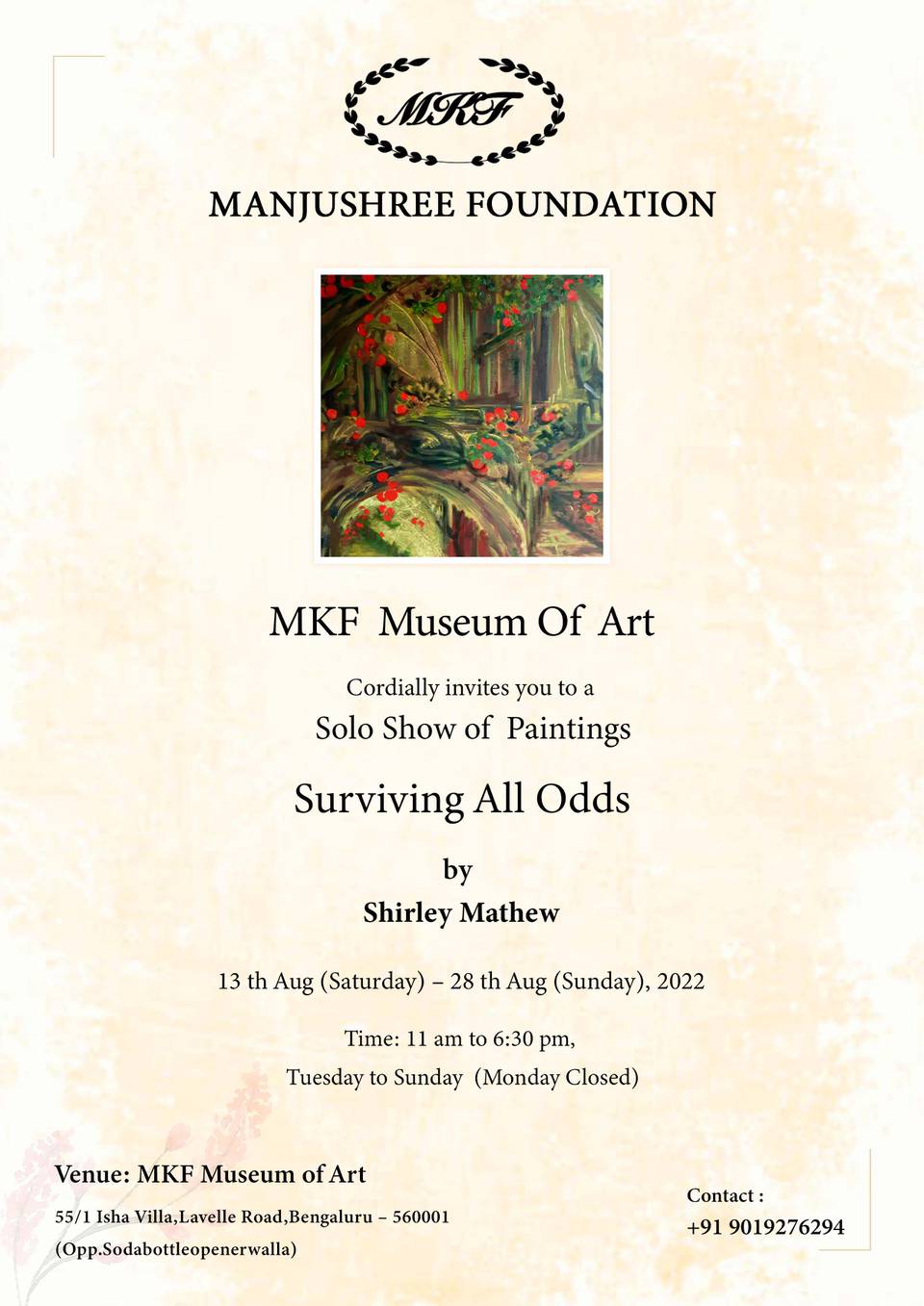 Surviving All Odds is a solo show by Artist Shirley Mathew at MKF Museum of Art.

About the show
A time to remember in the not very distant past, when humanity went through challenges and Nature took her own path from survival to reconstruction. One experienced angst and isolation while senses sharpened to hear birds twittering, trees swishing in the wind and observing that rains washed away the grime left behind by man-made intrusions in an urban scenario. Picasso once famously quoted, “ Art washes away from the soul the dust of everyday life...” a sentiment that leaves one to ponder over!

My constant has been a relentless attempt to continue the narrative of Nature’s course in the battle for survival with Mankind! Using visual symbolism in my works, I would like to create a bond with the viewer and to share my experience as a city dweller. There is an emotional resonance that is embedded in each creative expression on paper and canvas surfaces applied with mixed media.
SHIRLEY MATHEW Artist/Art Consultant/Curator

Artist Brief
Shirley Mathew, graduated in Psychology (Hons), Jesus and Mary College, Delhi and later opted for intensive studies in art at the Corcoran College of Art and Design in the US. Her instructors were Internationally known (late) William Christenberry, Steven Cushner and Jeanne Porter. Further trained in Barcelona, Spain at the Escola Llotja, the institution where Picasso studied in his early years. She worked at the Garhi Studios of Lalit Kala Akademi, Delhi on invitation by erstwhile Chairman Mr.R.B.Bhaskaran. It was enriching as an artist while her studies in Italy led to another dimension in her creativity.

Shirley represented Karnataka at the Art Fusion Show, Mumbai, to commemorate the Golden Jubilee of Statehood of Maharastra. More than two decades of her creative journey have led to participation in over sixty shows including several solo shows and works displayed in ten cities of India. She has completed courses in Madhubani Painting and Basic paper making courses conducted by eminent artists.
Her works are in the collection of private homes and Corporate Houses in India and abroad.

She is currently the Art Consultant at the MKF Museum of Art, Bengaluru and curates shows for eminent and upcoming artists. She lives and works in Bengaluru, Karnataka.