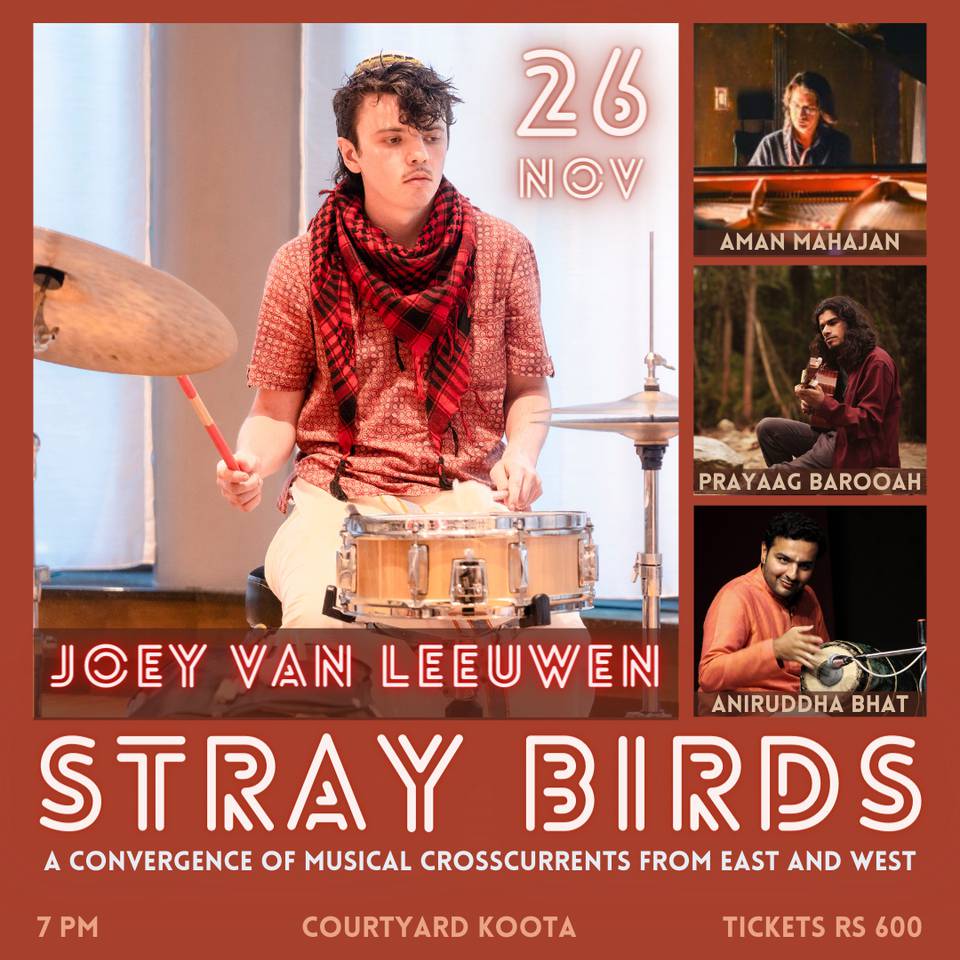 Stray Birds is a convergence of musical crosscurrents from East and West. Drawing on the intricate melodies and rhythms of Indian music and the rich harmony and freedom of jazz, the music is immersive and transcendental, taking the listener through an imaginative landscape of their own fantastic design. Led by American drummer Joey van Leeuwen, the band is making its Indian debut in Bangalore. Joined by Aman Mahajan (electric piano), Prayaag Barooah (guitar) and Anirudha Bhat (mridangam and khanjira), this is a concert not to be missed. Joey van Leeuwen : drumset Aman Mahajan : electric piano Prayaag Barooah : guitar Anirudha Bhat : mridangam and khanjira Award-winning American drummer and composer Joey van Leeuwen is a rising star across India, where he has made his home for the past year. Born and raised in Rochester, NY, USA, he grew up on jazz music which he learned both in the classroom and in the streets and clubs of New Orleans. Notable performances include the New Orleans Jazz and Heritage Festival, French Quarter Fest, New Orleans Sacred Music Festival, Congo Square Rhythm Fest, and the Xerox-Rochester International Jazz Festival. During half a decade in New Orleans, he studied Ewe and Fon drumming with Logan Schutts and Damas “Fan Fan” Louis, drumming in the Rosalie Alley Voudoun Temple, and performed Fon traditional music for His Majesty Hougan Dada Dagbo Hounan Houna II. For many years, he has also studied Carnatic music and has learned under Sri Umayalpuram Mali, Sri Suresh Vaidyanathan, and Dr. Rajna Swaminathan. Joey has also performed with Carnatic percussion superstar Dr. S. ‘Ghatam’ Karthick and the Indian Music Experience Faculty including the legendary Dr. Suma Sudhindra. He performed with Brazilian guitar virtuoso Geovane Santos for several years and has toured the US with singer-songwriter Daphne Lee Martin as well as performing in the USA and India as the leader of his own jazz group. He was also featured as a lecturer at the Indian Music Experience Museum in Bengaluru and the Global Music Institute in Delhi. Joey holds a Master’s in Contemporary Improvisation from New England Conservatory and a Bachelor’s in Jazz Studies from the University of New Orleans. He is sponsored by Saluda Cymbals. Indian pianist-composer Aman Mahajan plays improvised music as a medium of exploration, expression and exchange. His music is often reflective, influenced by a diversity of traditional and contemporary forms from around the world, and inspired by a search for unity and connection. His 2019 solo piano album REFUGE explores ideas of home, paying homage to inward journeys. Mahajan has performed widely on the Indian music circuit, and internationally at venues including Moods (Zürich, 2020), Murszene (Graz, 2019), Jazzwerkstatt (Graz, 2018), Jazz Utsav (New Delhi, 2017), EUROPAFest (Sinaia, 2015), Festival of Sacred Music (Thiruvaiyaru, 2015), Goa Jazz Festival (Goa, 2014), IndiEarth XChange (Madras, 2014), Rhythm & Blues Festival (Kasauli, 2014), goMAD Festival (Ooty, 2013) and MAD Festival (Ooty, 2012). Presently based out of Bangalore, he is involved with his original music project Refuge, and collaborations including Tinctures with Berlin-based guitarist Nishad Pandey, a duo with vocalist Radha Thomas, cross-cultural trio Mystik Vibes with percussionist Muthu Kumar and flautist Amith Nadig, and a new project with contemporary Carnatic violinist Apoorva Krishna. Focussed on the development of the contemporary improvised music scene in India, Mahajan also teaches privately from his piano studio in Bangalore, and has been a returning faculty member at the Global Music Institute, Delhi. He curates performances at a few independent venues in Bangalore. Prayaag Barooah is a jazz guitarist, composer, arranger based in Mumbai and Guwahati, India, dabbling in a wide array of musical genres (jazz, pop, rock, funk, r&b, fusion) and film music scores. He has shared stages with some of the country’s leading musicians, including Sanjay Divecha, Adrian D'Souza, Ron Cha, Aron Nyro, Teji Toko, Andrew Kanga, Anurag Naidu, Abhinav Khokar, Marios Menelaou, Dove Balu, Kalpana Patowary, and Shirish Malhotra, among others. Having worked with some of the principal studios in the industry as an arranger for film scores and advertisements, Prayaag now offers his musical talents as a live performer and producer. Anirudha Bhat started learning mridangam at the age of 12 from Vid. M.V. Mohan, and is currently pursuing advanced training under world-renowned mridangam maestro Vid. K.U. Jayachandra Rao. He is an A-grade artist with All India Radio and Doordarshan and has performed in many national and South Zone programs. He has accompanied many reputed musicians of the country at prestigious music festivals in India, USA, UK, Africa, Australia and several European countries. In 2021, Anirudha was awarded the prestigious Ananya Yuvapuraskara from the Ananya Sangeetha Sabha. 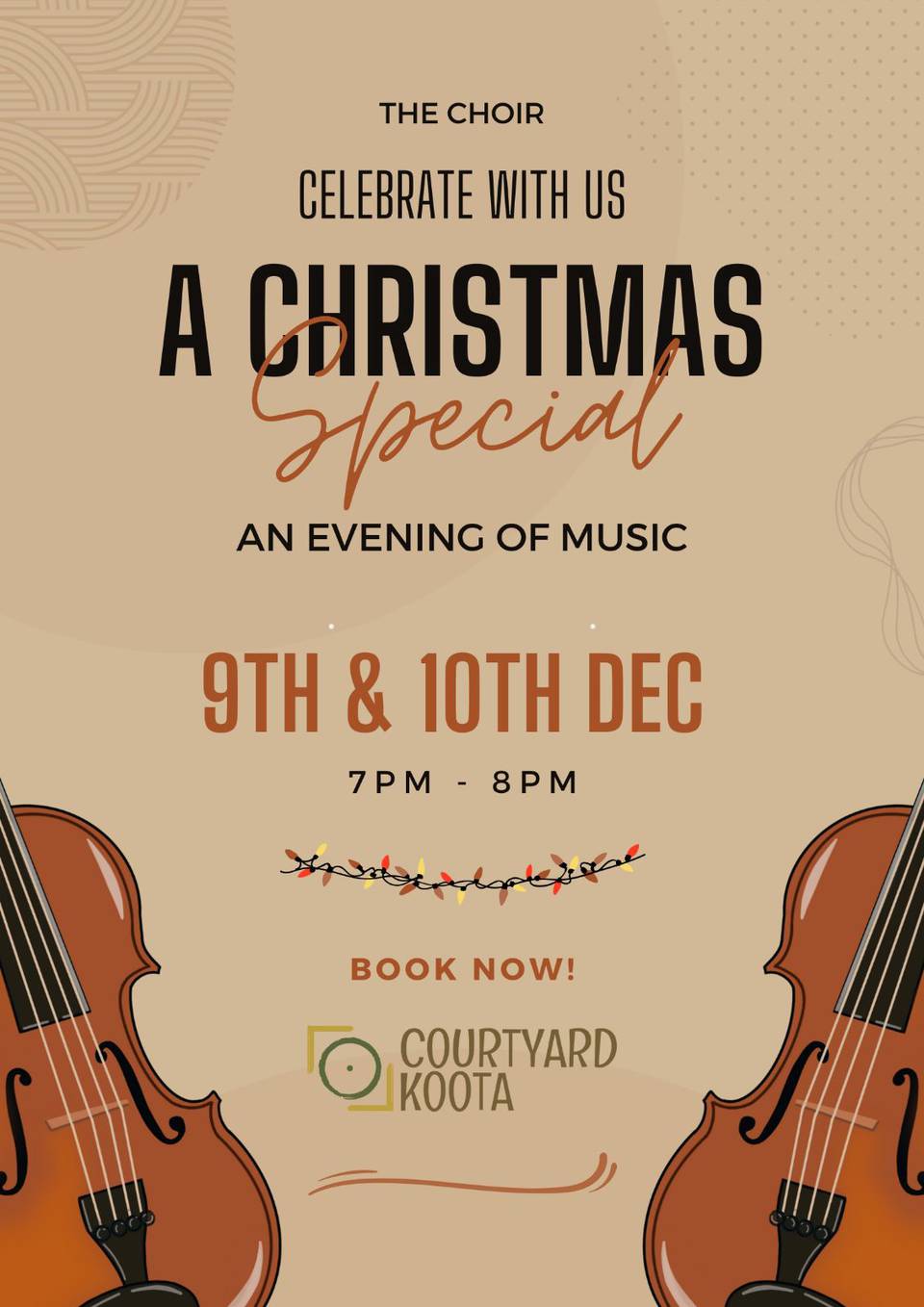 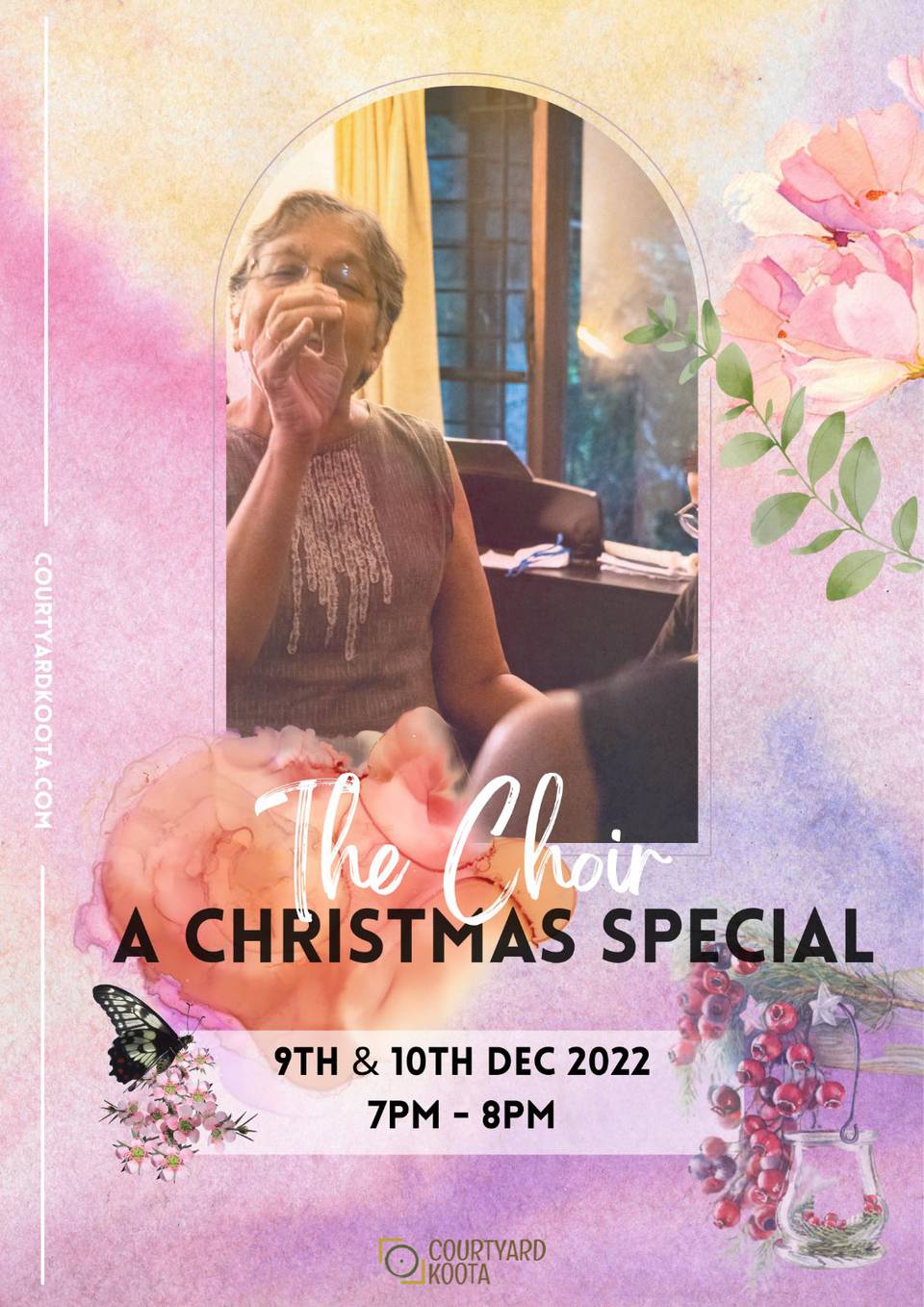 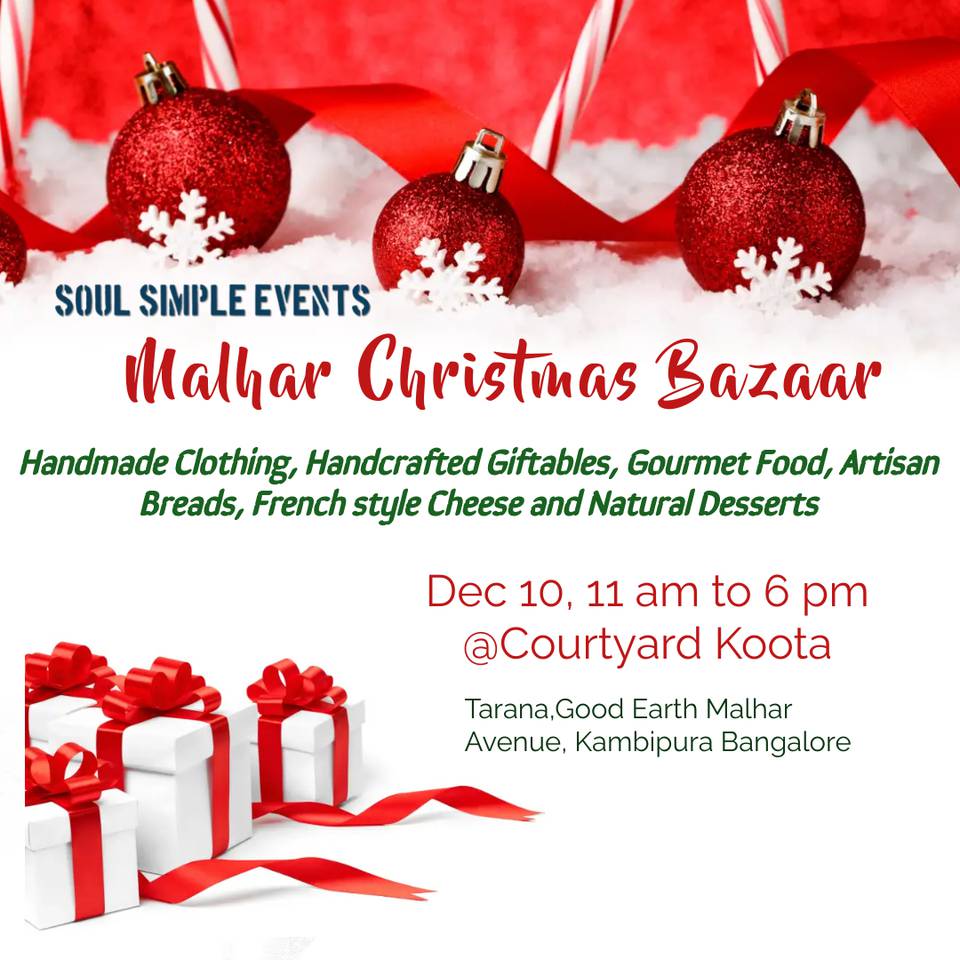 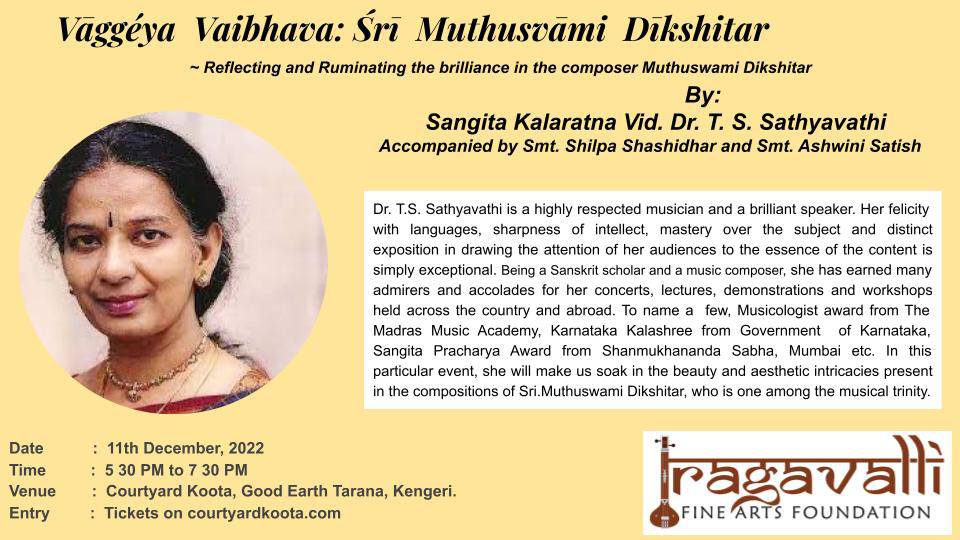 Reflecting and Ruminating the brilliance in the composer Muthuswami Dikshitar 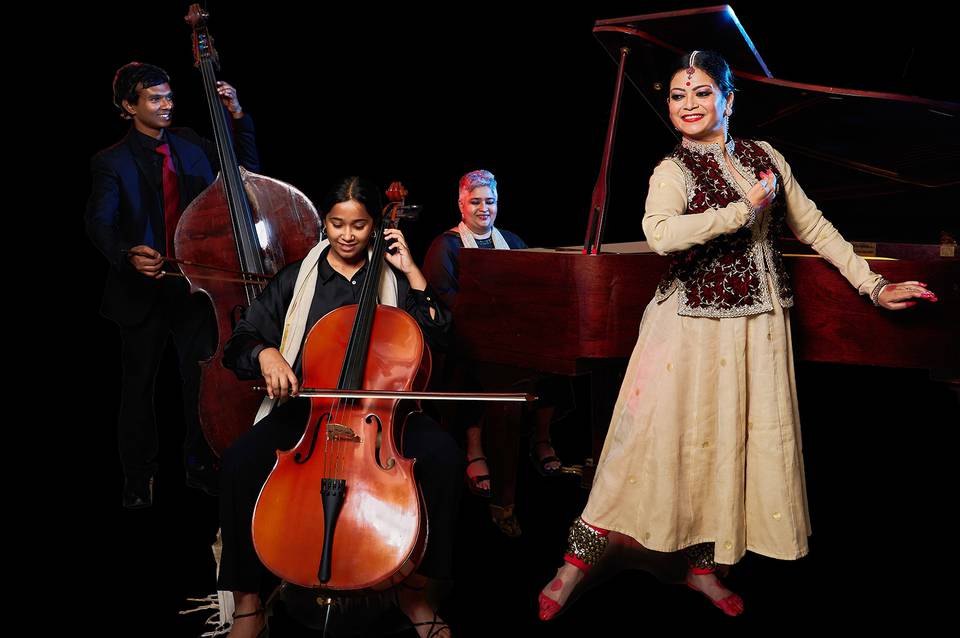 River Flows in You