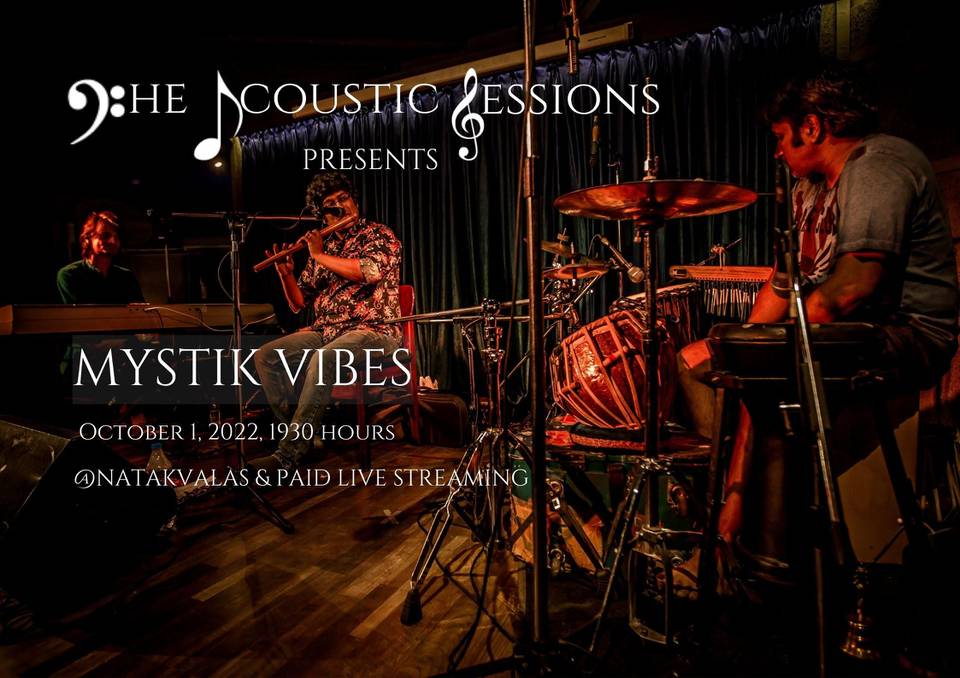 N.B. There are two performances of this concert on the same evening Wild Dance Under 25s : 1730 hours Booking https://sklbx.com/D8muogcw Wild Dance Venue & Paid Live Streaming : 1930 hours Booking: http://allevents.by/natakvalasLLP N.B. Please ensure you book using the correct link, especially for the paid live streaming options MYSTIK VIBES Music without barriers Mystik Vibes is a dynamic cross-cultural trio that presents Indian music in a contemporary context. comprising Hindustani tabla player + percussionist Muthu Kumar Carnatic flautist Amith Nadig and contemporary pianist Aman Mahajan. Each musician is also a solo artist in his own right who has performed and collaborated internationally across the musical spectrum. As a result the band's sound, though rooted in Indian music, is tinged with traditional and contemporary musical influences from around the world. The band has had a history of performing at music venues, concert halls and private events across India including NCPA (Bombay) Prashanti Nilayam (Puttaparthi) Bharat Nivas (Auroville) Chowdiah Memorial Hall (Bangalore) and many more.

AMAN MAHAJAN Aman Mahajan is a pianist, composer and improviser based in Bangalore, India, playing improvised music across a diversity of musical idioms. His current work is influenced by traditional and contemporary forms of music from around the world, often concept-driven, and inspired by a sense of unity and connection. He is keenly interested in improvised music as a medium of interaction and exploration. Mahajan has performed widely on the Indian music circuit and internationally at venues including Moods (Zürich 2020) Murszene (Graz 2019) Jazzwerkstatt (Graz 2018) Jazz Utsav (New Delhi 2017) EUROPAFest (Sinaia 2015) Festival of Sacred Music (Thiruvaiyaru 2015) Goa Jazz Festival (Goa 2014) IndiEarth XChange (Madras 2014) Rhythm & Blues Festival (Kasauli 2014) goMAD Festival (Ooty 2013) and MAD Festival (Ooty 2012). Presently based out of Bangalore he is involved with his solo piano project Refuge and collaborations including Tinctures with Berlin-based guitarist Nishad Pandey a duo with vocalist Radha Thomas and cross-cultural trio Mystik Vibes with percussionist Muthu Kumar and flautist Amith Nadig.

AMITH NADIG Child prodigy Amith A Nadig comes from a family of musicians and naturally, music runs in his blood. Son of noted flautist B K Anantha Ram, and grandson of renowned vocalist. A Rajamma Keshavamurthy, Amith was found blowing into the flute at the age of two. Amith’s learning started at the age of four at his father’s feet. After six years of rigorous practice under his father-guru, Amith went out well-groomed and gave his first performance at the age of ten. A regular performer at the Thyagaraja Aradhana at Thiruvayyur, Amith has so far given hundreds of recitals and has won many awards. On one occasion, Sri. Ganapathi Sachidananda Swamiji, much impressed, honoured Amith with a gold bracelet and a shawl. On another occasion, when Amith played to a select audience of noted scientists overwhelmed scientist Dr Kasturirangan hugged Amith and wished him further fame. Amith is on Central Govemment scholarship and is equally good at studies. Asked what he wants to become when he grows up, says Amith : “Though music is my first passion, I want to become a software engineer”.Flute maestro Ramani as his idol, and with veteran R K Srikantan’s guidance, Amith is all set to outclass his father-guru. Says Anantha Ram : “It will be my happiest day when I see my disciple-son outperform me.”

MUTHU KUMAR Muthu Kumar has been playing the Tabla since the age of five.having trained under Legends Ustad Alla Rakha, Ustad Zakir Hussain and Pandit Yogesh Samsi, Muthu has been a freelancing tabla player and lending his tabla accompaniment to musicians from various genres of music ranging from Hindustani classical, Karnatic rhythmic ensembles to popular film music, ghazal, fusion, hip hop, gospel, rock etc. In the 15 years of professional tabla playing, Muthu has developed his own unique groovy style which has created a niche for him in the world of professional tabla playing. With a huge collection of percussion instruments and skills from his travels around the world, Muthu has created his own unique sound with a percussion set up consisting of a Cajon, a darbuka, bongo drums, tablas, kanjeera and a wide range of Small effect percussions. He has accompanied many great musicians from musical genres as varied as Jazz, Bhajan, Indian Classical, Ghazal and Fusion to name a few and is the founder of Mystik Vibes and Layaa Productions.

Brought to you by: Ahan & Ranjan Kamath Curators, The Acoustic Sessions