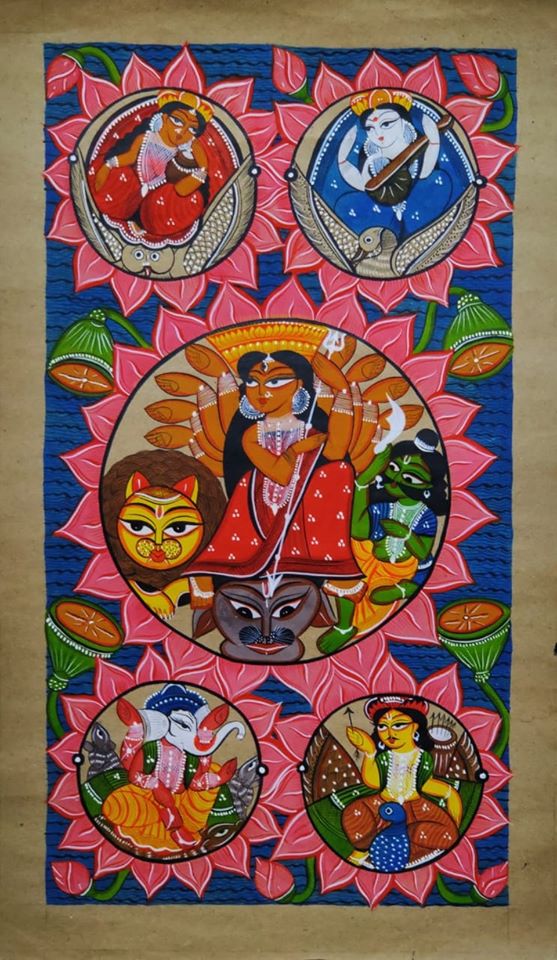 VAG is presenting a curated selection of Indian folk art including refined Tanjores and Pichwais by award winning artist Suvigya Sharma. The collection also includes Kalighat paintings by artists Rup Sona and Sumana. Based in a remote village close to Calcutta, this artist couple belong to a cluster of Kalighat artists that have been struggling to create a sustainable income for their survival. This exhibition celebrates the diversity of Indian Folk Art. Each art form has a unique blend of mediums, textures and subjects which have been mastered by artists over several generations. The exhibition is curated by Art & Beyond by bringing together artworks of a renowned artist Suvigya Sharma and lesser known struggling artists of Indian Folk Art.

The collection will be exhibited at Vasant Art Gallery (VAG) at the new Grand Mercure Bengaluru Hotel, Gopalan Signature Mall from the 15th of February and will go on till the 14th of March 2020.

Suvigya Sharma, a renowned Indian Artist who loves to paint with a modernistic twist, belonging to the revered line of Nathdwara Painters, started painting at the early age of 7 and practiced traditional fine miniature art under the tutelage of his father, the legendary artist R K Sharma.

Miniatures are one of the oldest art forms dating back to almost 5000 years, and is made using natural vegetable dyes, semi and precious stones. Miniature art was losing its importance and gradually being replaced by contemporary art when Sharma stepped in to keep this Indian heritage alive. Sharma has mastered the craft of fusing 24crt gold Tanjores with miniatures. His art form is more refined than Tanjore, which is traditionally thick with coarse detailing. His technique uses minute detailing where the gold can be separately seen.

Suvigya’s efforts have been widely appreciated, winning him several accolades including mentions in Asia Book of Records, India Book of Records and Limca Book of Records. He was the only artist in the Make In India campaign.  Furthermore, he has been the recipient of several prestigious awards like Rajasthan Gaurav Award, Pride of Rajasthan Award, Bharat Gaurav Award in 2019, and will be receiving the prestigious President Award by Honourable President Shri Ramnath Kovind at the Rashtrapati Bhawan in February 2020.

The artist has also been featured in coffee table books like ‘Who’s Who of the Industry’ Rajasthan and Rajashthan’s Most Powerful 10. Most Powerful 10. An enviable list who owns his creations include PM Narendra Modi, Barack Obama, Hillary Clinton, Dalai Lama, Priyanka Chopra, Sachin Tendulkar, Virat Kohli, Justin Bieber and business families from the nation's upper echelons such as Birlas, Ambanis, Piramal and Bajaj.

Suvigya’s work expands beyond miniature art to pichwai, fresco and restoration of historical works at Jaipur City Palace, Humayun’s Tomb, Agra and Singapore Art Museum. He has touched the lives of 1000's of artists and provided them with employment and work

Modern day depiction of Tanjore's made on handmade canvases, painted with freshly prepared vegetable dyes and exquisitely gilded in 24 carat gold. These works are famously known as ‘Bardashat ka Kaam’ meaning the ‘Art of Tolerance’ as the technique involves the artist to meticulously paint under a magnifying glass.

Pichwai is a style of painting which originated 400 years ago in Rajasthan and illustrates classical Indian poetry, literature and myths hand painted on silk, muslin or paper. Various pigments like metallic, organic, minerals and synthesized minerals are used in the painting process. These pigments have to be prepared well before use. The base material or Bhumibhand is pasted on a plain surface and burnished for even-ness. The next step is line drawing or Rekha Karma which involves sketching the composition using either black ink - syahi or red lac - alta. The colours are filled in by a process called Ranga Karma and shaded – vartana using various dry and wet techniques. The final outline or Lekha Karma is drawn with a fine brush. The last step is painting a border or Hashiye with extreme care and precision. Creating a Pichwai can take several months and requires immense skill.

Kalighat painting originated in the 19th century West Bengal, India, in the vicinity of Kalighat Kali Temple, Kalighat, Calcutta, India. Untouched by modernisation depicting mostly Indian Gods and goddesses, the art is characterized by flawless strokes, brushwork, simple and bold drawings giving a sense of antiquity and vintage nostalgia. Using natural colours from turmeric, plant and fruits extracts and painted on old fabric or paper, the process is elaborate and time consuming.

Project Art 2020 is an art initiative of Art & Beyond to revive, promote and create sustainability for Indian folk Artists. The exhibition is curated by Art & Beyond by bringing together artworks of a renowned artist Suvigya Sharma and lesser known struggling artists of Indian Folk Art.