Home | Culture | An Amalgam Of Films 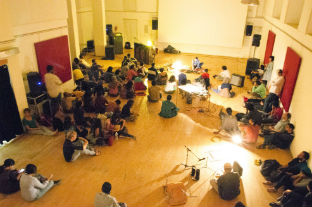 Experimenta 2013, India’s only independent international festival celebrating Experimental Films, was back in Bangalore for its 8th edition from November 27 to December 1. Rejoicing Moving Image Art, once every two years, the Experimenta Film Society was promoting experimental films at the Max Mueller Bhavan and Badami House, Bangalore. Samskara, an award-winning movie by Pattabhi Rama Reddy, was a part of Experimenta’s opening act and was well received by participants and an enthusiastic audience. “Through Experimenta, we try to create an audience for experimental movies,” said Maureen Gonsalves, Programme Co-ordinator of Max Mueller Bhavan.

As Max Schumacher, theatre director and researcher and Stefanie Schulte Strathaus, film curator spoke of the developments in their fields of work, Bangalore based Prakash Belawadi brought together these aspects, introducing his own essence to the talk. Another notable talk was given by actress Sussane Sachssse, who helped “rethink female agency on stage and screen,” and also discussed her work with eminent directors. A musical sense remained throughout the festival, with artists like Akio Suzuki, Aki Onda, Niki Neeke and the Indian Sonic Research Organization (ISRO).

With an international jury that added prominence to this five day event, and an active participation from the best of the lot, Experimenta 2013 turned out to be an amalgam of differences. Be it experimental music performances, talks by the most successful experimental artists or even the most detailed movies showcased from all over the world, this international fest brought together many aspects of moving image art, not to mention a variety in the crowd that participated in it. As Maureen put it, “Experimenta tries to encourage an audience and create an appreciation for experimental films. And seeing a fantastic mix in the crowd, we definitely feel we have reached out to a wide audience.”