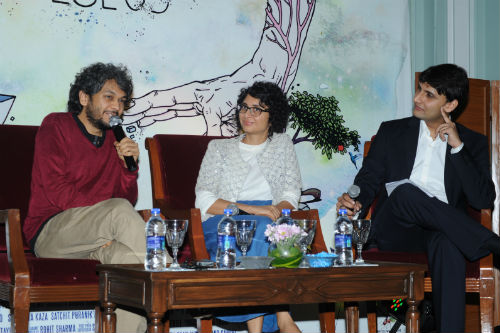 The million-dollar question was if Kiran Rao had received any inputs from her famous husband, Aamir Khan. “Yes, soon after I watched the film, we showed it to him and he loved it just as much. He agreed that the film should get a widespread release."

Ship of Theseus is making waves in the international film circuit. Directed by Anand Gandhi, it premiered at the 2012 Toronto International Film Festival, receiving immense critical acclaim. It was touted as ‘the hidden gem of the year.’

The film took three years to develop and was shot mostly in guerrilla style (non- professional, amateur) filmmaking by Gandhi and producer Sohum Shah (who incidentally is also one of the main actors in the film). It has been hailed as ‘the most significant film to come out of India in a very long time.’

It was during the screening of the film at the Naya Film Festival in Mumbai where director/ producer Kiran Rao saw the film and was so taken in by it that she decided to come on board as a presenter. It was after her involvement that Disney UTV attached itself to this film as distribution partner.

Rao and Gandhi were in Bangalore to market the film and talk about its relevance, and the market for ‘art house cinema.’

According to him, there are huge philosophical and spiritual elements in the film, which correspond to the Theseus’ paradox (that raises the question of whether an object that has had all its components replaced remains fundamentally the same object). “This was the right title and it remained so throughout. There was never a question about changing it,” Gandhi said when asked about the title and the likelihood of disconnect with an Indian audience.

Kiran Rao explained why she lent her name to the project. “Well, it was after I saw the film at the Naya Film Festival in Mumbai. I was completely smitten. I just wanted to meet Anand and take him home (laughs), which I did. I remember before the screening of the film, Anand came up to me and very excitedly wanted to hug me and I was like—‘ok, who is this guy?’ After watching the film, I wanted to go and give him a hug,” she said with a smile.

“I felt its important for a film like this to reach a wider audience and I wanted to know if there was any way I could help and it was then when he (Gandhi) suggested that I come on board as a presenter.”

Gandhi had no reservations about bringing Rao on board. “No, not at all. In fact, one important thing I’ve learnt from this experience is to be comfortable in asking. There is nothing wrong in asking. I’ve managed to overcome that particular apprehension post the making of this film.”

He shared an anecdote, “ I remember we were shooting in Sweden, It was a common friend’s outhouse that we were staying in at that time and I was thinking about how this outhouse was so much better than my own house back home (laughing). I asked my friend if the owners would allow us to use the house as a shooting location, to which my friend replied, ‘In Sweden, the obligation lies not in the hands of the one who’s asking but the one who’s being asked.’ He said, ‘that’s the way it works here, so if you ask, they won’t refuse.’

“So I took this burden upon myself and asked them if we could shoot in their outhouse, and they graciously agreed. So even when it came to asking Kiran to lend her support and name, I did not hesitate. I just asked. You know the thing is, that whenever I’ve asked for something, I’ve always got a very encouraging response. From anyone over anything—people are always ready to help and support. I kind of knew that if I asked Kiran would not refuse. However, what I did not know or foresee was the she would leave everything else aside to concentrate completely on this. From the marketing to publicity to promotions - she has managed to create this wonderful infrastructure and platform to showcase this film to a wider audience. I could have never imagined that would happen.”

It wasn’t the first time Rao had seen his work. “Well, I had watched Right Here Right Now (a short film written and directed by Gandhi) earlier and although Ship of Theseus is a far more mature piece of work, one can notice the common factor of good ideas being reflected in his work. That is one thing which is constant—if you watch any of his films, you will know that he is a man with ideas, with concepts.”

Of course, the million-dollar question was if Rao had received any inputs from her famous husband, Aamir Khan. “Yes, soon after I watched the film, we showed it to him and he loved it just as much. He agreed that the film should get a widespread release. He gave a lot of inputs on how we could go about the marketing process and we have incorporated quite a few of them,” she admitted.

Anurag Kashyap, the face of new age Indian cinema, called it, “The most brilliant film to have been made in India in decades. Puts all of us to shame.”

Veteran filmmaker Shyam Benegal deemed it, “A rare film that engages your mind, emotions and senses in equal measure providing the viewer a cinematic experience that is both hugely entertaining and stimulating.”