Home | Culture | High Awareness, Not Many Listeners. But Opus Is Ready To Wait 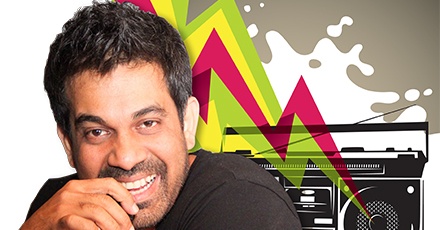 Sharmon Ibrahim, Program Head of MyOpus Radio, speaks to Explocity about Opus, internet radio and what influences his programming.

Internet- and app-penetration in the country are not as deep and wide as in the developed world, but that may well be the opportunity for Opus. Even if internet radio is yet to command a regular listenership, most people we spoke to had instant recall of MyOpus Radio. The early mover advantage is probably priceless for this Bangalore-based internet radio station in this nascent industry.
While private equity players and venture capitalists circle the space looking for an opportunity, creativity is the heart of a music-based radio station.

So, we spoke with Sharmon Ibrahim (former rhythm guitarist for heavy metal band, Millenium). Ibrahim has headed business and programming at MyOpus Radio since its inception and he spoke to us on MyOpus Radio and what drives his decisions, what Bangaloreans listen to and where he expects his efforts will head.

The station was launched in 2009 by Carlton and (late) Gina Braganza, as a brand-extension of the popular Bangalore nightspot, Opus. (www.myopusradio.in).
“We started with one channel. Now we have 14 channels on our site ranging from Jazz to Thrash Metal, International as well as three channels dedicated to India artists and bands,” Ibrahim explained.
Ibrahim explained his choice of programming: Different genres of music cater to all types of people. He said that all their channels have listeners, “some more than other”.

He did not have an in-depth breakdown by channel of their listenership, but he said he had a reasonable idea of which channels listeners preferred. He said that one of their newer channels ‘House Party’ is currently most popular. He said, “It is designed to cater to a party in your house, so anything that makes you move is on that channel.” His assessment was that the channels that played contemporary music got more attention than the others.

Ibrahim’s research team tracks what’s hot and new in music and he listens to a lot of internet radio, Grooveshark being his favourite. For most channels, programming is influenced by what works online.
In addition to catering to popular taste, MyOpus runs three channels dedicated to Indian bands and artists as proof of Opus’ penchant for promoting local talent.
Who listens to MyOpus?

Even if listenership is still growing, Ibrahim said that MyOpus Radio gets about 10,000 listeners per day—a respectable number given the circumstances. And it has its regulars.

Sneha Bennurkar, who works for an online retail company said that the best thing about internet radio is that “someone else picks a playlist for you.” She added, “MyOpus Radio doesn’t run any ads, so it’s uninterrupted music. Something that keeps you occupied.”
Helen Issar, a social media consultant said she listens to MyOpus Radio for 2-3 hours everyday. She “loves the different genres” and echoed Bennurkar’s comment by saying, “There’s very little effort required once you pick a genre.”
Ramprakash, a knowledge-management professional in an IT company said, “Regular radio can’t cater to only one genre, they have to mix it up. MyOpus Radio has a number of channels playing several genres and there are no ads, which is what keeps me hooked to it everyday.”
All three of them agreed on one thing: if 3G services were better, they would be more likely to listen to internet radio even while travelling.

One thing they all said led us to the obvious question about the business end of things: “What? No ads?”
Ibrahim smiled, “Yes. Our station is truly a free offering with no strings attached!”
He explained that the station’s revenue stream was creating custom canned programs for retail outlets to play on their PA systems. These custom channels have their own jingles, RJs, contests, etc. (Whether Opus’ no-ads altruism will continue when there is a meaty, monetisable listener base remains to be seen.)

So, when will internet radio really take off?
Ibrahim said, “Listenership is growing and will continue to grow at least for the next 20 years. Worldwide, FM radio is on the decline while internet radio is rising. When people have connectivity and more importantly awareness, internet radio listenership will overtake FM radio.”
Opus owner Carlton Braganza told Explocity, “Getting bigger listenership requires a huge marketing spend. I am keener on an organic, word-of-mouth growth. The radio station is a great tool we can leverage. Most people listen to radio in their cars. If on-the-go internet connectivity improves in India, we will definitely have a lot more listeners.”

Ibrahim added, “Internet radio in India is still vastly undiscovered, this is a bad thing but also it’s great as the rate of growth that we experience is huge. It will take another 10 years or so for there to be something like 10% awareness I would think, so the only way is up. The future for internet radio is bright!”