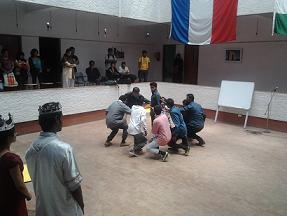 The Alliance Française is a favoured destination for Bangaloreans not only for the pursuit of things French but a whole host of other.

Twenty eight years ago, Vidya Suresh happened to be passing the Indo-French Cultural Association. She had always wanted to learn a foreign language and saw an opportunity. She walked in, liked what she saw, paid her fees and got cracking with the course. She finished it, of course but that’s not the end of the story. Only the beginning.

She is still very much a part of Alliance Française, as it is called today, as a teacher. “You will hear numerous variations of this story with almost every person who walks in here,” says Suresh. “Many register to learn something here and then get hooked. There is something abstract about the place and very addictive,” she adds.

The history of the Alliance Française in Bangalore goes back around four decades and, “contrary to popular belief it is not a French organization, but rather an Indian one,” emphasizes Director, Philippe Gasparini. He explains that, just as with any other country, the idea is always initiated by the work of volunteers who want to share something they have learnt. Often it is the language and the literature. You see a group of like-minded people who coming together, having informal clubs and meetings focussing on various aspects of culture, and gradually more activities are added to it. Finally, when the time is right, a formal application is sent for the logo, which, on the fulfilment of certain criteria is given for free. This is precisely how the Indo-French cultural association in Bangalore became the Alliance Française. “It is a local initiative and not an idea from the French Government and therein lies its beauty,” believes Gasparini.

The French Connection
“With language learning being among the core activities conducted at the Alliance, the Bangalore chapter stands #3 in the country, among all centres in terms of registration for the learning of French,” says Alexandra Dourver, Course Director. She adds that the French language today is one of power and is extensively spoken in Luxembourg, Canada, and Switzerland, and even in a few African countries. Learning the language opens several doors for those looking to go abroad.

As a student of the language once upon a time, and now a teacher of the language, Vidya Suresh finds that the acceptance for the language and the desire to learn it has increased. The top brass of the organization agree that the language is learned primarily to improve prospects of studying abroad, especially in the Francophone countries. These are countries that are also increasingly making a difference in the world of Science and Technology, Aeronautics, Electronics, Telecommunications and more. Learning the language gives students a foothold in all of these arenas.
Something for Everybody

The French culture is about expressing yourself. You will find the Alliance Française has been set up to give you the freedom to think. You will notice that there is no door to the reception area, a symbol of the openness of mind. There is also a large cultural aspect to the offerings at the Alliance. “We try to do things that are non-exclusive,” says Gasparini, “and though we have artistes coming down from Francophone countries, all performances are in English, to allow for a larger segment of society to be included in enjoying them.” The basis of all the programs in rooted in the language, without making it the only focus.

There is a lot that happens at the Alliance Française beside the language classes – efforts are made to bring on a regular basis performers in music, theatre, new age circus and to organize writer conferences, debates and even art exhibitions. These are often brought to the city with related workshops to make them more interactive and beneficial to those attending. Each of the discourses is always focused on introducing something new to promote the language. Efforts are always made to ensure there is never a repeat in the kind of events organized. Equal efforts are made to organize Indian cultural events as well.

Giving people a way to relate better to the cultural offerings of the Alliance Française, Philippe explains how the events are always organized in partnership with related local entities – theatre productions at Rangashankara, film screenings with the Suchitra Film Society, music events along with the Bangalore School of Music and such.

“We are also open to association with upcoming artistes in any field of culture, who need a platform,” says Ketaki Rajwade, Cultural Coordinator at the Alliance. “When evaluating a potential event or workshop, efforts are made to bring in a language influence which can be mutually beneficial.”

For example –recently a calligraphy workshop was conducted at the Alliance, and the knowledge gained here was used in the enhancement of language-based skills. For Independence Day, the Alliance Française screened French films at an event at the Freedom Park. An Indian expert shared his insights on new wave French cinema and its contribution.

Sometimes, several local talents are unable to shine for the lack of space and the Alliance offers them a place to allow for interaction. That is why they have regular classes in Tai Chi, belly dancing, Aikido among other things as well.
“A celebration of the Indo-French is the key,” says Philippe. “All of the programs are open to all ages and to the English-speaking public in general, without any of it aiming at being elitist,” he adds.