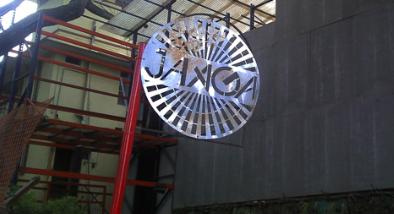 "We’re cool and weird and connected. Modern society has a way of pushing conformity, and places like Jaaga help people re-imagine a world of possibility, and that is why Bangaloreans frequent Jaaga," says Freeman Murray, founder of Jaaga.

A café that serves coffee and sandwiches is nothing new. But there's something about Jaaga that sets it apart from others. For one thing, “Jaaga is a public charitable trust,” explained Archana Prasad, one of the founders.

For another, there are no traditional walls. The entire ‘semi-structure’ is built out of heavy-duty steel shelving components called pallet racks, normally used to store goods in a warehouse. “We use them to create work areas, conference rooms, a game room and an auditorium. And we were able to build a large high-density multi floor temporary building on land we do not own,” says Freeman, the motivational force behind Jaaga.

Prasad explained that, “Jaaga means 'space' in Kannada and 'awakened' in Hindi - so we thought it was perfect given that we support art-tech-activism by providing space and a network of awakened people to share it with.” Murray went on, “Jaaga, provides a very chill, very alternative, very large, very wired place for people to hang out, meet up, work on stuff, learn stuff, eat stuff at Courtyard Café, and generally have a good time.”

Part of the Jaaga culture is that they are semi-nomadic. This means Jaaga moves every few years and the whole building acquires an entirely new location. “We are in our second location in our 4 years of existence,” said Prasad.

Murray explained, “We’ve demonstrated how to take unused pieces of land in the city centre that otherwise just collect trash, and convert them into vital community centres. We’ve also shown how valuable internet-enabled community centres can be to support innovation and entrepreneurship within a community. We provide space for freelancers, designers, coders, start-ups, researchers and anyone interested to spend time productively engaged on an online platform or digital a space.”

Jaaga is a non-profit trust. Guests get the benefit of engaging in a community built up over the years. Jaaga maintains its vitality by inviting interesting people to share their experiences. “Our intent is to demonstrate the viability of such a model such that more communities will step up and create their own. We look at our co-working as a hot-desking model where for a price of Rs 500 per month, people get a desk space, internet and a chair to work from 10 am to 10 pm, seven days a week. So if you are a nomadic worker, a consultant or freelancer in need of a productive environment, an interesting community of like-minded people, Jaaga is your spot,” explained Prasad.

Hot-desking, if you’re not familiar with the term, is an office organization system. It involves multiple workers using a single physical workstation or surface during different time periods.

Both Murray and Prasad were full of gratitude for the well-known, long-time Bangalorean architect and quizzer Naresh Narasimhan. “He was our first staunch supporter. He provided this land, free of charge, for a year and a half, so that we could build Jaaga and develop it to its potential, without being stifled by monetary concerns,” explained Prasad. “I would like to think that we are a magnet for progressive, creative, activated and intelligent people from all walks of life. I think we might be dear to many Bangaloreans - simply for being a non-judgemental open space that differs from the run-of-the-mill commercial, promotional or propagandist spaces that the city seems to be over-run with.”