Jude Felix was captain of the Indian Hockey team from 1993 to 1995. Having represented Indian hockey at the highest, he now coaches under-privileged children at his academy and feels that nothing compares to representing one’s country. 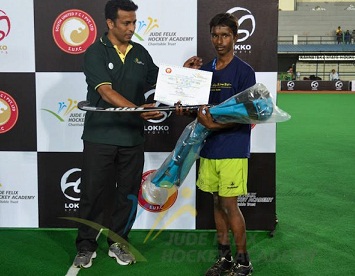 Jude Felix was captain of the Indian Hockey team from 1993 to 1995. Having represented Indian hockey at the highest, he now coaches under-privileged children at his academy and feels that nothing compares to representing one’s country.

He’s played over 250 international hockey matches for India, has been voted one of the seven best international players by the FIH (Federation of International Hockey), was captain of the Indian hockey team from 1993-1995, is an Arjuna award winner, was the member of the FIH athletes’ panel for four years and has played for numerous teams and coached several players across the world. Explocity spoke to Jude Felix, Bangalore’s hockey star who now coaches over a hundred under-privileged children at the Jude Felix Hockey Academy.

Having started playing at the tender age of nine, Felix took to our national game because there was considerable publicity and interest in the sport back then due to India’s performance in the Olympics and World Cups. "Every house in our area had a hockey stick. It was popular and my brothers used to play too. So it was natural for me to get into hockey," Felix explained. He was also into football but managed to draw a lot of attention when he played hockey for his school team, dominating several events and scoring goals. That’s when he realised that he had what it took to pursue playing for India.

Felix began attending several camps – the most important one being the Nehru Hockey Camp, which allowed him to interact with players from across India. He went on to play for the state, the junior level and eventually the national level. "It was a dream come true," Felix reminisced fondly. "It's hard to explain the feeling. We know we are Indian and we take it for granted, but when you get to represent your country at the international level, see the flag unfurl, hear the national anthem on the public address system, it moves you and inspires you."

During the course of our discussion, people kept walking up to Felix, exchanging a few words, and he was warm and friendly with everyone, even excusing himself to allow a fan the chance to take a picture with him.
Playing an international sport comes with obvious attention. How did it change him?

"The attention and recognition comes, but not to the level of cricket players and I must add the word 'thankfully' here. The muted attention suited me fine, so it didn't get to my head. I still keep in touch with my school mates and old friends," he said smiling.

Indian hockey doesn't enjoy the dominating status it once had. According to Felix, "There is politics, improper administration and lack of proper training equipment and facilities here. We barely have 50-75 hockey turfs in India, as opposed to over a thousand in a smaller country like Holland." Felix added that hockey is not a money-spinning sport and he had to go abroad for financial stability. He played for the Singapore Recreational Club as a player-coach and led them to victory in the prestigious Malaysian Johore Bahru league apart from several other victories. Felix also played for the Racing Hockey Club in France, the hockey program of Lyon and the Indian Gymkhana in London. "The experience was amazing. I got to interact with so many international players, play under various weather conditions, travel a lot and also experience top quality turf, training equipment and facilities."

The Jude Felix Hockey Academy
Felix always wanted to train young children in hockey, especially under-privileged children. He approached the St. Mary's orphanage in Cooke Town and got the chance to train the children there. "We started with around 30-40 children and today we have over a hundred. We’re going to add another 80 children in the near future."

Does he see future Indian nationals in the children he trains? "These are kids who have several disadvantages. They have physical roadblocks and they work very hard to avoid letting any of that affect them. I don’t focus on whether they will make it to the national team or not. I just want them to play the game and give it their best. I would like to add that two of our children have made it to the state level."

"How does the Jude Felix Hockey Academy (JFHA) generate funds?" we asked. "We don’t have regular sponsors. Sometimes our events are sponsored, but that’s about it. Most of the functioning is thanks to the donations from our friends and well wishers. We have some great volunteers including hockey stars like Sabu Varkey, Bipin Fernandes, Dayalan, etc., and all of them pitch in to help the academy,” Felix said, adding, "If any of Explocity's readers wish to view how to academy functions or would like to help the JFHA, they can visit our website www.jfha.in and see how they can contribute."

The JFHA takes most of Felix’s time, but whenever he has some time to spare, he spends it with his kids. A fan of Thai food, Felix feels there are very few options for authentic Thai food in Bangalore and so he doesn't mind eating anywhere. Felix used to be a frequent pub-crawler. "Apart from the weather, I love Bangalore for its pubs. My favourite was Pub World. But ironically, I haven’t been to a single pub in years," he signs off.

A Ray Of Hope - Cooke Town Resident Payal Satish’s Daily Update On Available Hospital Beds In Bangalore
Would you like to submit your article to us or write for us? Click here and tell us about yourself.