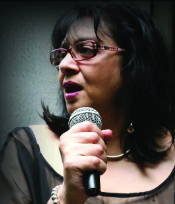 Radha Thomas establishes, "The influence of Dhrupad is inextricable from the jazz, blues and other types of music I sing. It’s who I am. As Indians, with the sort of multicultural heritage and upbringing we receive, I believe it’s inevitable that I’m not one thing or another, but rather, a little of everything."

Radha Thomas is jazz and blues singer who is a trained Dhrupad (Indian classical vocal) vocalist, an author, a mother and VP of a media company. She studied with Ustad Farid Ud Din Dagar and the late Sheila Dhar. She has performed all over the world.

Her unique crossover style is unusual and stands out. She is considered to be one of the foremost jazz vocalists in India. Having lived in New York for twenty years, she performed extensively there with musicians such as Ryo Kawasaki, Frank Tusa, John Scofield, Michael Brecker, Alex Blake, Badal Roy, Buddy Williams, Joe Farrell and others.

Her band, UNK: The Radha Thomas Ensemble, has been gaining quite a bit of attraction in the past few years, performing all over India. The band got together in 2010, playing jazz standards often with an Indian twist.
Of late, their original tunes have been generating a quite a buzz, many of which were penned by Thomas.

Thomas says her music is not ‘Fusion.’ She says, “It’s an intellectual approach towards blending different cultures. Besides jazz and the blues, there are Latin influences, African influences, contemporary hip-hop and other influences… and it could end up being a mess unless you plan things deliberately,” she says smiling.

The following reviews vouch for her growing popularity.

“I’m highly recommending the Radha Thomas Ensemble and giving them 5 Stars for having a fresher sound for the jazz fans who are seeking to expand their horizons. Listeners will be impressed with their approach to jazz classics like Bluesette, Almost Like Being In Love, and Watermelon Man. This is a refreshingly innovative jazz album.”

“The peppy Latin number Menina Moca, also features extended sax solos, shows Thomas’ virtuosity not only as a singer but also as a lyricist. ” - Time Out
“Her favourite kind of music is jazz and her favourite form of experimentation is combining the tonal complexities of jazz with the rhythmic nuances of Indian classical music.”

A little bit about her band. UNK: The Radha Thomas Ensemble, is a manifestation of Thomas’ vision. She tells us, “The band represents every thought, every musical idea, every dream I’ve dreamed musically. I am blessed to able to work with Matt, Jeo, Mishko, Ramjee and closest to my heart, Aman – he lives around the corner, you see,” she says.

Matt Littlewood, Mishko M’ba, Jeoraj George, Aman Mahajan and Ramjee Chandran are variously from India, the USA, England and France. Individually, they have performed all over the world. It is India’s first such format, led by a vocalist and UNK is now one of India’s most sought-after live music bands in the genre.

Their first album ‘I Only Have Eyes For You’ was released in September 2012 and is being played in radio stations all over the world including over 100 stations in the USA, to great acclaim from both critics and the public alike.

They have also performed repeatedly in India’s finest clubs such as Shisha, BFlat, Take Five, Zorba, The Sol, Out of The Box, Blue Frog, Paparazzi, Opus and others.

UNK does not lend itself easily to a convenient genre or label but the music is definitively jazz in terms of the melodic and harmonic richness. The influences are subtly Indian but we would not go the distance of labelling it ‘fusion’.

The experience of the various band members is evident in the sleek arrangements and intelligent solos once can hear. 2013 – 2014 promises to be very busy for the band with a second album in the works and much more touring lined up.

How did music start for you?
I was born into a world of music, I suppose. There has always been music around me. My mother was always singing or playing records. If I remember correctly, I got a guitar when I was about twelve. So my world’s always been filled with music.

It’s been a long and winding road, we’re sure. So, how have things changed from then and now?
I didn’t know much about the ‘scene’ back then. I was just about sixteen or seventeen when I joined India’s foremost rock-and-roll band, Human Bondage. All I knew was, we played gigs every night in some fantastic clubs all around the country, and people packed the places every night. I guess the scene was focussed on the clubs because we didn’t have the internet. So, it was a good thing.

There’s no comparison between then and now. People were imprisoned in an analog world where live music meant everything. It’s not the case today. So it’s much harder to be successful today.

The first album is doing relatively well, and we hear you're working on a second. What can listeners expect from it?
A lot more original material. Many songs that I’ve written and a few from Aman Mahajan. The songs are ready for the second album, but we want to play them live many times before we hit the studio. Experimenting in the studio takes up a lot of time and is expensive.

We learned that you're planning something big... global rather. Apart from UNK, what else do you have up your sleeves, musically?
You heard right. There’s this new project I’m working on. It’s called NY International. It features Tony Cimorosi (bass, USA), Frank Colon (percussion, Brazil), Koko Bermejo (drums, Philippines) and Aman Mahajan (Keys, India) and I.

Our music has been done exclusively through online interaction. Except for Aman and me, we are yet to meet each other face-to-face. Here again, most of the songs are almost cooked. Tony Cimorosi is my inspiration here. He is a brilliant musician and educator and his songs… well, maybe he wrote them before he met me, but I could swear they are written just for me!

We’re in the middle of recording our first album and we hope to tour as soon as the album is done.

Do you think the Indian media has any influence on the way people listen to music?
I don’t think the media has all that much influence over taste. However, getting media attention can only help getting the word out. But eventually, thanks to the digital universe we live in, everyone has an equal shot. Public opinion is where it’s at.

Do you perform often?
She finishes off by telling us, “As a jazz musician, it’s difficult to get gigs. So when we do, I am delighted. So is my band. We don’t get paid much money, but we love what we do. You can catch us playing at B Flat (September 13), Take Five (October 18) in Bangalore and hopefully lots of other places in the months to come.”