Home | Bangalore | Culture | Review: How To Skin A Giraffe

Review: How To Skin A Giraffe 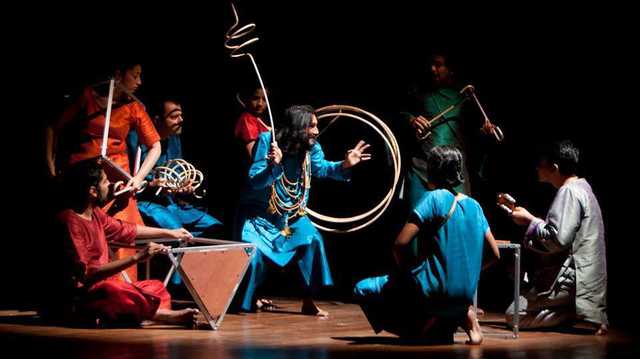 Hyperbole defines social relationships. That’s what the viewer, who has participated in the comic struggle between the way the world should be and is, takes back from the play ‘How to Skin a Giraffe’ days after the performance. But, just how can the mundane be so off the mark from realism? Almost two centuries down the line, Georg Büchner’s Leonce und Lena, converge into Popo and Pipi, son and daughter of a monarch and business conglomerate respectively, who, presumably oblivious to exaggerated emotions that define life, connect in seamlessness abandonment with what the real world perceives as mundane. So they bay the moon, hobnob with fools and live in self created paradise, with neither norms nor social shackles to bind them.

Unbinding the story from its roots, in the 200the year celebrations of Buchner, the Goethe Institute/Max Mueller Bhavan, Chennai, roped in the theatre group Perch, which has collaborated with Rafiki Bangalore, to arrive at a haute interpretation of the master’s works. And a multi-lingual script, bound by emotions and expressions intrinsic to local communities, free of geographical definition emerged. “In doing so, our mission to popularise German theatre in Bangalore has been very fruitful,” says Maureen Gonsalves, programme co-ordinator, Goethe Institut/Max Mueller Bhavan, Bangalore, adding, “Although bringing a down a German theatre group elicits “wows” among connoisseurs, integrating into the local culture creates a lasting impression.”

Synchronous with local traditions, the stage adapted itself into a platform definitive of “sabha nadagams” as construed by the director of How to Skin... Rajiv Krishnan. The intent of letting out wholesome personal expressions, permeating into the skin of the audience to create hyperbole, was executed with panache especially by Valerio (Vaal) played by Ravindra Vijay, who wore the satire on his collar. Equalling his outrageous rendition of letting it all hang out in the context of expressions without restrain, Bindumalini Narayanaswamy who played Ammai – Pipi’s governess,  made a tuneful mark with her anecdotes and soulful singing.

In tune with the lyrical appeal of the play, musicians Anushka Meenakshi and Vedanth Bharadwaj took centre stage to add to the character of the play. Bells, cymbals, didgeridoo, mandolin, recorder, harmonica and ukulele among a host string and wind instruments, rendered emotion to Popo’s monologue, as they did to the “faceless” multitudes. Interestingly, the director chose to keep them in central position through the duration of the act.

The final act is in many ways a visual treat, abundant in the costumes and dexterous props, which, by a small twist were fit for peasant and royalty alike. “I created a visual structure first – that’s how I always work,” says Rajiv, adding, “In fact, through the six weeks of our practice, we first created and defined visual frames. Then, it’s left to the actor to use these props to his or her imagination.”

In doing so, the stage became a medium of expression exuding inclusivity and bringing to fore the art of contemplation in public. What helped the case was that languages flowed in continuum, between English, Tamil, Malayalam, Kannada, Hindi and Nepali.
Rajiv has been conscious of letting actors speak in a language they are comfortable in. “I am very curious to see how various languages interact on stage. At the same time, I try and ensure that the story is understood by those who don’t speak that language, although some minute cultural nuances, pertaining to a certain dialect might escape them,” he explains.

What didn’t escape the eye was Amjad Prawej’s canine countenance, internalised to the bone and the wag. Movements between wordless pauses and transitions of moods came with ease, as they did while the actors paused for dialogue. “It’s the result of two workshops we underwent these past few weeks – one by Heisnam Tomba, who heads Kalakshetra in Manipur and the other, on the use of masks by a Mumbai-based artist Yuki Ellias,” says Rajiv, adding, “These workshops also enabled the actors to look at their work in different ways.”

The evolution of the script, between the original, which was very poetic and Shakespearean – that’s who Buchner draws his inspiration from – and its later adaptation, involved writing lines, by thinking in the actors’ respective languages. “In the end, we stuck close to the original – which has a fable-like appeal, than with the adaptation, which seemed meek in comparison,” explains Rajiv.

So, strong and meek renditions – as in the case of Ammai – who made a remarkable impact and Pipi played by Rency Philip, who, often seemed to merge with the setting than make an impactful presence, emerged. Alongside, poignant hyperbolic connections found resonance in the real world characters through Sachin Gurjale who played the monarch, Ashiqa Salvan the queen of the Crab Empire, her aide Anandsami and Karuna Amarnath -- the lady who took the stage by storm as the madam of the dating agency and Ishwar Srikumar who played Popo.

Poignant to the point when ultimately, Popo meaning bum in German and Pipi meaning urine, are united by marriage, all the stage turned chaotic in congruence with how Buchner would have it. A risk well taken Rajiv!