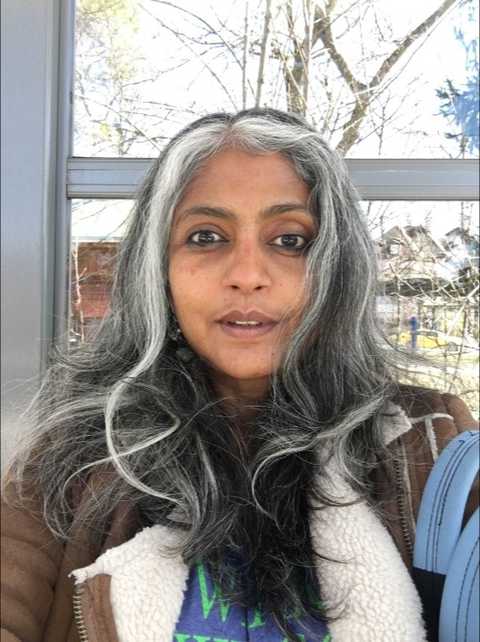 Kirtana Kumar is an actor, director, film-maker, dramaturg and writer, is all.

Salmin Sheriff is a playwright, actor, artist and a quintessential Bangalorean.

His art was on display most recently—22nd and 23rd of October, 2021—in an exhibition of his work at the Bangalore International Centre. The exhibition attracted an audience, not merely because Sheriff is known to theatre and art buffs, but also because it was a welcome event after the successive lockdowns had left all Bangaloreans in a cultural drought.

Merely writing about Sheriff’s exhibition of paintings was less important to us that setting his work in context—that of being a talented and intellectual Bangalorean.

So we invited another Bangalorean super-talent, Kirtana Kumar  to write about him...as artist, actor and yes, quintessential Bangalorean.

In her essay, Kirtana Kumar lays out an evocative picture about longtime friend and associate, Salmin Sheriff.

Artistic journeys, like a caravanserai moving through Time, are a thing of wonder. The many ways the human soul, unafraid, seeks to express interiority. I have known Salmin Sheriff, aka Sal, as actor, playwright, poet and speak to him today as a painter. A complete Bangalore boy (tick Christ College, Yezdi and Day Parties) he actually grew up in Panchgani. “Our art teacher would take us out to paint the spectacular sunsets every other day. We had geometric art sessions, where we filled up squares, triangles, rectangles and circles with a plethora of colours which was very exciting for a child.” 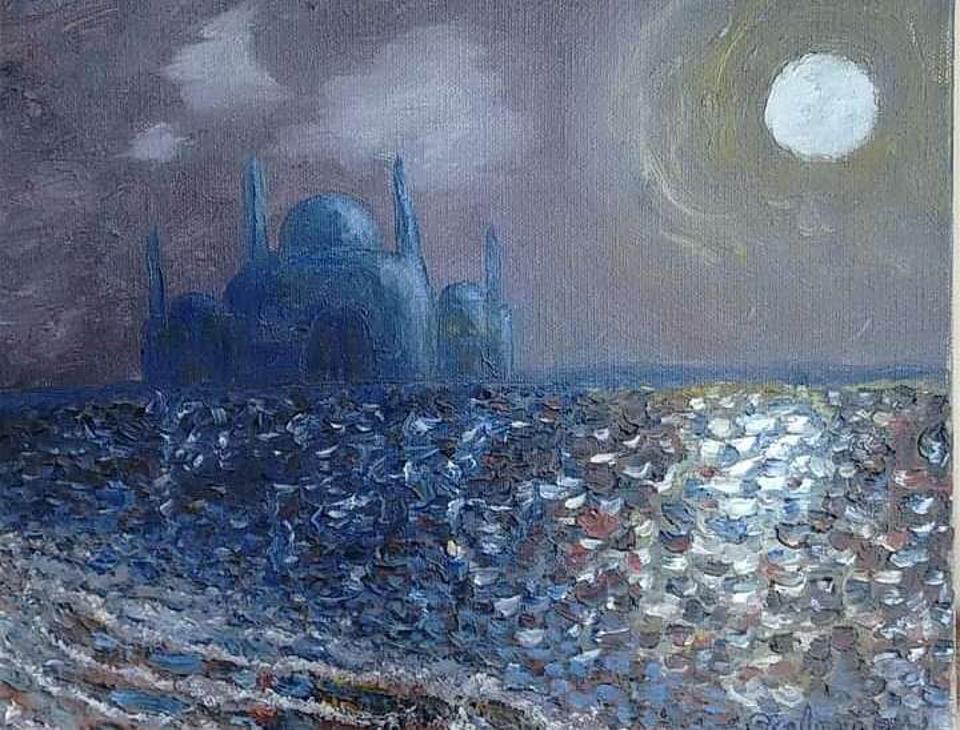 I first met with Sal’s paintings soon after my production of The Retreating World/Last Tuesday. He had, most exquisitely, played the lead in this play. Shortly after we returned from Imphal, performing at the Khundongbam Brojendro Theatre Festival, Sal sent me a picture of a painting in shadowy cerulean. I saw a tremulous hand; emotional, sensitive. The back of a figure balancing a tome on her head. I saw a bird. I was stunned. I asked him about this particular work. He said “The play had a huge impact on me emotionally. Besides doing the dramaturgy for it, I was playing an Iraqi youth torn by the war. Some of the scenes devastated me and I needed the catharsis of painting. But there was also hope in the story. For me, painting scenes from the play was therapeutic.”

After this, his oils on canvas started to trickle in, the amethyst, rosé and blue flying off the canvas as if to smack you with a daub of empathy. A girl on the metro, azure skinned with a hot pink flower behind her ear, her stomach bare. People watching her unafraid stance. A woman supine, against an urban landscape rendered magical and somewhat Spanish by their vivid colours. Owls looking on, little spots of vanished wisdom. A group of women by a river, their saris tied in the way of the Halakki, fowl, a child with a dog, the skies magenta. A yearning for the flowers that cover the banks. Is it indeed a river? Is it the Dead Sea? “I love colours. At first glance, they attract you. Once the viewer is engaged, they begin to read and analyse the painting.” 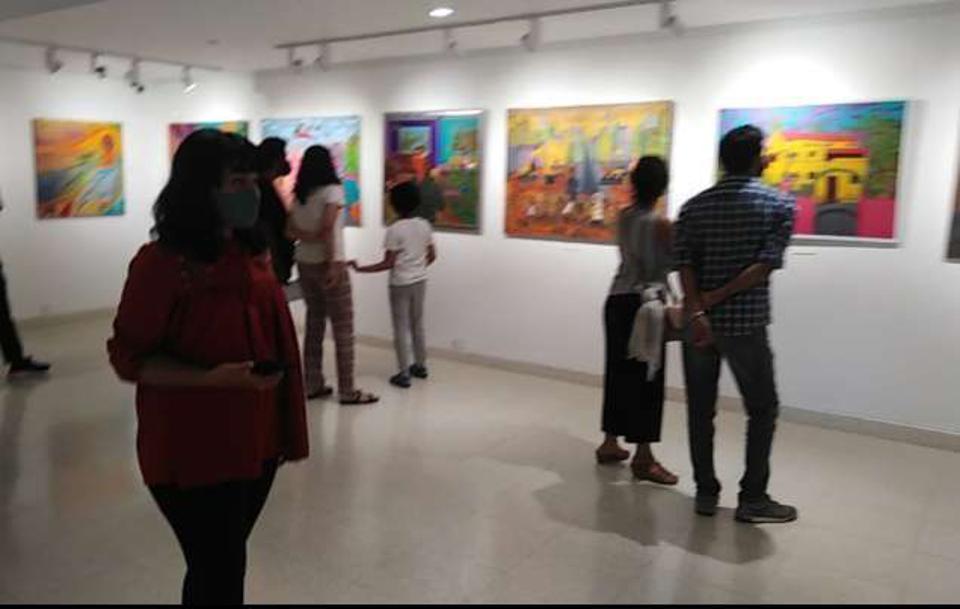 Then came the pandemic and Sal’s output became abundant. “Our right of choice and movement were taken away, we were all confined indoors. I am an extrovert, I was going crazy sitting at home. But, I also had time to reflect. It was an opportunity and I started translating everything to canvas. There was so much happening, socio-politically. Migrant workers from other states who were let down by the system, the various citizens protests, so many peaceful activists being jailed.”

There is something of the miniature or Persian art in Sal's work. The detailing of the background, almost like the human figures are set within a woven tapestry of repeated symbols. Portraiture of animals, birds and flowers frame the narrative. Then, the idealisation of the feminine. I asked him about this. “Everything about "Mankind" is patriarchal. Be it any ideology, religion or society. Women have always been denied their rights. Some of these stories are of people I know. Each painting is an individual story of hope. Also, as a privileged cis male, I am guilty of not being fair to women in the past. There's a bit of that guilt too in my paintings.” 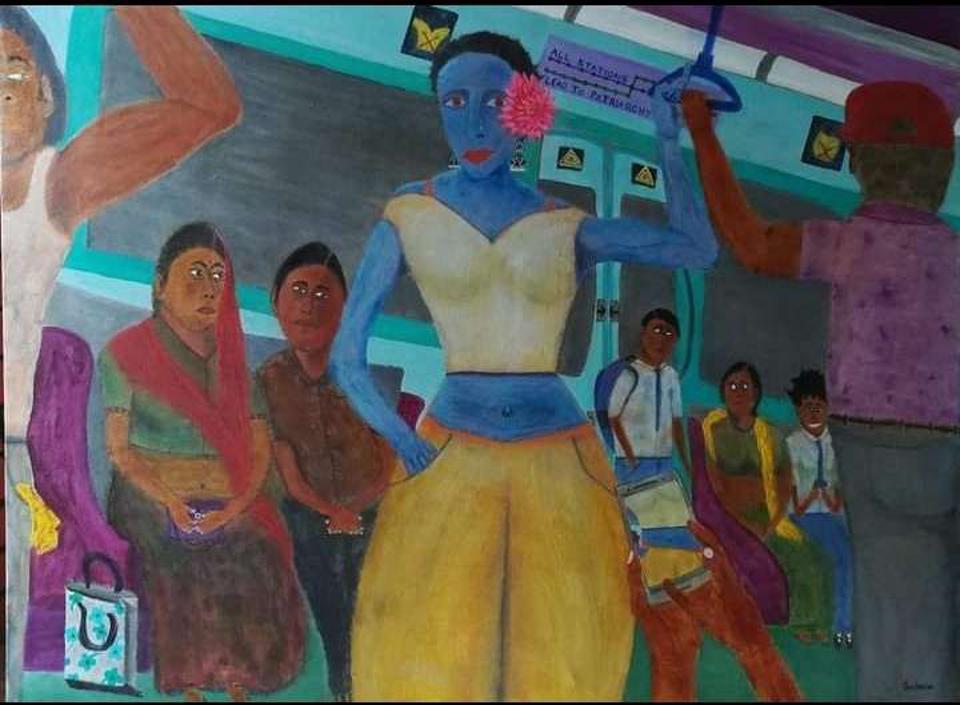 Finally, I asked about his emerging style. The large, articulated figures against a guileless urban scape. The text on a man’s garment that references the most expensive suit ever auctioned. The hijabs alongside the bare heads. The nude, absorbed by text, worshipped by prostrate man. The visual semiotics of his choice of colour, the masked messages, the birds. “My influences are many. But, I had to develop my own style.  If I have to name a single influence, my hero is Artemisia Gentileschi.”

In this way, the caravanserai of Sal’s artistic journey moves on. When everything seemed to have shut down during the pandemic, two evenings at Bangalore International Centre, a hubbub of wild hue and conversation. Sal’s exhibition of his work.

In its intention quite sublime

leaving footprints on the sands of time.