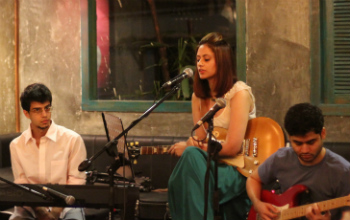 The Prose is an up and coming three piece band consisting of Ridhii Paul on vocals, Viraaj Arora on keyboard and Neil Arora on guitar. The band covers jazz, blues and pop, but gives it a twist.

Bangalore loves its young bands and if the word on a new band is good, you can expect to see an appreciative audience. The Prose is one such band. These new kids on the block are progressing, slowly, but steadily.

The band played their first gig less than a year ago, making them relatively new. Having started with gigs at venues such as Muse, Urban Solace and Green Theory, The Prose is hungry for new places to display their laid back and sophisticated sound. Neil Arora says, "The band is ready to take on the same challenges that lie ahead for any starting musician."

Paul is a graphic designer while Neil Arora runs a web design agency, and Viraaj Arora, a student, teaches piano at the I Love Music Academy (better known as ILM), on weekends.

Neil Arora tells us, “The three of us enjoy listening to jazz and blues of various styles - from Ella Fitzgerald and Nina Simone to BB King and Eric Clapton. We try to incorporate these influences into our performances and throw in some popular numbers to get the crowd moving.” The Prose displays a repertoire that is diverse. The band covers songs such as I Wanna Hold Your Hand by The Beatles, Zombie by The Cranberries and Lights by Ellie Goulding, among others.

But they don’t just play covers. They take songs that have made history, the chartbusters that ruled the world, and spin them around in their quirky style to bring out something innovative. Audiences seem to like this sort of teasing.
“I feel that Bangalore bands are slightly limited by the expectations of the audience to listen to something familiar. Hence, the songs that many Bangalore-based band play that are original, is relatively small. We try to overcome this hurdle by applying our own twist to a familiar song,” says Neil Arora.

Paul adds, “Singing or playing something in exactly the same way is not only boring, it isn’t original. As an artist, you only seek to deliver, to an audience, music that portrays the identity and the essence singer or the musician. So, performing a song in a style of our own speaks of who we are as artists. I find that more interesting and important when we cover a song.”

How did Prose come about as a trio? The band tells us that the original plan was for the two cousins (Viraj Arora and Neil Arora) to form a band. But Paul happened to meet the former at her guitar school. The trio started jamming and the result was The Prose.

Viraj Arora mentions, “We initially started off with the idea of forming a duo, my cousin Neil and I, but felt the need for an additional member and, to our luck, we met Paul.”

Pauls adds, “I moved back to India two years ago. Not knowing any musicians in the city, I decided to take up guitar lessons. Fortunately, I met Viraj Arora at my guitar school. He is the piano teacher there. We soon started jamming.  He would  often mention of his cool cousin who plays guitar, and wanted to jam too. Eventually, I did meet him (Neil Arora), and we’ve been a band ever since.”

What about the name of the band, we asked. Viraj Arora explains, “We wanted a name that conveyed sophistication to match our style, and was succinct. After going through various names, we settled on The Prose.”

Reinventing songs has been done. So, what's special about the way the band does it? Neil Arora says, “A lot of bands tend to directly attempt to reproduce or replicate a song, as people know them. Whereas, we aim to keep listeners intrigued and on their toes by re-imagining the song in light of different genres.”

Paul explains further, “Our different take on popular covers is what makes us unique.”

Recently, The Prose took part in the #YouForUttarakhand initiative. After the devastating floods in Uttarakhand, Paul, along with her sisters and Rohan Malik, the owner of Muse, organised the #YouForUttarakhand concert on July 7, at Muse. The Prose, among other bands, strongly believed in the cause. Paul tells us, “ It was an amazing experience. We were able to raise a lakh towards the cause.”

Asking the band about the response they get from the Bangalore crowd, Neil Arora tells us, “The response has been very positive. People at our shows love our unique interpretations of popular songs.”

The band is yet to come out with an album. Paul says, “We have number of originals compositions. For now, it’s all about reinventing classic numbers. As for the experience, you'd have to come to our gigs to find out.”

The Prose has been around for just less than a year, and the band seems to be on the right track, making all the right noises. They are playing across the city, leaving their mark and adding to their growing fan base.