They're Killing The Nightlife Because Most Bangaloreans Want Them To

So no matter how Magna Carta-esque and broad-minded the law might be in spirit and intent, its implementation can only follow the narrower dictates of the society it serves. 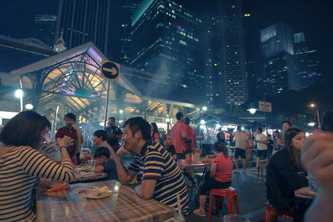 We criticize the government for shutting nightlife down before midnight.

We're pissed off at the cops for inflicting the law - often in a crude and abhorrent manner - on us Bangaloreans, who are probably the least bellicose of social drinkers in all of India.

And no matter how often we say that all this is not becoming of an international city—and we play guitars on MG Road in rebellion—things don’t seem to be going anywhere.

But there’s something befuddling about it all.

We all know there is an Excise law that regulates bar timings and dictates who can and cannot be employed by one. We know that the Excise department has outsourced its enforcement to the police. Many will agree that this law ought to be struck down as unconstitutional and sent back to the Vidhana Soudha – hopefully into legislative oblivion.

But the question is whom does this law serve to protect?

Why isn’t there an unambiguous ban on live entertainment – in the same way there are no movie theatres in Saudi?

Why is the law being enforced with such on-again, off-again whimsy?

Why isn’t their heart in it?

In the late 90s, (then) High Court Justice Michael Saldanha told me he would probably strike down the law and send it back to legislature if say, a PIL against this law came up before him.

Breathless and babbling, I ran around town trying to get pub owners interested in filing something before the High Court, but to my surprise no one wanted to bite. They preferred a state of flux to a clear-cut law. They told me that the cops could nail them on some trumped up niggle; and so they preferred to leave things be rather than risk the vindictiveness of the Bangalore Police.

Why would the cops be vindictive about something as benign as a bunch of musicians performing in a nightclub?

(I will agree that some musicians might cause a public riot through ineptitude but—to paraphrase VS Naipaul’s comment on Khomeini’s fatwa against Rushdie—to subject a singer and guitar player to police custody is an extreme form of musical critique.)

The government gets revenue from licences, tax from sales of alcohol and income from so many other sources surrounding the business of entertainment.

So why stop the music?

Then one afternoon, I – shamelessly and wilfully – overheard a conversation between two gentlemen who, I learned later, were public works contractors. City toughies.

Just that morning there had been some rumpus in the local press about a few nightclubs being raided. Debate ensued.

“Why can’t we learn good things from the west?” one of them thundered to his buddy, “why only all this dancing and dangling by these booze masters?!”

I understood neither “dangling” nor “booze master” but I listened captivated as his friend thundered back in agreement.

As they thundered in unison, I waded timidly into their discussion.

First establishing that they were not about to stick their forks in my eye, I asked them what their problem was. Why were they against some poor sod with a harmonium, singing ghazals to a group of people who were enjoying their drink and dinner?

That stopped their thundering briefly.

They had been thinking only of a latter day Pam Crain singing “Lush Life” to a crowd of “booze masters”. They had not considered that the law might extend to ethnic locales.

One of them said to me that ghazals were fine. They explained that they were not against alcohol, not against music or dance but they did not like these “exclusive” places like “western music live band joints” corrupting “our Indian culture”. “We will even accept the mujras,” they told me, “but where is the need for ‘disco mania’”?

They said establishments that played Indian music were either family places or places where ‘decent’ women would not go. “Not like western places where wives, daughters and ‘even’ daughters-in-law can be found ‘dancing and dangling’ with other men,” they spat.

And then, it all fell into place.

I realised that the law is only a mirror that reflects the will of society.

So no matter how Magna Carta-esque and broad-minded the law might be in spirit and intent, its implementation can only follow the narrower dictates of the society it serves. (For example, while it is not against the constitution to manufacture and distribute booze, Ahmedabad is dry.)

In any democracy, the law evolves through interpretation and expediency. The evolution of the law in Bangalore has merely followed the increasing indigenisation of our society.

As the centres of power move to people who are uncomfortable with the western idiom, those who interpret and enforce the rules—like the cops—will do so in favour of the influential majority. It happens naturally.

But because there isn’t enough rationale to completely ban expressions of western culture, (and because there are too many of us English-speaking Indians in places that matter), western culture will be “allowed” to co-exist, but in an increasingly non-congenial environment.

Changing social mores have long started to interfere with culture – what with an MF Husain “might have been allowed” to paint; or whether a Radha Thomas “will be allowed” to sing jazz at a nightclub.

Guess it means we can now stop blaming the government and the cops.

Bars close early because most Bangaloreans want it that way. The nightlife laws merely reflect the social dictates of the larger ethnicity among Bangaloreans.