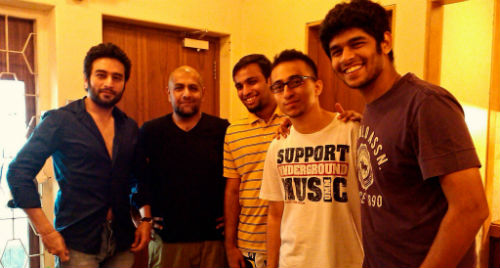 "We were pleasantly surprised to see Shahrukh Khan walking into the studio. Hearing him praise the song and what we had created… it was priceless."

Superstars Shahrukh Khan and Deepika Padukone will soon be seen grooving to some funky tunes created by Bangalore boys. We’re talking about the track ‘Ready, Steady, Po’ from the hugely awaited Bollywood film – Chennai Express. The track has been composed by Bangalore based, rap/ hip-hop group calling themselves Machas with Attitude (MWA) for the popular music director duo Vishal-Shekhar. The song, in collaboration with Vishal Dadlani and Natalie Di Luccio, has received rave reviews as one of the best tracks in the film.

MWA aims to bring rap and hip-hop in India to the forefront by adding some of their own touches and flavour to their tracks. Although sung primarily in English, these guys incorporate their own cultural influences and backgrounds in their songs that usually feature lyrics in Hindi, Tamil, Telugu and Malayalam. The music reflects a blend of emotions: patriotism and aggression with a dash of humour. And so far, it’s worked brilliantly for them. With a number of songs in various regional films to their credit, the Machas took rap music to Bollywood first with their track 'Dheaon Dheaon' from Mujhse Fraaandship Karoge – a film produced by Yashraj Films.

We spoke with MWA about their journey as a group and what they feel about the rap / hip-hop genre in India. They share experiences creating the track for Chennai Express, the recording session with Vishal-Shekhar and meeting Shahrukh Khan.

Q: Machas With Attitude. The how and when?

It’s been six years now but we really got into it around 2008. Initially, we didn’t think we'll be into this full time but when the apples are red, you better pluck 'em. We wanted to bring Indian hip-hop to the forefront and that’s what we are doing.

Q: How did you board the Chennai Express?

We won the Best Hip Hop Artist award at the Radio City Freedom Awards (for the track, Indian Flava). Prior to that, we wanted to meet Vishal and Shekhar. Call it destiny but to our surprise it was Vishal who was giving away the award. He invited us over to his studio and it was mayhem after that. Absolute mayhem.

It was a lot of fun. More than anything, we learnt a lot. Vishal-Shekhar are really open to the creative process. They made us feel comfortable. As we were recording, we were pleasantly surprised to see Shahrukh Khan walking into the studio. It was fun to hear him speak about his Bangalore connection (from his earlier visits). Hearing him praise the song and what we had created… it was priceless.

Q: How do you plan to capitalize this move?

The move capitalizes us.

The plan is to drive and promote most of our singles through this opportunity. Thanks to the large scale and wide reach of the film, collaborations are much easier. A lot of people would usually never collaborate with hip-hop bands but I think we are slowly changing that. Hip-hop is a lot more than sex, drugs and money. With this Chennai Express opportunity, we plan to take over the industry. I know we’re being ambitious but that’s the way we have done things and that’s the way we will continue to do it. We also plan to interact more with our fans and that calls for better music, on a bigger scale, which is going to happen. Huge announcements soon.

Q: What do you think about the current Bollywood music scene?

There is nothing wrong with music that is made for a certain audience, for people who you know are going to like and appreciate it. Bollywood is one such example. Vishal-Shekhar themselves have composed so many awesome Bollywood songs. It was our dream to work with them. So, its great if the dream comes true, irrespective of the industry we do it in.

Q: What does your music primarily reflect?

Q: Has being in Bangalore helped at all?

To be honest, Bangalore has definitely helped but not much. The hip-hop scene in Bangalore is not that active. People don’t want to listen to an artist rap. They prefer listening to Djs spin numbers they already know. . I love Bangalore and the way it has treated us but I’m sure many artists will agree. The rap / hip-hop scene has gone down.

Q: Where do you think India stands with regards to rap / hip hop?

I think it’s in a good place. More people are listening and appreciating it now. There are hip hoppers who are contributing to the game. Its getting interesting and I think Indian hip-hop is not far away from going global. You will see us doing it.

Q: What was the turning point in your band’s career?

When we decided that we would stick to creating music professionally. That was the hardest part. But it’s been a beautiful journey and it’s given us a great deal of happiness. But there is more to come, more places to go, more people to rock.