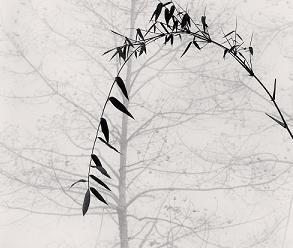 The air is intense with escapades into Eastern landscapes ranging from Yunnan to Kerala, bringing to fore the enigma of trees, locations and places, Michael Kenna loves to be in...

Drawn by the intensity of this world renowned English photographer’s shutterbug, last week, Bangaloreans, acquainted themselves with Kenna’s simple portrayal of complex ideas at the ongoing show of his works at Tasveer.
While renowned educationist and industrialist M.K. Panduranga Shetty enjoyed seeing Kenna’s pictures and found them to have rare appeal, designer Manoviraj Khosla found them inspiring and deep.

Curator of the show, Nathaniel Gaskell feels that the response to Kenna’s photographs has been good because his works have universal pull. "They suck you in and you can't help but be entranced by their minimalist perfection and subtle tones. Many people at the opening reported this as being one of their favourite Tasveer shows in recent years, and I think it's the undeniable quality of the work that caused this response,” he says, adding, "Kenna has a reputation as one of the best black and white traditional printers, and his photographs are exquisite objects that have to be seen to be believed."

Seeing Kenna’s pictures, healthcare professional Mridula Shankar points out that the photographer’s virtuosity is immediately apparent in his technically precise and visually awe-inspiring, black and white compositions. “The unusual angles, his play with texture and the brilliant use of natural lighting leaves the viewer quite spell bound," she observes.

A walk through the expanse of connections, which Kenna has been drawn to over the years, 48 black and white photographs, on exhibit at Tasveer are part of an ongoing project, highlighting the photographer’s ‘passion, almost addiction or love affair’ with the land he likes and the connections that take him from one time in his life to another and back again. Connecting to this vein, as an introduction to his works read: ‘These photographs explore the relationship, juxtaposition, and interaction between the landscape and the structures that humans leave on the landscape. They are complex in their simplicity, inviting the viewer to use their imagination, to create their own stories and dramas.  Kenna often uses the analogy of the theatre when describing his work, ‘before the start of a play, when the stage is clear of actors, there is an atmosphere of anticipation. Without narrative our imaginations are free to wander and again, after the performance, only the memory of the story lingers’.

In bringing Kenna’s series titled A Journey Through Asia, in partnership with Vacheron Constantin and arttd’inox, Nathaniel believes that the time is ripe for this visual vacation in Bangalore. “Kenna's photographs are timeless and have a universal appeal, so I think any time would have been the right time to bring them to Bangalore,” he says, adding, “However, the increase in people interested in fine art photography in the city in the last few years, coupled with the fact that many of these images are new additions to Kenna's oeuvre from India, make now a particularly relevant time to show his work here.”

In tune with the “nowness” of Kenna’s images, fashion industry professional Nirmala Ramakrishnan finds Kenna’s works unforgettable and refreshing, while Nathaniel observes some of the facets of interest, which he has seen evolving over time among Indian connoisseurs of photography. “Collectors here are interested in work they can relate to and know is of a certain quality; work that will hold its value as well as compliment their existing collections,” he explains.

In fact, adding sensitivity to Abhishek Poddar’s vision for Tasveer and the pertinence of photographs among Bangalore’s art fraternity over the years, Nathaniel talks of how, calibre selections are a combination of lesser and better known works from an artist’s portfolio. “Kenna has been making photographs in Asia for decades, and so has a huge portfolio. Our criteria was to select a combination of lesser known works (such as those from India), alongside some of his more classic and iconic images (such as those from Japan), whilst all the while focusing on this idea of taking a viewer on a journey across the landscapes on Asia,” he explains.

In translation, these images are one with Rani Urmila Devi’s lingering connection with the intense landscapes defined by the photographer’s frames. For, as Kenna says: “I don’t need or desire instant gratification in photography and it is the long, slow journey to the final print that captivates me.”