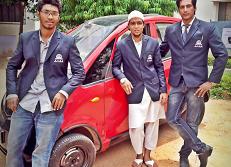 Sanu Rahman, Syed Arif Ullah and Syed Zeeshan K, all students at the H.K.B.K College Of Engineering, have invented something new and unique.

They call it a car.

As part of their final year college project, these 22-year-olds are the proud designers of a prototype car called SAZ (an acronym for their first names) that has a 150cc two-stroke engine. That not enough juice to be of any real use to the public.

So with the basics in place, their intentions are to create a more powerful, 300cc four-stroke engine, if and when (and they’re counting on it) they are ready to go into production.

If you’re not an auto buff (pardon the pun) you may not realise that your average autorickshaw on the street runs on a 150cc four-stroke engine. We wanted to know what the difference was between a SAZ and an auto.
Zeeshan, one of the developers explained that stability, comfort and choice of fuels were major differentiators… but that the piece de resistance was something called ‘a hydro mileage booster.’ High tech stuff.

We actually took a ride in a SAZ. On the campus grounds. It felt pretty similar to a car and much better than an auto. The team has a long way to go but the signs are very much there. So we talked a little to find out the what, the where, the why and the how.

Q: Ok, most important thing first. How has this affected your popularity with the girls in your college?
Sanu Rahman: I was already popular in college for making mini projects in robotics and I even used to make final year projects for my seniors and earn pocket money out of it. But, yes it did affect my popularity with the girls. In fact, while shooting for a news channel recently, one girl broke all boundaries of normal social conduct and kept trying to indulge with us just to be on camera. But seriously, We exhibited SAZ in an exhibition held by T John Institute of Technology where we got the best innovation award.
Zeeshan and Arif: (Laughing) Nice question. Well certainly it did. Not only with girls in our college, but teachers and students of all the departments too. But girls, yes it definitely did make us popular.

Q: What’s SAZ and what does it do?
Sanu Rahman: The objective of our project was to build a vehicle, which would be a convergence of a car and a motorcycle. It is half the width of a conventional car.

It has a small and compact engine of lower cc than regular cars on the roads today and this saves fuel consumption. The engine runs with petrol as well as LPG giving the driver a wider choice of fuels.

I’ve always felt the need for smaller cars on Indian roads. I would follow auto exhibitions held around the world and automobile magazines. The exposure gave inspired me to design a smaller and more versatile car. I conducted surveys among my relatives and friends, took their feedback and tried to include it in my design. I was also inspired by Ratan Tata, who tried to launch Tata Nano at price of Rs 1 lakh only but its price further got raised and off track.

Zeeshan and Arif: This idea came to us looking at the road accidents that occur with the two wheelers and of course the traffic in Bangalore and parking issues in major shopping areas. SAZ was basically created to target middle class Indian families who can’t afford to buy a four-wheeler. Our prototype has better fuel efficiency and more mileage than any other four-wheeler on Indian roads. Its sleek and futuristic design gives it an advantage in today’s Indian traffic conditions.

Q: What does SAZ mean?
Zeeshan and Arif: SAZ was named after ourselves. The first letters of our names.

Q: Can you tell us what’s different about this car and how it came to be?
Sanu Rahman: I started designing this concept in my 7th semester. I incorporated some new innovative ideas like an independent floating suspension system, which is a totally new concept in terms of the stability of the car. I also added a tilting mechanism, which tilts the whole car to maintain the action of the centrifugal force while turning and maintaining balance. It gives the car the pleasure and manoeuvrability of a motorcycle with the protection and safety of a car.

The body is compact, small and robust and we also took care that it should be aesthetically appealing. It can accommodate 3 - 4 people. It’s equipped with a hydro mileage booster which uses a special, conditioned, high frequency pulsed current to fracture water into a gas called ‘brown gas’ which can be efficiently generated. As this combustible gas is used in a buffer system, there is no need for storage. It saves space and is safe. This gas is generated as per the fuel demand which makes it energy efficient. (The hydrogen boosts mileage and the oxygen is released in the car gives the passenger a rejuvenating experience.)

I already had the required tools with me as I used them for my earlier academic projects and so we saved lot of money on fabrication and machining. I also handled all the technical aspects like designing, selection of parts from Shivajinagar scrap junkyard, implementation and troubleshooting.

Zeeshan and Arif: As team members, we used to do most theoretical calculations for the tilt suspension, fabrication work and some of the design features. We are from Bangalore and we were strong in the theoretical part like dimensions and fabrication of all types.

Q: How is this car different from an Auto rickshaw?
Zeeshan: Well, firstly because unlike an Auto rickshaw, which is a commercial, public mode of transport, we aim to position this car as a privately owned vehicle. It’s much safer than an auto as it is a four-wheeler and is more stable.

Q: Your prototype contains a 150 cc 2-stroke engine, which is no longer in production. Explain.
Zeeshan: Well, as this is a college project and we had time constraints, we used a second-hand 2-stroke engine. However, if we go into production, we plan to have a 300 cc four-stroke engine.

Q: Do you have a business plan in place for Saz?
Sanu Rahman: Yes, there is a business plan for SAZ. I am reconstructing and improvising my earlier designs and trying to make it more economical. It will be complete in a couple of months and we will approach companies for further development and manufacturing. Our Professor Ramchandra is handling SAZ’s marketing.

Zeeshan and Arif: We are planning to get our model patented before we approach companies. We also plan to make it lighte and more stable for Indian roads.

Q: How much do you think you would price SAZ at?
All: Our potential customers are middle class people who have the budget for buying a bike but dream of owning a car. They’re people who often like to drive alone or with 2 or 3 people extra like office colleagues, friends or small families. Considering all the above factors we are trying to price SAZ at approximately Rs 75-85,000.

Q: What were the major challenges you had to face?
Sanu Rahman: Well it’s easy to visualise. It’s harder to implement ideas. I was confident because I had worked on lots of projects since my school days.
Initially, we decided to fabricate it using the services of a professional, butthey quoted so much that it went way off our budget. So I convinced my teammates that we needed to build SAZ on our own. Getting my teammates to follow my lead was a greater challenge for me as I was used to working by myself in all my earlier projects.

Budget was a major problem for SAZ. It was funded by our parents. We faced a lot of price constrains buying parts for SAZ. Our pockets were getting emptier day by day due to which our work got delayed a couple of times.
Hiring a work place was a challenge too as the college didn’t provide the required space on campus. We needed a workshop. Fortunately, I had a friend, Syed Rafiq, who owned a workshop near the college. He provided space for fabricating our chassis and engine modification.

For the bodywork, we needed a bigger space and we had to move to a different location. Again, fortunately, my team mate Arif had a friend named Syed Mohsin in Fraser Town who owned a water service station for cars and had enough space to allow us to carry out our work there.

We had to work with no shelter under the scorching sun all day due to which we fell sick a couple of times. Due to inexperience, Zeeshan got his finger cut while doing work with the grinder. I got a neck infection due to the shooting particles that hit me while grinding. And fell ill due to the stressful environment. But all of this did not stop us from turning our vision into reality.

Zeeshan and Arif: We used reverse engineering concept to finish the project on time. The first major problem we faced was designing the chassis which took us almost 2 – 3 weeks. We had to make it strong, while lowering its weight. The second problem we faced was during fabrication. Since most of the work was done on site and not calculated before hand, due to our inexperience, we faced complications - like the right dimensions that should be used to achieve good strength.

One of the major problems we faced was with the engines. We used 3 different engines for our project and that took most of our time during the 3 months.

Q: What was your work day like?
All: We commuted almost everyday and worked 10-12 hours to finish our project on time. Every morning we used to call each other and decide what work had to be done that particular day and tried to complete that work on the same day itself.

Q: What are your future plans regarding the car?
All: We are planning to take this car to different auto shows conducted in Bangalore. Also get it patented and approach 2-wheeler companies. Then hopefully get started with the marketing and production, which will mostly take another 2 years.