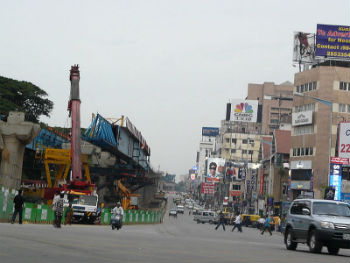 Bhoopalam P Srinath, of the Bangalore Traders Association and other merchants on MG Road, who had been so hopeful about the Bangalore Metro, now sing a story of despair and hopelessness.

It has been nearly two years since the long awaited Metro began operations from MG Road. During the process of the Metro’s construction, MG Road – the main commercial hub of Bangalore - took a real beating in terms of construction potholes, debris, broken pavements, footpaths and other necessary evils. Merchants on the street, some of Bangalore’s most well-known retailers like Deepam, Vijaylakshmi, Central Cottage Industries and others, willingly swallowed inconveniences and losses in the hope that the new Metro would double, triple and maybe quadruple their earnings.

But if only things were that simple.

They are still waiting. Nothing has changed. Bangalore’s once glorious shopping hub is in shambles and the traders, some who have been there for many, many years are now looking for answers.

We spoke to Bhoopalam P Srinath, President of the Bangalore Traders Association who spoke on behalf of the hundreds of businesses that operate on MG Road, some of them for over 100 years.

How many stores are there totally on MG Road?

Its not only the business houses, it also the commercial establishments. So including everything there are around 200 shops.

What’s is the problem on MG Road?

The main issue is the state of MG Road - the main commercial hub of Bangalore. The Metro took nearly seven years to complete and for all those years we (traders) suffered and sustained heavy losses.  There was a lot of debris and lot of traffic issues—the infrastructure conditions were bad and during that time, all of us lost business by 40-50 percent. But during that time, we thought was ok, since the Metro was going to be the main answer for all traffic woes in Bangalore. We really thought that once the Metro started running; things would take a turn for the better and that people from all over Bangalore would have good access to MG Road.  We were sure that our business would improve.

But it’s been two years now since the Metro started from MG Road to Baiyapannahalli and the situation is still the same. They (BBMP, BMRCL) are taking their own sweet time to repair all the infrastructural damage.

It would seem that they are more interested in the Boulevard, would you say?

The other side (MG Road Boulevard), yes, they have definitely done a very good job-- where the metro station is. They have made that boulevard stretch very nicely and have done a lot of beautification. But this side -- the main side where the customers walk around and shop, has been completely neglected.

We have raised this issue numerous times. With BMRCL and BBMP. In fact, we have been writing letters to BBMP since 2000 about the deplorable condition of this road—the broken tiles, bad pavements, potholes. But nobody did anything and nothing happened. Meanwhile, the Metro work and construction started and we thought that since things were going to get spoilt anyhow, we’d just wait for it to finish. And once the Metro was complete, we assumed that they would restore the road the way they restored and beautified the other side.  But as we all can see, that has yet to happen.

You see the conditions here on the footpath (pointing at the street) there are a lot of potholes… it’s terrible. Broken pavements… it’s all a big mess here. This should not happen to a place like MG Road. And since Metro started running around two years back, we have been continuously following up but nobody has bothered to take any action.  And we had no other option but to go to the press with this issue.

And to think that foreigners have always come to MG Road first. For travellers, MG Road has always been a ‘must visit’ place.

With malls mushrooming all over the city, do you think MG Road is still the heart of shopping in Bangalore?

If you go to a mall, primarily it is all window-shopping. In malls, if you ask any shopkeeper about business, they are not happy. Definitely all the actual shopping is happening on MG Road.

Are you saying there’s no increase in business after the Metro started functioning?

After the Metro started running, although there has been a 30-40 percent increase in sales, it hasn’t compensated for the loss incurred over all those years of construction. This 30-40 percent is not sufficient, we expected a 100 percent.

Only then can we recover the loss and move ahead with the times in terms of rentals, overheads, salaries etc. that have gone up. This 40 percent increase in business is only covering our expenses and that’s it. It does not generate even a marginal profit.

So is there any thing positive at all?

Thanks to the Metro, a lot of people from Baiyapannahalli  and Indira Nagar are coming to MG Road more regularly. There is a good influx of people for shopping. This crowd is travelling happily and comfortably in the Metro to MG Road. And once all the city corners and Metro phases are completed, our business will surely improve.

But my point is not only about business, it is about the comfort of all these people who visit the area. There is Cubbon Park where people like to come, the cricket stadium is nearby and then the main Metro station is here. So this whole belt is where people like to come, shop and just roam around. So it’s very important to take the comfort factor into consideration.

Tell us about parking. It seems impossible here.

We are also asking for pay and park, just like on Brigade Road and Commercial Street. The police have agreed and have given their go-ahead. I spoke to the Commissioner and he said that it’s no problem. In fact, they are more than happy because once it becomes pay and park then it will become more systematic and shoppers will get sufficient space. Right now what happens is people come and park their vehicles all day. All that will be done away with. Only actual shoppers will come, park their vehicle for one or two hours, shop and go—similar to how it is on Brigade Road.

Look, on this entire MG Road stretch, we have about 70 bays of parallel parking. In a day, if you take about 10 hours, on an average about 13 cars can come and go per bay. So 70 bays means-- about 1000 cars can come and go.  It will be comfortable for everybody. But again, the status of this rule is that although BBMP has passed the resolution, they have not called for any tender and have not given permission to any association.

We are writing to all the new commissioners who come to BBMP. But neither are they implementing it nor have they bothered to answer us.

Also, in between the pillars of the Metro station, near Coffee Day, there is enough space to accommodate two-wheeler parking. Even on the MG Road-Kamaraj Road corner, there is an entire area that can be used for two-wheeler parking. We will soon be meeting with the officials to discuss that. It can, to a great extent, solve the parking issues on this road.

Why do you think there are so many potholes on MG Road?

Whenever it rains heavily, from one or two higher points on the road, water falls with great force and that is extremely dangerous for motorists, especially for two wheelers. And it is because of this, that the potholes have been created. We made a ‘big galata’ (a hue and cry) in the media, so they (BBMP) fixed it. Since then, it hasn’t rained as heavily. But I’m sure when it really pours again, the potholes will be back. I called one of the top officials with regards to this matter and he said, “let it rain, then we’ll see.”

So again we’ll have to shell out our hard earned tax money into fixing it. And it will definitely break. It has nothing to do with the BBMP’s excuse that there is some underground leak causing it.

There is no convenient way to move across the two sides of MG Road. Your views?

Yes, it’s inconvenient. There is a barricade between and people cannot cross, except for one pedestrian crossing. And then people cannot park on that side of the road (the boulevard side). They have no other option but to park on this side. How are they supposed to cross over to that side? They have to walk all the way to either corner (from the Metro station all the way up to Anil Kumble Circle, a good 10 minute walk) to cross over. There is nothing in the middle. Something definitely has to be done about that.

With hope in their hearts:

“Yes, we surely welcome the Metro. Yes, there have been infrastructural issues but the time lost is lost. We’re sure MG Road will soon regain its lost charm.” - Vishal Saboo of Saboo Silks.

“We do welcome the Metro provided all the areas of the city are connected as currently we are not getting traffic from all over the city.” – Mukherjee of Central Cottage Industries

“The Metro is fantastic. MG Road is the city’s main hub and now a lot of people including shoppers, office goers etc can travel conveniently to MG Road. The potholes and broken footpaths definitely need immediate attention. I feel wonders can be done on that road as it is a small stretch. With the use of good technology and manpower, that road can be transformed overnight into something similar to what you see in Singapore or Dubai.” – Pramila of Deepam Silks

Known as ‘South Parade’ in the pre-independence era, it was renamed ‘Mahatma Gandhi Road’ on 26 February 1948.
The shopping area around South Parade ground (Now MG Road) was once called Blackpally (after the Black death in 1898-99).
East Parade Church on MG Road was the first building in Bangalore to get electricity.
The Plaza theatre was constructed in the year 1936 on the South Parade (MG Road) and was used by the soldiers for viewing Hollywood movies. It is now part of the Metro bridge.
Trinity Church on MG Road was the oldest garrison church in South India.
Construction work for Phase I of the Metro was scheduled to start in 2005 but kept getting delayed and finally commenced on 15 April 2007. It was completed on October 20, 2011.