Home | toxic thursday | Why The City Loves Its Strays 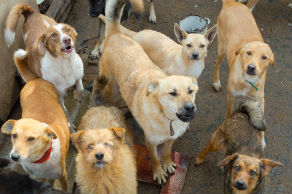 Most cities don’t know how to deal with its population of stray dogs. Animal activists and dog lovers in Bangalore speak to explocity about man’s best friend.

Is it true that Bangalore loves its strays?
I am not sure about that. We have two strangely polarised groups here - one set of dog haters and one set of dog lovers. Each group is often quite intense in its reactions. As an organisation working for dogs and all other animals, we often find it difficult to resolve issues amicably. However, we find that dog lovers are amenable to solutions and alternatives in finding peaceable methods of co-existence. Dog haters, who generally do not term themselves that way, (all profess to love their dogs, but find it difficult to extend that understanding for the homeless ‘strays’) are more inflexible in their views.

Core issues that need to be immediately addressed with respect to the stray dog situation in Bangalore?
Since the ‘stray’ dog is part of our urban landscape and is here to stay, we all need to ensure that they are healthy and vaccinated, friendly and sterilised. It would be more logical and sensible to have them accepted by all apartment complexes, building societies and associations. This would ensure healthy populations and a gradual decline in a phased manner. If they have behaviour or health problems, then the individual animals can be addressed by city shelters and NGOs.

What attitude changes do you think are most required, both on the part of the citizen as well as the government, when it comes to addressing this issue?
It goes without saying that the issue has to be dealt with both compassion and logic. After all, we are dealing with sentient lives. The citizen has to ensure that the BBMP and the ABC programme works in tandem and that the NGOs engaged with the programme are working in cohesion with the BBMP, and the citizens.


Roughly, how many stray dogs does CUPA rehabilitate in a year?
CUPA deals with approximately 3,000 to 3,500 dogs per year. This is indicative of only the trauma cases which are treated and healed and the dogs which are adopted and rehabilitated through our efforts and existing infrastructure.

Since the suspension of the CUPA shelter, where have the dogs that were housed in the shelter prior to the suspension been relocated? For how much longer will this suspension continue?
The dogs are housed are in various other centers. There is a tremendous shortage of space for trauma cases and housing of injured animals. We are still totally at a loss how to deal with the growing public pressure since it is public knowledge that the State Government has given a directive that the shelter lease be renewed for the rescue and treatment of stray animals. However, the same has not yet been implemented due to various reasons. We are very hopeful that the Veterinary College will be sympathetic to the needs of the city and public sentiments.

Does Bangalore love its strays, that is the question. The word ‘stray’ here, however, is a misnomer. Bangalore doesn’t love its strays. But its dogs. And, going by the numbers, Bangalore seems to be home to a breed of its own. The Indian dog. Not stray, please note.

Achala Paani has one request when she speaks to us over the phone. “Can we please refrain from calling these dogs ‘strays’,” she asks, even before we can clarify that that’s exactly the point we’re making. Or attempting to make.

Paani is Founder and Managing Director of Let’s Live Together, an NGO in the city that strives to promote adoption and fostering of Indian Dogs. Founded in 2009, Let’s Live Together is a registered animal protection organisation, working for the welfare of homeless animals in Bangalore. The NGO promotes the concept of adopting homeless dogs instead of buying breeds.

Paani was working with an advertising firm, when a dog close to hers – from her college days at Karnataka Chitrakala Parishath – met with an accident, only to be paralysed for seven months thereafter. Caring for the dog meant 24x7 care, and so, Paani quit her job to be with her dog, her friend. Due to a severe spinal injury, doctors had given up hope, she notes, of her dog ever walking again. But seven months later, there her dog was: up and running…or, walking. And that was her biggest inspiration, Paani maintains, when asked what moved her to set up Let’s Live Together.

"The quality of adoptions have gone up,” Paani notes, whilst highlighting the fact that even the well-to-dos, those who can buy a breed or two, prefer to adopt a homeless dog. “Adoption is the way to go,” Paani repeatedly stresses, as she relates to me a scenario she had recently come across in the city, that of a breeder cooping up dogs of high pedigree in tiny spaces - in rusted iron cupboards, to be specific. “Inbreeding is in a particularly bad state. But, breed or otherwise, this is not the way to treat dogs.”

So, in the past few years since her organisation has been up and running, does she believe that Bangalore loves the ‘Indian dog’? "Yes," Paani says emphatically, and adds to her appraisal saying that if one were to look back around four and half years back, one would be hard pressed to find people who owned ‘Indian Dogs’. “Today, however, the situation has changed,” Paani explains, “a lot of people are choosing to adopt rather than to buy.

A proud owner of a 12-year-old dog, Mansi Jaysal, founder of the Great Indian Dog Show, embarked on a mission a year ago. A mission that echoes the same sentiment Achala spelt out: to stop referring to dogs adopted off the streets as ‘strays’.

“In the past 12 years, every time I took my dog out, people everywhere would look at her and call her a stray, and that hurt. I have a great dog and yet people (including vets) would look down upon her, not allow her in dog shows and constantly refer to her as a stray,” she says. And indeed, with a loving home and a great friend in Mansi, why would she be called a stray? And thus the term Indian Dog started gaining popularity.

“The Great Indian Dog Show isn’t about stray dogs; they’re not strays. The show is about pets – adopted dogs. It attempts to showcase those people who’ve gone beyond the conventional approach of buying only pedigree dogs, giving two hoots about the taboo surrounding adoption of dogs off the road. “There is this inevitable assumption that all Indian Dogs are ‘strays’, when, in fact, all that the term refers to are homeless or ownerless dogs. For that matter, even an abandoned Labrador would come under the category ‘stray’,” reasons Jaysal as she stresses the need to change nomenclature where these dogs are concerned. “We need to stop associating ‘stray’ with the Indian dog,” says Jaysal, adding, “Indian dogs are known for their health and longevity; they’re naturally evolved and aren’t bred. My own dog – an Indian dog – which is 12 years old hasn’t had any health problems to date. On the other hand, Pugs are known to have eye problems and breathing issues. And I know of 7-8 year old Labradors with heavy thyroid problems. You don’t hear of these issues often when it comes to the Indian Dog.”

And what inspired her to begin the Great Indian Dog Show, which recently saw its second chapter unfold in the city? “When I had to take my dog to the vet, they wanted me to list out specifics such as breed etc. I got laughed at when I wrote down ‘Indian Dog’ as opposed to ‘stray’. Now, my dog is a pampered brat, and I can’t imagine him being on the street alone, even for an hour! This incident, however, made me realise that there needs to be more awareness on the fact that a dog is only made ‘stray’ by humans,” Jaysal explains.

“We initially set out to encourage adoption of these homeless dogs. But the Great Indian Dog Show managed to generate such media attention, that we ended up with people coming up to us with offers to foster these homeless dogs. And the fascinating thing about the show was that very few people who had come to the show came from the lower strata of society; plenty of BMWs and the like decorated the parking lot,” notes Jaysal, while stressing upon the fact that even those who can afford to buy dogs/breeds are opting to adopt instead.

While the first year of the Great Indian Dog Show saw some trouble in terms of reaching out to a wide audience – they even had to wait it out to reach a certain number of registrations; to find people who had adopted dogs and were willing to showcase etc – the second year saw a lot of newer participants; people who had adopted from them earlier had also come to be showcased at the event. And the fact that registrations had crossed 40 in the first week itself goes to show how the show had grown over the last one year.

Owner of 12 cats, three dogs and a part of the Great Indian Dog Show, Dylan Pinto believes that the show is all about respecting Indian Dogs. “It is important to remove the word 'stray' from defining pets. Owners need to be aware and proud and not shy away from this initiative,” he says. A dog show, especially for Indian Dogs, took the city by storm last year. With participants pouring in and an overwhelming response this year, the show has brought forward more supporters for the cause.

The criterion for entering the show? The dog has to be adopted, not bought or sold, says Jaysal. “Of course, there are crosses with Labradors, but we try to keep it as pure as possible. Where such crosses come up, we ask for a photograph, and also cross check with the owner. “

And what’s the format? "Well, there are some 20 odd categories. For instance, we had an 'oldest dog' category - the oldest was 18 - which sought to highlight how the Indian Dog outlives other breeds. But other than that, there are no tricks or such; we want the dogs to be natural.” While the spotlight is on the dogs, what makes the event all the more significant are the heart-warming stories people share as they walk up on stage – stories on how these owners rescued their dogs from hostile, near-death situations - from being burnt in boiling water at a restaurant to being thrown from a building. And if these stories don’t move you, then what will?