Instead, he drew himself together, took a deep breath and said, "Your arguments, my friend, are reductio ad absurdum." Eh? 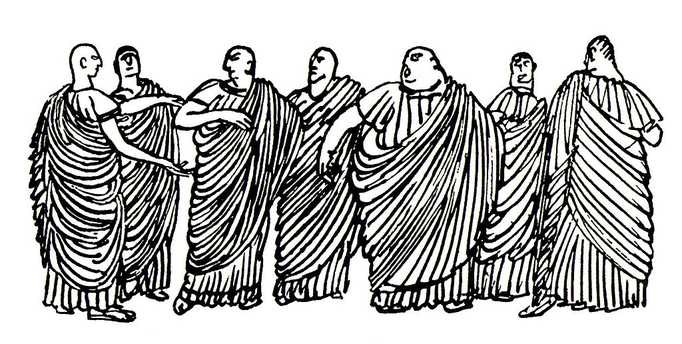 Yesterday, someone said something in Latin and I got gooseflesh.

This was a guy and his buddy at a coffee shop on Church Street, engaging in the sort of animated discussion that someone within earshot can't ignore.

The subject of debate was Twitter’s IPO strategy.

Now, nothing either of them said to the other was particularly befitting of a finance industry professional, nor were they even reasonably well informed. So, I could not even figure out why this issue would interest them.

I could tell they were a couple of local Bangalorean yokels like me - and like me, men who sleep without being troubled by burdens such as overseas investment portfolios. But animated they were.

One was a Twitter supporter and the other was not. They became more vocal, strong-willed, contrarian and plain ornery. The waiters hovered nervously. They looked like they would come to blows.

And two-fisted vodka consumption gave them the ruddy hue of intolerance.

I watched and listened with the same morbid fascination that I reserve for some Bangaloreans who, incomprehensibly, profess fealty to Liverpool and Arsenal, when most of them are unlikely to travel to England; and even if they did, will find neither kinship with - nor acknowledgment by - real British football fans. One "ardent Chelsea fan" whom I know well, travelled all the way to watch an English Premier League game and support "his team", only to be regarded as a curiosity in the crowd. A friendly individual asked him, "What are you doing here?" (He since switched to supporting the Kolkata Knight Riders.)

Two middle-income Bangaloreans publicly shouting each other down about the Twitter IPO was equally cockeyed.

At one point, the pro-Twitter guy referred to page 69 of the S1 (the SEC filing document) and impressively, trotted out statistics about the 85% increase in Twitter’s spending. He said that was good because it pointed to Twitter’s belief in its own growth strategy. That's why, he said, they were spending money on more office space and staff. If, on the other hand, Twitter was decreasing its spending to meet the revenue line, it would mean trouble. Only "short-sighted fools", he offered, could not see the value in that.

I half-expected the only short-sighted fool in the discussion to leap out of his seat and smite his friend’s noggin, whilst expressing extreme dislike of Twitter. Instead, he drew himself together, took a deep breath and said, "Your arguments, my friend, are reductio ad absurdum."

I like new words and phrases, even if they are old words and phrases, but who was this guy? Was he an economics scholar, Greek historian and Romansch dialectician? Was he a Latin grammarian masquerading as a local lout? Reductio ad absurdum simply means taking an argument to an absurd level to make sense of available facts. It means proving something is right by proving that the opposite is wrong. It is a fancy pants way of telling someone to screw off.

But the situation had just got much more bizarre.

Not only were these two impoverished Bangaloreans expostulating uselessly about the Twitter IPO; they were now doing it in Latin.

The friend struck a pose. He riposted as would a classical poet, "Your arguments are wings on a flightless bird. The Twitter IPO will happen. Dictum factum, my friend!"

And just like that, they went from two drunken rowdies about to beat each other up, to two stylish gentlemen who respectfully disagreed... in Latin.

Naturally, I chatted them up.

I discovered both were HR managers at a local firm and both had law degrees. It figured. Practicing lawyers have developed a criminalist's tolerance of humanity; they rarely engage in cocktail party debates. Those with only a conceptual or theoretical grasp of law love to expound on legal concepts.

But given all that, everyone must cope with the executive and judiciary; and so, much Latin gets tossed around in the mix, like walnuts in a salad.

In the Bangalorean growth of the last two decades, much of the new mass labour of the city was composed of white-collar workers, like call centre operators, software coders and similar BPO employees. The importance of the HR manager had never grown anywhere as it did in Bangalore.

And because Latin plays an important part in formal communication, I believe there has been a greater per capita consumption of Latin in Bangalore than anywhere else in India.

But our affinity with Latin is mechanical and we remember phrases like we remember names, such as "Mahalingam", but without knowing what it means. That was the case with my Twitter aficionados who had picked up stray Latin without forethought, like a verbal gonorrhoea.

Because I could not get past the idiocy of their arguments about the Twitter IPO, I asked them why they fought over it. Endearingly, they said they were great pals but fought over everything, without purpose.

When I complimented them on "dictum factum" and "reductio ad absurdum",  they were at once self-deprecating and said they had taken an online course in Latin for their law degrees, but they sucked at that too.

One of them offered up a phrase, from Laurel and Hardy’s 1933 classic, "Sons of the Desert", to describe themselves: "Duae tabulae rasae in quibus nihil scriptum est."

Freely translated, it means, "Two minds and yet, not a single thought."

Not to be outdone, I summoned the waiter and ordered us some coffee in what little Latin I had learned and made like a bollocks: "O architriclinus! Ternio capuli placet."

The waiter looked at us pityingly and said, "That’s three coffees, right?"