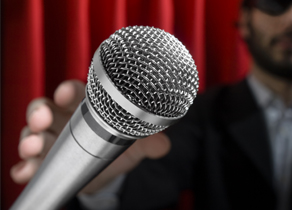 They’re rude. They’re offensive. They’re politically incorrect. They rant. They rave. They talk about things that people in polite company never utter. They pooh pooh tradition. They poke fun at religion. They talk irreverently of their wives and girlfriends. They’re self-deprecating. They’re hung up on sex. They pick on Punjabis, take pot shots at Tamilians and make fun of Malayalis. The IT crowd is a favourite target and NRIs are fair game for their humour.

Here are five decidedly funny fellows, people we consider to be the most hilarious the city has ever seen. And heard. And they’re packing the bars and clubs in the city with their own brand of humour in packaging that purports to be tasteless.

Ashvin Matthew, Sanjay Manaktala, Praveen Kumar, Sundeep Rao, Kenneth Sebastian are not afraid to be funny. And that’s not as ironic as it sounds. The funniest people in public are often not the funniest people in private. For example, Peter Sellers did not have the reputation to be the nicest guy to know.

Gil Greengross, an anthropologist at the University of New Mexico in Albuquerque was quoted by New Scientist as saying, "I guess the stage gives them the opportunity to be what they want to be and may not necessarily represent their daily-life personalities." He and colleague Geoffrey Miller gave standardised personality tests to 31 professional comedians. Comedians had lower scores on average for conscientiousness, agreeableness and extroversion, compared with the other groups of people who took the test.

However, the team said they noticed no difference in neuroticism scores.

Our five Bangalorean comics showed us no signs of what we think is neuroticism, but they did have a few things in common: they all said they were essentially shy. And they said they were compulsive approval seekers.

Indeed, during this interview, their effort to be funny came through naturally. One comic, when asked what he did to dig himself out of a depression  said, “I whack off.” And then did not want to be quoted. Kenneth Sebastian first described himself thus, “I’m awesome. I spread awesomeness.” And then almost immediately, he changed that to “I’m shy. I’m no good with strangers.”

Shy or not, their personalities are distinct and this is evident in their performances. Maybe this is one reason that these five comedians have been responsible for raising the standards of stand-up comedy in the city.

One regular comedy fan said of them, “We love them. We hang on to our sides and tears run down our cheeks.” She added, “And we’re women, so it ain’t a pretty sight.”

Here are five of Bangalore’s funniest.

He says he is a laughter-expert by profession. Ashvin Matthew is a name to reckon with in Bangalore’s comedy scene. He started making jokes to cover up for his drunken boss at an office party, and realised that he loved making people laugh.

“Entertainment comes easy to me,” he says. “Even as a child, I used to mimic the elders in the family and make my cousins laugh,” he recollects.

Matthew worked for a number of companies before he became a stand-up full time.

The veteran comedian cracks jokes on sex, machismo and the behavioural traits of men and women in bed.

“You know, yoga is never a good idea for men,” he says, “unless you’d like to twist and turn till you’re face to face with your balls.”

“When it comes to sex jokes, there’s a difference between being naughty and being vulgar. When you do it right, the audience gets the drift and loosens up after a couple of minutes,” he adds.

Ironically, the iconic stand-up comedian is moody and melancholic off stage. “I don’t know why, but like most funny people in the world, I’m a sad person inside. That is why, I guess, going up on stage and making a room full of people laugh makes me feel, well, powerful!”

Mathew believes that it’s a tough business being a comedian. “Different things make different people laugh. I, for instance, enjoy PJs. Once, a friend of mine cracked this joke about why the Anglo Indians are called ‘dingos.’ It’s because when the British left India, some of them ‘din go’. It cracks me up every time I think about it. It might not be as funny for others. The trick is to find what makes a room full of people burst into laughter at once. And that’s bloody difficult!”

“Once, my mother had asked me to perform at one of her parties. I proudly got on stage and went cracking joke after joke, and the audience sat there with a deadpan expression on their faces. It was such a fiasco that after the party, my mother said, ‘I need to help this boy set up a department store!’”

A man goes to a restaurant and asks the manager, “Yo, are you sure the fish was dead when you packed it with the chips?”

The guy retorts, “Then who the hell ate half of my chips?”

With his signature American accent and techie jokes, Sanjay Manaktala was an instant hit with the Bangalore audience when he first set foot on the stage in 2010. Co-founder of ‘The Polished Bottoms’ group, the IT professional from California moved to India and fell into the burgeoning stand-up comedy scene in the country.

“There’s nothing funny about being a stand-up comedian,” he states.

“People come up to you and say, ‘So, you’re a comedian, huh? Tell us a joke!” and then stare at you till you’re uncomfortable.

On a serious note, “The audience judges you within the first 30 seconds of the show. You gotta let them believe that you’re being spontaneous on stage, when in reality, a lot of hard work goes into your preparation,” he says.

His jokes revolve around the ‘Quarter Life Crisis’ of every twenty-something. “I like talking about things I spent a large part of life worrying about,” he says. Lousy jobs, making money, girl trouble and the likes form the crux of his material.

“At one show, I made this joke about a Hindu wedding of a couple that met on Shaadi.com. In the course of the mantras, I heard the pundit say ‘something-something-namah-Shaadi.com-something-namah,’ and burst out laughing before I even finished the sentence. The sad part was that the audience stared at me blankly.”

“My jokes relating to the IT industry are usually well-received. I once did this bit, where I talked about our American bosses visiting us here in India. After one such meeting with a female manager, this guy goes ‘Dude, that’s the closest I’ll ever get to a blonde chick in my life!’”

My jokes about girlfriends on Facebook are also widely appreciated, thanks to their relevance to our lives.”

There’s nothing pretentious about Praveen Kumar’s comedy. He speaks with a thick Tamil accent and makes fun of it. His “Weird, man!” bits have the audience in splits. Senior marketing strategist and father of a 3-year-old daughter, Kumar is also one of ‘The Polished Bottoms’.

“Not all jokes are funny. Some sound funny in your head. But when you present them proudly in your next show, you might end being the only one laughing at them,” he scowls.

His Tamilian identity is often the basis for his material. He defends Rajnikanth, trashes call centre jobs and regales the audience with witty things his little daughter says.

“Once, a young girl lost her virginity. Rajnikanth found it and returned it to her,” he said during one of his shows, and the audience cracked up.

Kumar spends 2-3 hours a day working on the material for his shows. “People remember jokes. The last thing I want is to be booed off the stage.”

“I love my family to bits. A lot of my jokes are inspired by them,” he smiled.

“Sanjana, my daughter, loves to imitate me. When I shave in the mornings, she pretends to shave. When I put on my shoes, she puts on hers. When I screw up, she falls at my wife’s feet with me!”

“Once, when I was making a joke about the movie Evil Dead, one guy from the audience sneezed so loudly that he distracted the crowd. I called the sneeze ‘Evil Dead-6’ and managed to get them back in the groove.”

“Thanks to the frequent power cuts, I’m now a father!”

Rao is visually challenged. That does not stop him from being one of the city’s best loved stand-ups. Suave and hilarious, Rao was the co-founder of Bangalore’s longest running comedy night SNAP! at Bacchus Lounge.

Instead of exploiting existing stereotypes, the comedian reinvents them on stage. He specializes in improv comedy and his subjects include a mix of all things he finds funny.

“In improv, it’s always good to leave a little bit to chance,” he says, “but I make sure I stick to topics that I’ve researched sufficiently, and stay away from politics and religion. One inadvertent comment on a sensitive issue and the show’s over. I like to keep my time on stage happy and light.”

“While spontaneity is a huge strength, one needs to back it up with content. I use exaggeration and punch lines to add zing to my bits,” he said.

“I’ve trouble with my eyesight, and sometimes I end up addressing a lady in the audience as ‘sir’ or lose sight of the microphone,” he admits. “Anything apart from that can be fixed with a witty remark or a comment,” he laughs.

“The bits I do about a Punjabi guy in an IT job are very popular. The way many Punjabis use jargon can be entertaining. When I imitate them, the audience seems to enjoy it.”

At age 22, he’s one of the newest comedians in the local circuit. Filmmaker, guitarist and theatre artist, Kenneth Sebastian, is cute to boot. Don’t be surprised if he erupts into a song or two in the middle of the show. He insists on blending music with comedy. Not a bad combo.

“The kind of comedy I saw at college cultural shows was nothing but a pathetic form of mimicry. And I felt I could do a lot better than that,” he says. “That’s when I won a chance to perform at The Comedy Store in Mumbai. The journey began there and I haven’t looked back since then.”

The budding artist does trial runs at open mic nights across the town. "At such shows, the audience is smaller and I get to field-test my jokes. If they pass, I carry them forward to bigger shows," he said.

"Once, I made a joke about religion and a lady in the audience took offense. She lectured me on how I should mend my ways for five long minutes, while I stood there on stage blinking. Man, was that embarrassing!”

"I ask people to shout out random words. And then I string them together to make a funny song. At one of my shows, I had to go on and on about constipation, herpes and bloody stools. The audience rolled on the floor laughing!”